The two inscriptions, in paleo-Hebrew writing, were found separately in a large First Temple structure within the span of a few weeks by long-term team members Ayyala Rodan and Sveta Pnik.

This burnt clay impression is the first archaeological evidence of the biblical name Nathan-Melech.

The inscriptions are “not just another discovery,” said archaeologist Dr. Yiftah Shalev of the Israel Antiquities Authority. Rather, they “paint a much larger picture of the era in Jerusalem.”

According to Shalev, while both discoveries are of immense scholarly value as inscriptions, their primary value is their archaeological context.

“What is importance is not just that they were found in Jerusalem, but [that they were found] inside their true archaeological context,” Shalev told The Times of Israel. Many other seals and seal impressions have been sold on the antiquities market without any thought to provenance.

This in situ find, said Shalev, serves to “connect between the artifact and the actual physical era it was found in” — a large, two-story First Temple structure that dig archaeologists have pegged as an administrative center.

“It is not a coincidence that the seal and the seal impression are found here,” said Shalev.

According to archaeologist Prof. Yuval Gadot of Tel Aviv University, in the 8th century BCE, this area of the City of David becomes the central administrative center of Jerusalem. The newly unearthed two-story public building, constructed with finely cut ashlar stones shows, illustrates the beginning of a westward move of the administration area in the large sprawling city.

The multi-room large structure bears clear signs of destruction in the sixth century BCE, which likely corresponds to the Babylonian destruction of Jerusalem in 586 BCE, according to the IAA press release. The destruction is evident through large stone debris, burnt wooden beams and numerous charred pottery shards, “all indications that they had survived an immense fire.”

The large administrative center, said Shalev, is further down the slope of the City of David than where some archaeologists had envisioned a First Temple-period city wall. Through this evidence of a large administrative center, scholars are beginning to understand that Iron Age Jerusalem saw the beginning of the western spread that continued in the future historical eras, including the Persian and Hellenistic periods.

“These artifacts attest to the highly developed system of administration in the Kingdom of Judah and add considerable information to our understanding of the economic status of Jerusalem and its administrative system during the First Temple period, as well as personal information about the king’s closest officials and administrators who lived and worked in the city,” said Gadot and Shalev in the IAA press release.

For linguists, the pair of one-centimeter inscriptions are likewise opening new scholarly horizons. Based on the script, Dr. Anat Mendel-Geberovich of the Hebrew University of Jerusalem and the Center for the Study of Ancient Jerusalem dates them to mid-7th century to early 6th century BCE.

On the blue stone seal, written in mirror writing from left to right, is inscribed the name “(belonging) to Ikkar son of Matanyahu” (LeIkkar Ben Matanyahu). Private stamps were used to sign documents, and denoted the identity, lineage and status of their owners, according to the IAA.

The word “Ikkar,” meaning farmer, appears in the Bible and other Semitic languages, according to the Hebrew Language Academy. However, it is only used in the context of the agricultural role, not as a personal name. According to the linguist Chaim Rabin, the word Ikkar came to Hebrew through Akkadian, after being adopted from Sumerian, which is not a Semitic language. 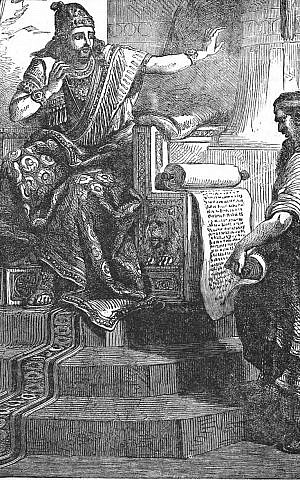 Mendel-Geberovich believes “Ikkar” refers to a personal name rather than an occupation. If so, this would be the first evidence of such a name. The other portions of the inscription are more familiar to biblical Hebrew linguists: “The name Matanyahu appears both in the Bible and on additional stamps and bullae already unearthed,” said Mendel-Geberovich.

What is most likely to capture popular interest is the burnt clay seal impression, which features the words: “(belonging) to Nathan-Melech, Servant of the King” (LeNathan-Melech Eved HaMelech).” The fact that it was written without a surname indicates his fame is on par with celebs of today, such as singers Madonna or Adele.

The name Nathan-Melech appears once in the Bible, in the second book of Kings 23:11. An official in the court of King Josiah, the biblical Nathan-Melech took part in implementation of widespread religious reform: “And he took away the horses that the kings of Judah had given to the sun, at the entrance of the house of the Lord, by the chamber of Nathan-Melech the officer, which was in the precincts; and he burned the chariots of the sun with fire.”

While the biblical account uses a different title than that impressed on the ancient clay, the title “Servant of the King” (Eved HaMelech) does often appear in the Bible to describe a high-ranking official close to the king. According to the IAA, the title appears on other stamps and seal impressions that were found in the past. In ancient times, seal impressions, or bullae, were small pieces of clay impressed by personal seals (such as the “Ikkar” seal) to sign letters.

But is this the very same biblical Nathan-Melech? That’s still a matter of interpretation.

Doron Spielman, vice president of the City of David Foundation, which operates the City of David National Park, said, “This is an extremely exciting find for billions of people worldwide. The personal seal of Natan-Melech, a senior official in the government of Josiah, King of Judah, as described in the second book of Kings. The ongoing archaeological excavations at the City of David continue to prove that ancient Jerusalem is no longer just a matter of faith, but also a matter of fact.”

However, scholar Mendel-Geberovich isn’t as quick to confirm the tie.

“Although it is not possible to determine with complete certainty that the Nathan-Melech who is mentioned in the Bible was in fact the owner of the stamp, it is impossible to ignore some of the details that link them together,” said Mendel-Geberovich diplomatically.

Read More:Archaeologists Discover King David’s City ‘Exactly Where The Bible Said It Was’