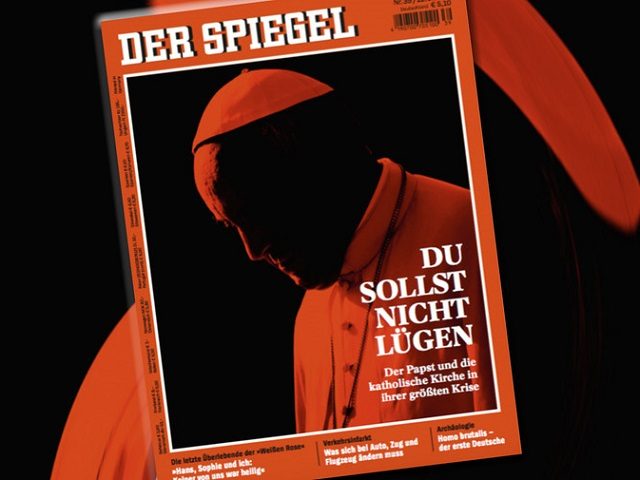 The German progressive weekly Der Spiegel has ended its love affair with the pope, declaring that the Church’s sex abuse crisis is “increasingly about Pope Francis.”

In a stunning cover article titled “The Silence of the Shepherds,” the magazine blasts the pope for his unwillingness to answer direct questions regarding what he knew about the serial homosexual abuse by U.S. Cardinal Theodore McCarrick and when he knew it.

An August 25 report from a high-ranking Vatican official declared that the pope was aware of McCarrick’s misdeeds at least as early as 2013—since the official personally informed him—and yet lifted sanctions against McCarrick that Pope Benedict had imposed and employed him as a consultant in naming new American bishops.

Yet when journalists asked the pope whether these allegations were true, and when indeed he had learned the facts about McCarrick, the pope neither confirmed nor denied the report, preferring instead the strategy of “no comment.”

According to Der Spiegel, Francis, who started as a “brilliant reformer,” now threatens to squander his legacy because “he often speaks at inopportune moments, yet in important moments remains silent.”

The German weekly also suggests that there is a good deal more resistance to the Francis pontificate within Vatican walls than is commonly believed.

One Vatican cardinal, who spoke with Der Spiegel under the condition of anonymity, said of the pontiff: “He preaches mercy, but in reality he is an ice-cold, cunning Machiavellian, and, what is worse – he lies.”

Der Spiegel drew on this statement for its cover title captioning a darkened profile of the pope: “Du sollst nicht Lügen”—Thou Shalt Not Lie.

But the pope’s bigger problems relate directly to the sex abuse crisis and the homosexual network that underlies it, Der Spiegel observes, and the pope gives the impression of dragging his feet rather than meeting the crisis head-on.

The Pope has convened a meeting of the chairmen of all national bishops’ conferences to discuss the matter of abuse — but not until February 2019. “This means that another five months will pass” before leading Catholic bishops travel to Rome to debate this matter with the pope, the article notes.

And now there is talk of the most serious crisis of the current pontificate, it states, and of a “civil war” among the faithful, which cannot be broken down along traditional party lines of conservatives versus progressives.

Rather, “whoever listens to the Catholic base, hears massive grumbling in the belly of the huge, worldwide community of faith,” Der Spiegel adds.

Francis is his own worst enemy, the magazine proposes. “He has been railing against global capitalism for years, but, like his predecessors, he took in millions from Cardinal McCarrick,” it notes. “The pope praises the value of the traditional family, but surrounds himself with counselors and workers who display the opposite — in more or less open concubinage with representatives of one sex or the other.”

And yet, “the man who is supposed to carry the torch of Christianity sees himself as a victim,” the article observes.

During morning Mass on Tuesday, Der Spiegel notes, Pope Francis compared his silence in the face of allegations with that of the Son of God during his Passion: “When people insulted him on that Good Friday and shouted ‘crucify him!’, He was silent, for he had compassion on those people.”

Victim or not, if the Spiegel article is any indication and the pope succeeds in alienating the progressive media, he may have lost his most important fan base of all.

Read More:Pope Tells World-Famous Photographer “I Am The Devil”- Then Laughs It Off

Read More:Pope Makes Another Blaspheming Comment: ‘Being An Atheist Is Better Than Being A Bad Christian’

Read More:HBO’s ‘Young Pope’ Portrays Pope As Cigarette-Smoking Manipulator Who ‘Lusts For Women, But Could Go Either Way’ And Doesn’t Believe In God

Read More:Pope Paving The Way For The One World Religion