Last Thursday, Greenland’s capital hit 75°F, which was hotter than New York City. This was the highest temperature ever recorded there in June — in a country covered with enough ice to raise sea levels more than 20 feet.

It comes hot on the heels of the hottest May on record for the entire globe, according to NASA. As the map above shows, May temperature anomalies in parts of the Arctic and Antarctic were as high as 17°F (9.4°C) above the 1951-1980 average for the month. 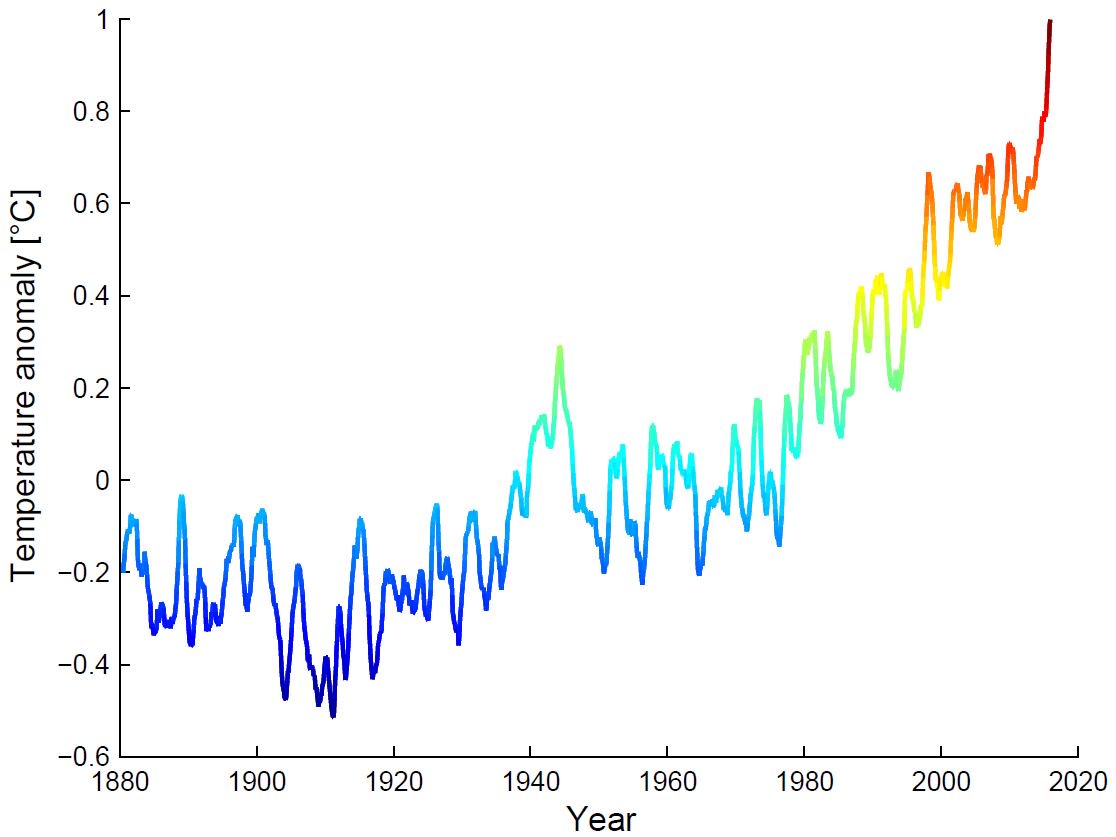 Greenland in particular has been shockingly warm this spring. Here, for instance, is “land surface temperatures for April 2016 compared to the 2001–2010 average for the same month” from NASA:

NASA reports that some parts of Greenland were 36°F (20°C) warmer than “normal” — and remember, in this map, the new “normal” is the 2001–2010 average, which means it already includes a century of human-caused warming.

As we reported in mid-April, rainfall plus scorching temperatures over the country jump-started the summer melt season weeks early. On April 11, a remarkable 12 percent of Greenland’s massive ice sheet was melting — “smashing by a month the previous records of more than 10 percent of the ice sheet melting,” according to the Danish Meteorological Institute (DMI).

The record temperatures in June also led to an unusually high ice melt — covering nearly 40 percent of the ice sheet:

Greenland holds the second-biggest chunk of land-locked ice in the world (after Antarctica), and its melt, by itself, could raise sea levels 20 feet.

Moreover, recent studies have suggested human-caused climate change is acting to melt the ice sheet faster than previously expected. An April study “found that the climate models commonly used to simulate melting of the Greenland ice sheet tend to underestimate the impact of exceptionally warm weather episodes on the ice sheet.”

Our new study does indeed add to the growing pile of evidence that amplified Arctic warming and sea-ice loss favor the formation of blocking high pressure features in the North Atlantic. These blocks can cause all sorts of trouble, including additional surface melt on Greenland’s ice sheet (the primary focus of this study) as well as persistent weather patterns both upstream (North America) and downstream (Europe) of the block. Persistent weather can result in extreme events, such as prolonged heat waves, flooding, and droughts, all of which have repeatedly reared their heads more frequently in recent years.

We need to slash carbon pollution at a much faster pace than we are now.