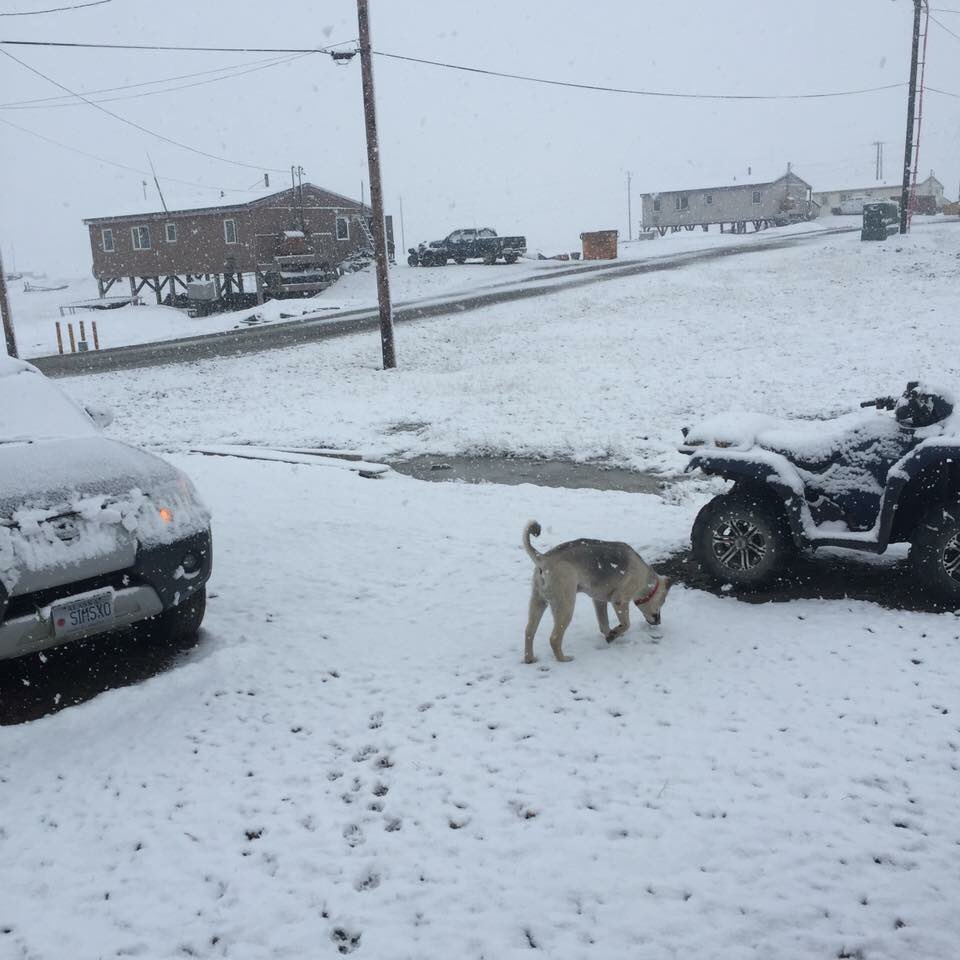 It’s June, and parts of the U.S. are dealing with record heat – but there are a few locations where a winter chill was in the air and a fresh blanket of snow on the ground.

According to Alaska 511, heavy snow was reported on the Dalton Highway between Sagwon and Deadhorse early Friday, with some snow reportedly sticking on the road.

From Wednesday into Friday snow fell along the Arctic coast, including the cities of Barrow and Katovik.

America’s northernmost city, Barrow, Alaska, picked up 1.7 inches of snow on Thursday, June 9, the largest daily June snowfall in just over 35 years, since a June 7, 1981 snowfall of 3.2 inches.

It was also the sixth highest June daily snowfall on record, there, according to the National Weather Service.

The snow tapered off on Friday morning in most locations and the National Weather Service cancelled the Winter Storm Warning for the area around the Brooks Range (south of the coast).

Wind gusts at Katovik  approached to 40 miles per hour and the temperature was still below freezing on Friday.

Despite that, snow along the Arctic coast of Alaska is not that rare in June.

Most locations average about an inch of snow for the month. This year, however, it’s somewhat of a surprise, considering how mild conditions have been.

Alaska weather blogger Dr. Richard James noted wet snow was even observed Thursday in the village of Umiat, about 165 miles southeast of Barrow.

James blogged that this is rather unusual in Umiat in June, with measurable snow only occurring in five other Junes of record since 1946.

This snow was brought about by a trough (dip in the jet stream) over northern Alaska, allowing cold temperatures to prevail. Within the trough, an area of low pressure formed just north of the state. The low and attendant cold front was responsible for lifting moist air at the surface, which produced clouds and snow.

With a building ridge over western and central Canada, the low was blocked from moving very much.

With all of the warm temperatures across Alaska over the past few months, it didn’t seem like wintry conditions would ever return, at least not in June. On the Arctic coast, Barrow has recorded above average temperatures for every month in 2016, and just chalked up a daily record high Monday, reaching 51 degrees.

The upper-level pattern in the atmosphere had featured frequent ridges of high pressure (bulges in the jet stream) that have produced the warmth over the past few months across Alaska.

Down In The Lower 48

If you would like to find wintry conditions this late in the season down in the Lower 48 states, look no further than at Mount Washington, New Hampshire.

The Mount Washington Observatory, where winds howl and snow falls most months of the year, sits at an elevation of 6,288 feet.

This past week featured some wintry days, thanks to the aforementioned sharp southward dip in the jet stream.

Wednesday and Thursday, a total of 1.8 inches of snow was measured at the observatory, accompanied by average wind speeds from 55-66 mph, according to observatory records.

A peak wind gust to a whopping 100 miles per hour was clocked during that time, and temperatures were stuck in the 20s all day Thursday. Wind chills dipped to around 0 degrees early Thursday morning atop the summit.

On Friday, the temperature was able to sneak above freezing and there was some light drizzle and fog reported.

On Sunday, another upper trough will move over New England and snow is in the forecast once again for Mt. Washington.

Snow showers there are not that uncommon in June. Average June snowfall is only 1 inch. In 1988, a June record 24-hour total of 5.1 inches fell atop the summit, and a June monthly record of 8.1 inches fell in 1959.

The average high temperature in June is around 50 degrees with a typical low in the upper 30s. June temperatures have tumbled as low as 8 degrees in 1945, and have rocketed as high as 72 degrees in 2003.

Typical sustained winds atop Mt. Washington in June are about 27-28 mph. A wind gust to 136 mph was once measured at the summit in June 1941.

You have to be a hearty soul, like the weather observers there, to endure these harsh conditions.