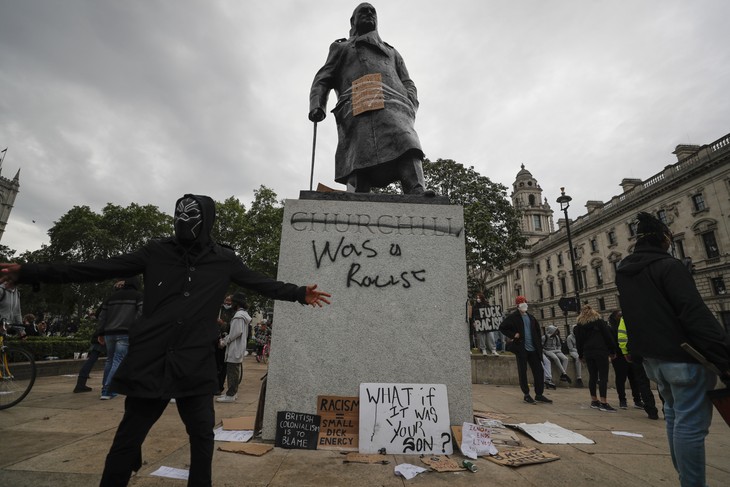 Miami imam Dr. Fadi Yousef Kablawi and British establishment academic Tom Holland are no doubt worlds apart in worldview. Holland even received numerous death threats a few years ago for his critical examination of the origins of Islam, and although Kablawi may not want Holland dead, he almost certainly disapproves of such inquiries. But there is one thing they agree on: the problem that the U.S. and the U.K. are experiencing now can be laid squarely at the feet of Christianity.

If you haven’t noticed the rioters, looters, and destroyers chanting “Jesus is Lord,” it’s because Kablawi and Holland would have you believe that the connection is more subtle. In a recent sermon, Kablawi asserted: “Christianity – the way it got corrupted – is the main reason for what we see happening in this country. Christianity.”

How could that be? It’s simple: the learned imam thinks that the riots are happening because Christian doctrine tempts believers to libertinism. Jesus died for your sins, so you can do anything you want, including, apparently, looting cities, and all your sins are paid for: “[Jesus] – that’s their god, as they claim – he was killed. But he was not killed for a bad reason, he was killed for your sins. So it does not matter what you do, as much looting as you do – at the end of the week, you are forgiven….Go [to church] on Sunday and confess or repent and you are good. As long as you believe that Jesus Christ died for your sins, you are fine. You tell me how such a religion will create good citizens.”

Kablawi’s punchline was predictable: “So what’s the solution for this aspect? Islam. Islam.”

Holland, for his part, is not likely to agree that Islam is the solution, or that the trouble comes from Christianity allowing for moral license (an idea condemned in the New Testament and declared a heresy in the earliest days of the Church, by the way), but he does agree with Kablawi in thinking that the real problem we have on our hands today is because of Christianity, or in Holland’s view, “the legacy of Christianity.”

Holland thinks that Left-fascists are destroying statues because of the lingering influence of Protestant iconoclasm in British and American culture: “The assumption that heroes should be morally perfect seems yet another legacy of Christianity. We demand saints, not the often terrifying figures that the ancients knew heroes to be: men whose greatness was often to be measured by their crimes as well as their achievements.”

A reader pointed out that Holland’s claim contradicted the Christian doctrine of original sin, that “all have sinned and fallen short of the glory of God” (Romans 3:23). If the rioters had believed in that central Christian idea, they would have done exactly the opposite of what Holland said: instead of expecting perfection from heroes, they would have understood that they were imperfect, and not pulled them down for not meeting their arbitrary standards. Holland then clarified his position thusly: “Indeed yes. Christianity does teach that we are all sinners. But as the doctrine of original sin evaporates from public consciousness, so what remains is a kind of Pelagianism: an assumption that we can – should – attain perfection without divine grace.”

But of course the distinction between Christianity and its legacy is exceedingly fine when one is examining the motives of the destroyers: either they were motivated by Christian ideas, consciously or not, or they weren’t. Holland’s position involves a refusal to acknowledge the ideological forces that are really at work in the destruction of the statues. And while it is certainly true that Marxist thought owes something to the legacy of Christianity, Marxists have persecuted Christians and tried to destroy the Church everywhere they have held power. Is that irrelevant? To ascribe their deeds to the legacy of Christianity would require ignoring what Marxism actually is.

Holland’s work has been featured lavishly on the determinedly anti-Christian BBC, so it is perhaps not surprising that he would focus on a tenuous (at best) Christian influence in the riots and destruction of the statues. But both he and the imam Kablawi are a manifestation of what is really wrong with the West today: a profound cultural self-hatred that has led to general contempt for our own history and heritage, and to the welcoming of the historical enemies of the Judeo-Christian West, despite there being no sign that they have discarded the doctrines that set them against Europe for over a thousand years.

The views of this Miami imam and British academic are two symptoms of a much deeper malady. They are furthering the destructive work of the rioters by placing the blame at the feet of our own cultural and religious heritage when in reality the rioters are trying to destroy that heritage. Kablawi and Holland might as well take a hammer to Churchill’s statue themselves. And there are all too many others like them.

Read More:When Francis Signed The ‘Interfaith Document’ – Did He Fulfill A Crucial Prophecy Of The Anti-Christ’s Approach?