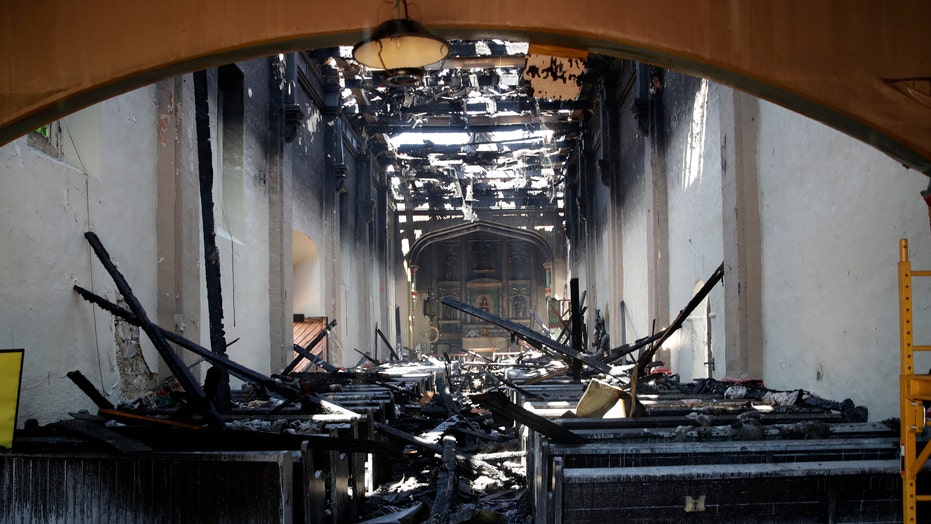 A slew of Catholic churches from Florida to California were burned and vandalized over the weekend as police continue to investigate whether or not they are connected to protests targeting symbols and statues.

Following George Floyd’s police-related death in May, Black Lives Matter leaders and protesters called for the toppling of statues, from Confederate symbols to former U.S. presidents and abolitionists. Activist Shaun King called for all images depicting Jesus as a “White European” and his mother to be torn down because they’re forms of “White supremacy” and “racist propaganda.”

Meanwhile, people on social media point out the lack of mainstream coverage of the weekend incidents.

“Churches are being burned to the ground. What?,” Mike Cernovich, a controversial right-leaning author, said in a video on Twitter. “Why is this not the biggest story of the day.”

Sean Feucht, a California worship leader and pastor, commenting on the incidents asked, “Where’s the outrage?” 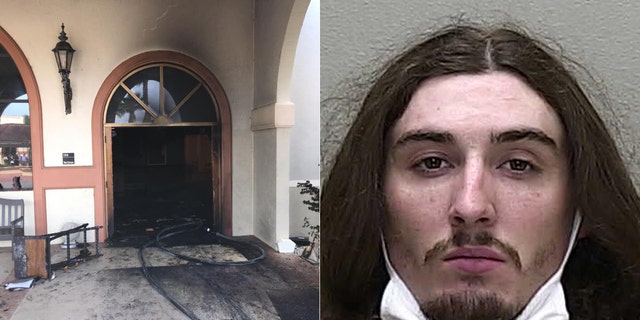 Steven Anthony Shields, 24, allegedly crashed his vehicle through the front doors of the Queen of Peace Catholic Church in Ocala and then set a fire in the building’s foyer area, according to the sheriff’s office. (Marion County Sheriff’s Office)

A man in Florida plowed his vehicle into the Queen of Peace Catholic Church as it was preparing for morning Mass on Saturday, poured gasoline in the foyer, and then set the building on fire before driving off, the Marion County Sheriff’s Office reports.

Steven Anthony Shields, 24, was arrested and charged with attempted murder, arson, burglary, and evading arrest. He told investigators what he did was “awesome” and that he was on a “mission” as he smiled and laughed while admitting to setting the church ablaze, according to an arrest affidavit obtained by the Ocala Star-Banner.

Shields, who lives in nearby Dunnellon, told a detective he has problems with the Catholic Church and has been diagnosed with schizophrenia and is not taking his medication, the Star-Banner reported.

Despite the church foyer being heavily damaged, Mass was celebrated Saturday and Sunday, according to the local news.

Historic California church goes up in a blaze 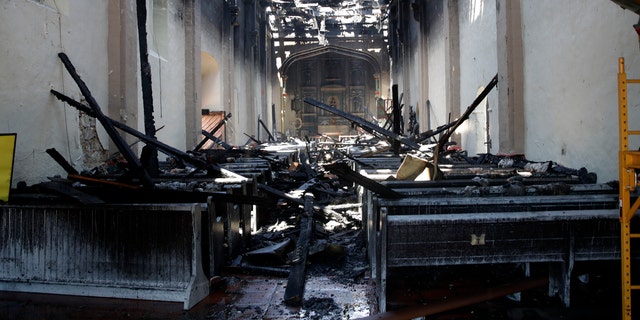 The interior of the San Gabriel Mission is damaged following a morning fire, Saturday, July 11, 2020, in San Gabriel, Calif. The fire destroyed the rooftop and most of the interior of the nearly 250-year-old California church that was undergoing renovation. (AP Photo/Marcio Jose Sanchez)

Around the same time as the Florida incident, a 249-year-old Catholic church in the Archdiocese of Los Angeles caught fire.

The San Gabriel church, which was undergoing renovations for its upcoming 250th anniversary, went up in flames around 4 a.m., burning the roof and insides of the church.

The cause of the fire is under investigation. But the recent destruction of monuments to Junipero Serra, the founder of the California mission system — whom Indigenous activists view as a symbol of oppression — will be a factor in the investigation, Capt. Antonio Negrete of the San Gabriel Fire Department told the local Fox 11 news outlet.

“This will be another box that they’re going to check off,” he said, adding, “It’s a tragic loss for our city. It’s our city identifier.”

A statue of the Virgin Mary was set on fire outside a Boston church Saturday night, NBC 10 Boston reports.

Boston police are investigating a reported fire outside St. Peter Parish at 10 p.m., where they found the burned statue. The flowers in the hands of Mary, the mother of Jesus Christ, were set on fire, damaging her arms up to her face.

“I was shocked,” Pastor John Currie told the local news.

He explained the statue was put up decades ago in memory of World War II veterans.

Another statue of the Virgin Mary was vandalized in New York City on July 10th.

The Diocese of Brooklyn announced police are investigating the incident in which the statue at Cathedral Prep School and Seminary in Queens had “IDOL” spray-painted on it at 3 a.m. Friday morning, the Catholic News Agency reports.

Fr. James Kuroly, rector and president of Cathedral Prep, called the incident “an act of hatred.”

“Obviously, this tragedy saddens us deeply but it also renews our hope and faith in the Lord as he has shown his goodness in the many people who have already reached out to us,” Kuroly said. “We are sincerely grateful for the help we have received as well as the prayers. Please continue praying for those who committed this act of vandalism and hatred toward Our Lady and the Church.”

Other church incidents over the weekend

Calvary Baptist is a historically Black church, though its website says it has become a “multi-cultural faith community” in recent years.

President Trump has adamantly opposed toppling any monuments and symbols, signing an executive order to protect them, and punish offenders with prison time.

Read More:Soon This Will Be Global: Chinese Christians Flee Amid Crackdown- ‘It’s No Longer Safe For Us’

Read More:War On Faith: China Tears Down Church With Worshippers Still Inside