Far-left activist Shaun King on Monday said all images depicting Jesus as a “white European” should be torn down because they are a form of “white supremacy.”

King made his remarks over a series of Twitter posts as historic monuments and statues have become the targets of anger and vandalism during Black Lives Matter protests in the wake of George Floyd’s death while in police custody late last month. 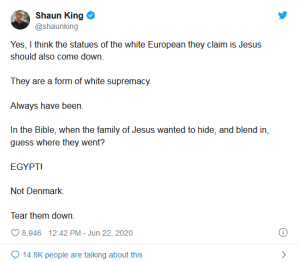 “Yes I think the statues of the white European they claim is Jesus should also come down. They are a form of white supremacy. Always have been,” King tweeted. “In the Bible, when the family of Jesus wanted to hide, and blend in, guess where they went? EGYPT! Not Demark. Tear them down.”

King followed the post up with another, saying that “white Jesus is a lie” and a “tool of white supremacy” created to help white people use Christianity as a “tool of oppression. He added that white people would never have accepted a religion “from a Brown man.”

King then tweeted support from taking down all imagery, including “murals and stained glass windows of white Jesus, and his European mother, and their white friends.”

“They are a gross form white supremacy,” King wrote. “Created as tools of oppression. Racist propaganda. They should all come down.”

Reactions on Twitter were mixed. Some agreed with King’s position, while others pointed out that cultures other than white Europeans have depicted Jesus in ways that resembled the local community.

Ethiopia, for instance, has depicted Jesus as black for more than 1,500 years. Likewise, images of Jesus appearing Asian can be found throughout the Far East. 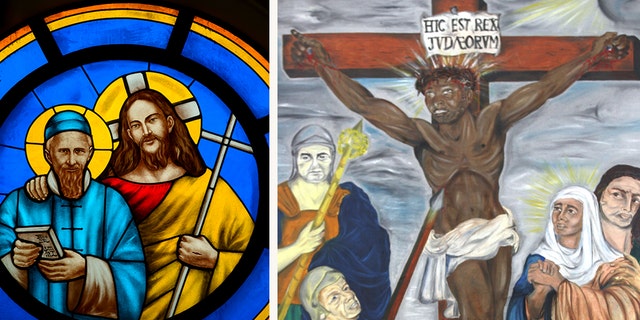 King was once a leading voice in the Black Lives Matter movement but fell from grace when his race was questioned and he was accused of being a Caucasian falsely portraying himself as black.

“I have been told for most of my life that the white man on my birth certificate is not my biological father and that my actual biological father is a light-skinned black man. My mother and I have discussed her affair. She was a young woman in a bad relationship and I have no judgment,” he wrote in 2015 amid reports that he misrepresented his race.

King was also a surrogate for Sen. Bernie Sanders’, I-Vt., having introduced him at the kickoff rally in Brooklyn last year for his failed 2020 presidential bid.

Read More:The Trail Of Blood On American Streets Leads To Soros And The Radical Left

Read More:Definitive Proof There Really Is A War Against Christianity

Watch More:Christian Persecution Coming To America: Prepare For The Wrath