More than 70 earthquakes have rattled the Ring of Fire, a huge swathe of geologically active tectonic plates stretching from South America to Australia via the western United States and East Asia, in the past three days.

First Venezuela was struck by a major 7.3 earthquake last night, with citizens across northern South America and parts of the Caribbean reporting strong shaking.

The tremor made residents nauseous, caused lamps to swing and led people to dash into the streets.

The quake was also felt in the capital of Caracas, where residents rushed out of office buildings, as well as in nearby island nations like Trinidad and Tobago, and St. Lucia, to the west and north.

Residents in Trinidad and Tobago shared video online showing some damage to buildings.

Then Vanuatu, located in the western Pacific Ocean was hit by a strong 6.7 magnitude earthquake.

The shallow quake’s epicentre was located just a few miles off the northern tip of sparsely populated Ambrym. 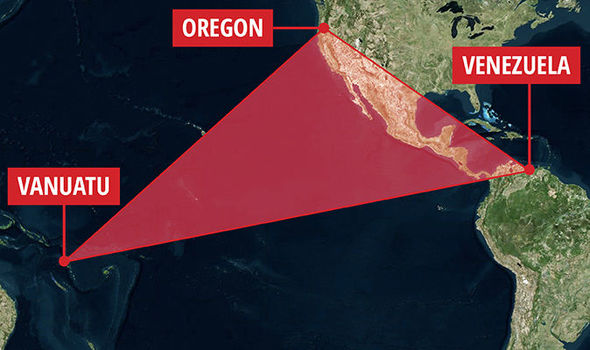 Pacific Ring of Fire: Venezuela, Vanuatu and Oregon have all been hit by strong earthquakes (Image: BING)

Officials at Vanuatu’s National Disaster Management Office in Port Vila, roughly 120 miles south of the epicentre, had no initial reports of damage.

“We felt small shaking for 15 or 30 seconds but we’re all good here,” spokesman Presley Tari told Reuters by phone.

The Pacific Tsunami Warning Center in Hawaii said there was no tsunami threat from the quake and authorities in Australia and New Zealand also gave the all-clear.

A third earthquake then struck off the coast of Oregon, United States.

An offshore earthquake with a magnitude of 6.3 hit 188 miles west of Bandon, Oregon, the United States Geological Survey (USGS) said. 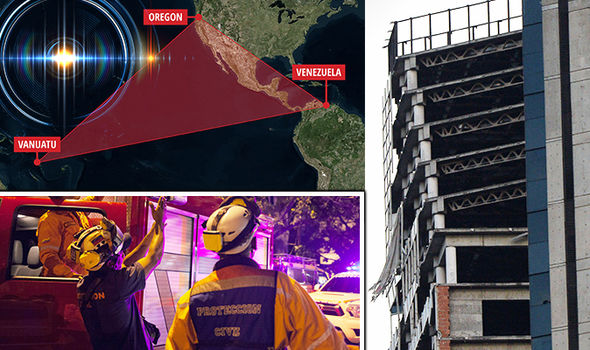 The Pacific Ring of Fire has been rattled by several strong earthquakes (Image: GETTY / REUTERS / BING)

The quake was recorded at a depth of about 10 km, according to the USGS website.

No immediate tsunami warning was posted.

And today Venezuela was again hit by a strong earthquake.

A 5.9 aftershock hit the north of the country this afternoon, sparking more panic in Venezuela. 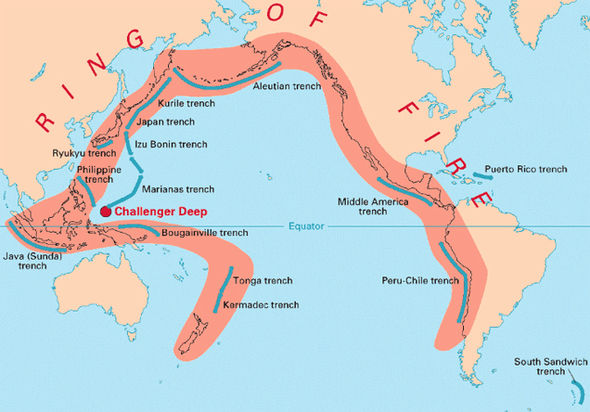 The Pacific Ring of Fire is the most geologically active region in the world (Image: USGS)

One citizen wrote on earthquake monitoring website EMSC-CSEM: “I was in the office and went straight under the table.”

Another said: “I was in a boat moored to a dock and felt the waves ripping the engine.”

It comes after dozens of other smaller earthquakes rattled the Ring of Fire, with more than 70 striking in the past three days.

It has increased fears for the ‘Big One’ earthquake in the western United States, or another megaquake elsewhere in one of the heavily populated Asian or South American cities on the Ring of Fire. 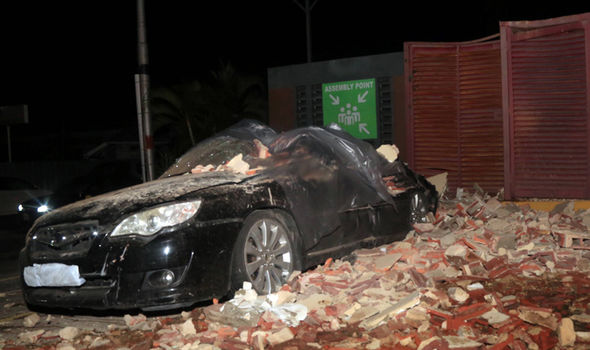 Richard Aster, Professor of Geophysics at Colorado State University, warned recently California is in an “earthquake drought” and overdue a 7.0 quake.

He said: “Although many Californians can recount experiencing an earthquake, most have never personally experienced a strong one.

“For major events, with magnitudes of seven or greater, California is actually in an earthquake drought.”

The Pacific Ring of Fire is the most geologically active region in the world.

More than 90 per cent of earthquakes occur here, as well as 22 or the 25 biggest volcanic eruptions in history.

Read More:The ‘Big One’ Is Close: HUGE Pressure Builds Along The ‘Ring Of Fire’