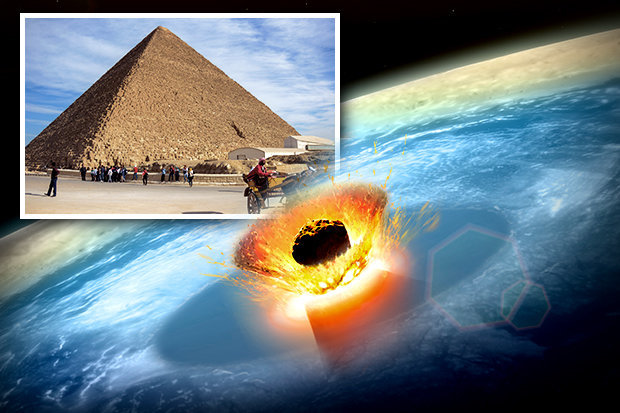 At that speed, it is around 15 times faster than the 1,354mph the retired Concorde travelled at.

At that size, it is bigger than the Great Pyramid of Giza in Egypt which measures 139m.

It is listed on NASA’s Earth Close Approaches page, despite whizzing by at a distance of 3million miles away.

But in space terms, it is considered close enough that it will pay attention to it.

At 160m, it is considered a “Potentially Hazardous Asteroid” because it is above 140m.

It comes after a bus-sized asteroid zoomed past Earth earlier this month in the closest approach of the year.

WARNING: A CGI image of an asteroid crashing into Earth

But despite that, NASA still missed the 15-metre space rock that flew past at 20,636 miles.

The space agency didn’t find the rock until the day after.

Amateur astronomer and high school physics teacher Tony Dunn explained on Twitter the asteroid was “undiscoverable prior to closest approach because it came from the direction of the Sun”.

Read More:10 Near-Earth Asteroids Fly By In October: What Is Perturbing These Objects?