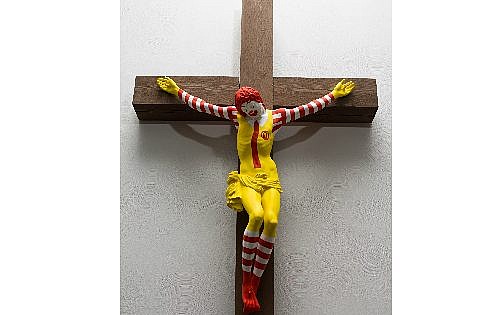 Hundreds of Arab Christian demonstrators clashed with police in Haifa on Friday over a museum’s display of a sculpture depicting Ronald McDonald, the mascot of the fast-food giant, on a cross, amid calls to remove the artwork that some have called offensive.

Police said a few hundred protesters tried to force their way into the Haifa Museum of Art during the demonstration and that three officers were injured by rocks hurled at them.

An investigation was opened to identify the rock-throwers, and a 32-year-old resident of the city was arrested on suspicion of attacking officers.

Video from the demonstration showed scuffles as police used tear gas and stun grenades to clear the protesters.

One of the protesters complained that the government was slow to react to their concerns because they were from the Christian minority. “If they put up [a sculpture of] Hitler with a Torah scroll they would immediately respond,” he told the Walla news site.

Ahead of the protest, police deployed officers from its Special Patrol Unit to guard the museum after a molotov cocktail was thrown at the museum on Thursday.

The “McJesus,” which was sculpted by Finnish artist Jani Leinonen and depicts a crucified Ronald McDonald, went on display in August as part of the Haifa museum’s “Sacred Goods” exhibit.

The show also features a number of other pieces depicting Jesus, including one of him as a “Ken” doll, as well as imagery from other religions.

“Disrespect of religious symbols sacred to many worshipers in the world as an act of artistic protest is illegitimate and cannot serve as art at a cultural institution supported by state funds,” she wrote.

In response to Friday’s protest, the Haifa Museum said Tal agreed during a meeting with church leaders and officials from the Haifa Municipality to put up a sign at the entrance to the exhibit explaining it contains potentially offensive content.

The museum also condemned the throwing of the molotov cocktail and said any objection to the piece must not be expressed violently.