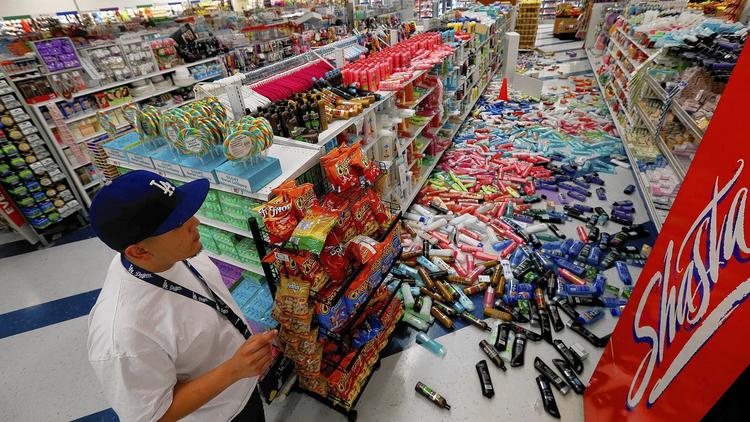 No, it’s not your imagination: The Los Angeles area is feeling more earthquakes this year.

After a relatively quiet period of seismic activity in the Los Angeles area, the last five months have been marked by five earthquakes larger than 4.0. That hasn’t occurred since 1994, the year of the destructive Northridge earthquake that produced 53 such temblors.

Over the next two decades, there were some years that passed without a single quake 4.0 or greater.

Earthquake experts said 2014 is clearly a year of increased seismic activity, but they said it’s hard to know whether the recent string of quakes suggests that a larger one is on the way.

“Probably this will be it, and there won’t be any more 4s. But the chance we will have a bigger earthquake this year is more than if we hadn’t had this cluster,” U.S. Geological Survey seismologist Lucy Jones said. “Every earthquake makes another earthquake more likely.”

Quakes in the magnitude 4 range are large enough to be felt over wide areas but generally too small to cause much damage. The largest this year was a magnitude 5.1 in La Habra, which caused several million dollars in damage. Others hit Fontana and Rowland Heights.

But scientists are particularly intrigued by the other two quakes, which were centered along the 405 Freeway under the Santa Monica Mountains.

In addition to a 4.4 quake March 17 in Encino and Sunday’s 4.2 temblor a few miles away in Brentwood, 15 earthquakes between magnitude 1.0 and 2.5 hit between January and March in the Santa Monica Mountains near Wilacre Park.

The quakes show that seismic activity underneath the Santa Monica Mountains is increasing, Caltech seismologist Egill Hauksson said. The mountains were formed by earthquake activity over millions of years.

The quakes occurred in an area of relatively steep terrain and within less than three miles of each other, suggesting that they were related, Hauksson said.

“We don’t know if it has ended or if it will keep going,” Hauksson said.

After the March 17 quake, the leading theory from seismologists was that it could have been an aftershock of the 1994 Northridge earthquake, which killed 57 people. But on Monday, Hauksson said it’s possible both quakes could be part of a new seismic sequence.

Experts have also been investigating possible causes for the La Habra quake.

The epicenter was in a region that has seen significant oil extraction over the decades. So Hauksson studied whether oil pumping could have triggered the 5.1 quake as well as the 4.1 aftershock in Rowland Heights.

A review of data found that it was unlikely, Hauksson said. There was a doubling of petroleum extraction from Santa Fe Springs in the year before the La Habra earthquake, but that was roughly seven miles from the epicenter — too far for a connection to be made.

There was also “no trail of seismicity from the oil field to the 5.1 earthquake,” Hauksson said.

The U.S. Geological Survey has been studying the increase in earthquakes larger than 3.0 in the central and eastern United States in recent years. There have been more than 100 a year on average in the last four years, up from 20 a year between 1970 to 2000.

The USGS studies suggest that the increased number of earthquakes coincides with the injection of wastewater deep underground, a process that occurs after an oil extraction technique called hydraulic fracturing, or “fracking.”

According to the agency, a magnitude 5.6 earthquake in 2011 appeared to be related to wastewater disposal in rural central Oklahoma, damaging more than a dozen homes and leading to some injuries.

Three Los Angeles City Council members want city, state and federal groups to determine whether fracking and other forms of oil and gas “well stimulation” played any role in the March 17 earthquake.

An oil and gas industry association called the effort “appallingly irresponsible,” and said it wasn’t surprising that “the handful of extremist environmental organizations … would attempt to make an entirely unfounded connection between hydraulic fracturing and the earthquake.”

Hauksson said study of whether the injection of wastewater underground after fracking contributes to earthquakes in California is difficult because there’s no publicly available, comprehensive database about what volumes of fluid oil companies are injecting into the ground and where it is occurring.

Jones said the number of sizable quakes over a short period is notable, but also important to keep in perspective.

“That’s definitely way more than the long-term average,” Jones said. “Is that something to worry about? If we knew that, we’d be predicting earthquakes.”