A continuous tremor has been shaking from Vancouver Island south toward Olympia.  A lead seismologist at the University of Washington told KIRO 7 they are not alarmed, but that the tremor is likely tied to the biggest quake in the Puget Sound region.

Hundreds of tremors registered across the Pacific Northwest within a 25-hour span starting Monday.

The Pacific Northwest Seismic Network plotted 427 tremors on a map. 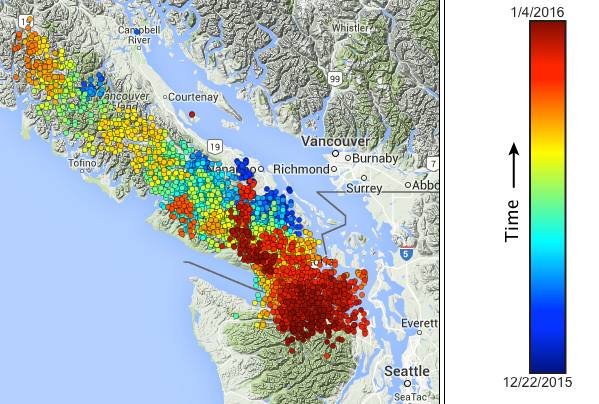 “What’s happening is there’s an episode where the deep plate boundary is kind of rumbling,” said Dr. John Vidale, director of the Pacific Northwest Seismic Network.

The tremor can last three weeks and happens about once a year.  It’s been shaking 30 miles under Puget Sound since Dec. 22.  Unlike an earthquake map, the dots on the tremor map show readings of the same tremor.  You can see the map here: http://pnsn.org/tremor

Dr. Vidale believes the tremor is related to the 4.3 earthquake that shook under Victoria, British Columbia on Dec. 30.  That quake was the largest in the Puget Sound region since the Nisqually quake of 2001.

“No, as far as we can tell it’s a regular tremor episode,” said Dr. Vidale.  “It’s a little bigger than usual.”

The tremor will keep moving south until it runs out of energy.   It could end today or in two weeks. Dr. Vidale doesn’t consider this alarming even though it was tied to the Victoria quake last week.

“We hope eventually we can see patterns here that tell us something about when earthquakes are coming,” said Dr. Vidale.  “But right now there’s nothing in this that’s diagnostic of what’s coming in the future.”

An online mapping tool lets Seattle residents search zoom in on the natural hazards that threaten their homes or workplaces.

Users can find out whether their office or apartment building sits on soil that will turn to goo in a major earthquake. Other overlays show areas vulnerable to flooding, landslides and quake-triggered tsunamis.