An alarming video shows a ‘smart summoned’ driverless Tesla Model 3 car tentatively trying to find its owner — while going down the wrong side of the road.

Stopping and starting — in the dead middle of the road at one point — the vehicle’s ham-fisted driving is seen to attract the concerned attention of passersby.

This latest worrying exhibition of driverless tech was filmed in a shopping centre parking lot in Richmond, British Columbia.

The Smart Summon feature was intended to allows the cars to self-drive short distances to their owners when called for using a smartphone app. 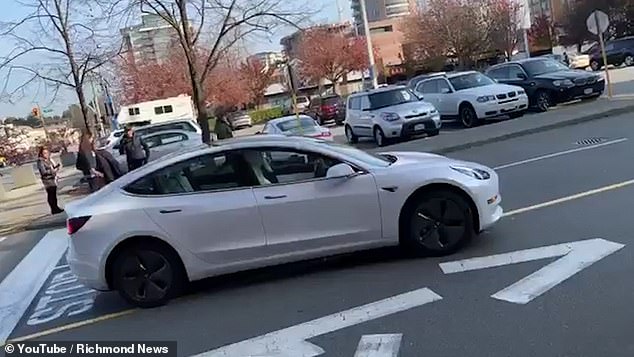 The Smart Summon feature was rolled out to supported Tesla cars as part of the company’s software version 10.0, released on September 26, 2019.

The feature, as described by the firm, lets cars ‘navigate a parking lot and come to them or their destination of choice, as long as their car is within their line of sight.’

‘It’s the perfect feature to use if you have an overflowing shopping cart, are dealing with a fussy child, or simply don’t want to walk to your car through the rain.’

According to a tweet by Elon Musk, Tesla drivers summoned their vehicles over 550,000 times following the initial release of the feature.

Alongside this, the firm has touted Smart Summon’s reception among customers that had early access to the feature.

These users, Tesla said, ‘adds both convenience to their trips and provides them with a unique moment of delight when their car picks them up to begin their journey.’

Nevertheless, reports of the feature instead cultivating unique moments of panic seem to abound.

Twitter uses have posted pictures and video of Tesla cars that have apparently damaged themselves while self-driving, had near misses with other vehicles in parking lots and shocked passers-by. 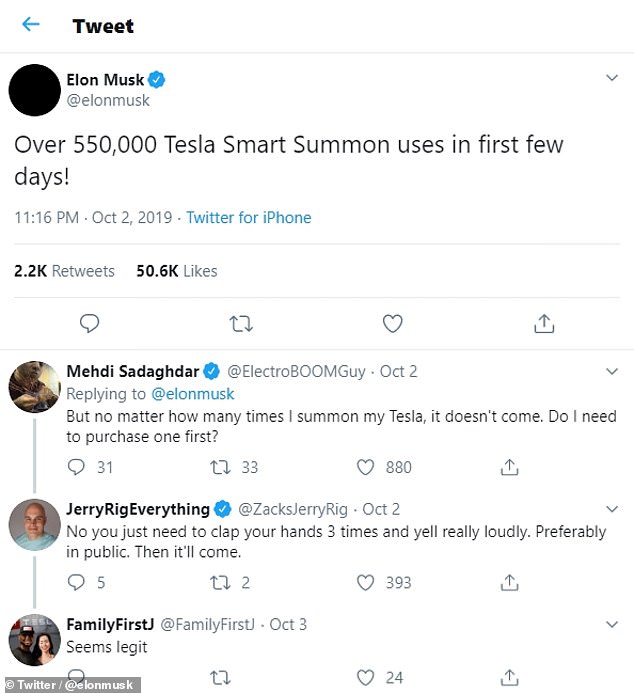 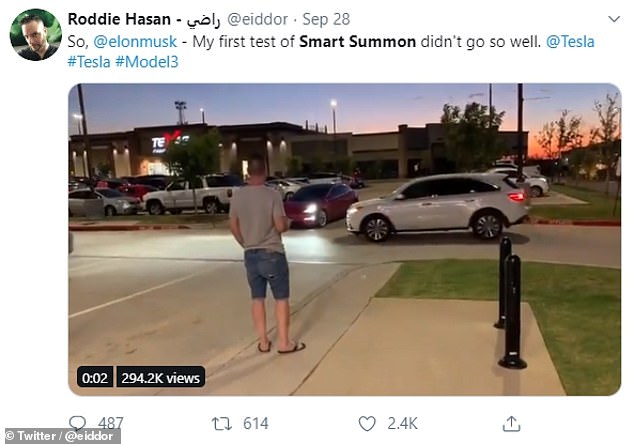 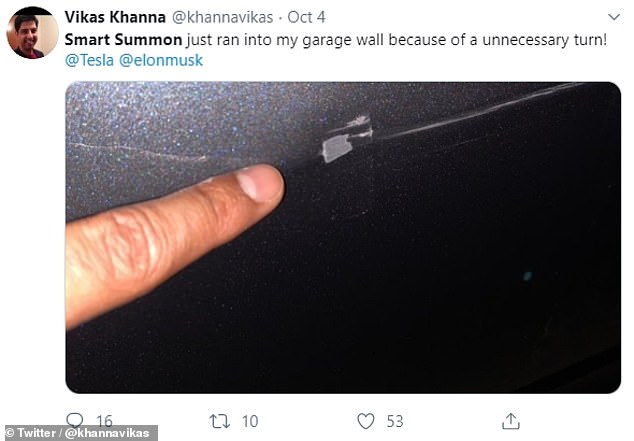 Tesla seems to be well-aware, however, that the feature is — at least at present — not entirely reliable.

‘Those using Smart Summon must remain responsible for the car and monitor it and its surroundings at all times,’ they wrote in a press release in September.

The MailOnline has reached out to Tesla for comment. 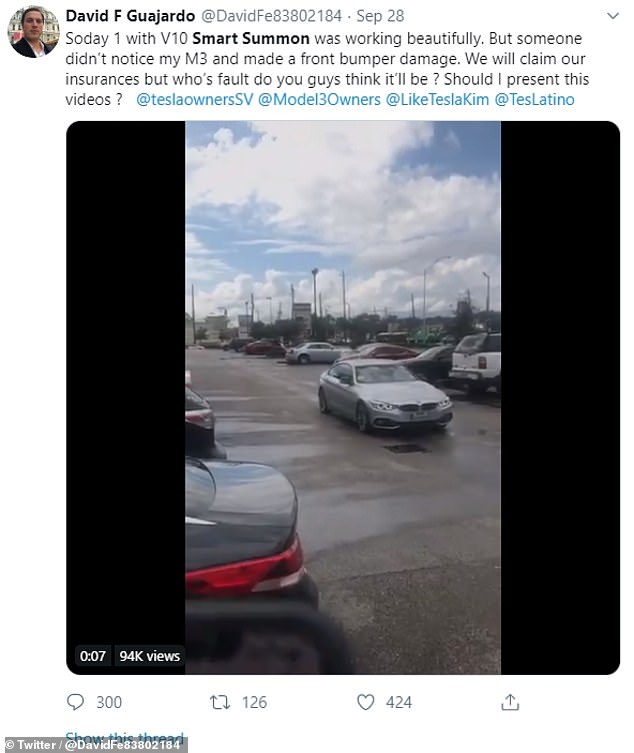 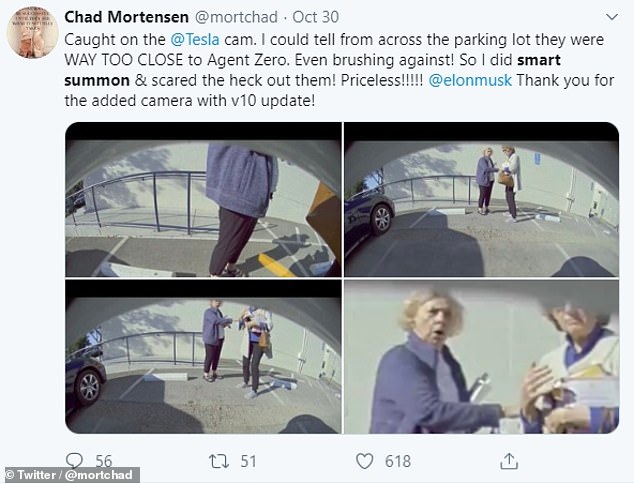 HOW DO SELF-DRIVING CARS ‘SEE’?

Self-driving cars often use a combination of normal two-dimensional cameras and depth-sensing ‘LiDAR’ units to recognise the world around them.

However, others make use of visible light cameras that capture imagery of the roads and streets.

They are trained with a wealth of information and vast databases of hundreds of thousands of clips which are processed using artificial intelligence to accurately identify people, signs and hazards.

In LiDAR (light detection and ranging) scanning – which is used by Waymo – one or more lasers send out short pulses, which bounce back when they hit an obstacle.

These sensors constantly scan the surrounding areas looking for information, acting as the ‘eyes’ of the car.

While the units supply depth information, their low resolution makes it hard to detect small, faraway objects without help from a normal camera linked to it in real time.

In November last year Apple revealed details of its driverless car system that uses lasers to detect pedestrians and cyclists from a distance.

The Apple researchers said they were able to get ‘highly encouraging results’ in spotting pedestrians and cyclists with just LiDAR data.

They also wrote they were able to beat other approaches for detecting three-dimensional objects that use only LiDAR.

Other self-driving cars generally rely on a combination of cameras, sensors and lasers.

An example is Volvo’s self driving cars that rely on around 28 cameras, sensors and lasers.

A network of computers process information, which together with GPS, generates a real-time map of moving and stationary objects in the environment.

Twelve ultrasonic sensors around the car are used to identify objects close to the vehicle and support autonomous drive at low speeds.

A wave radar and camera placed on the windscreen reads traffic signs and the road’s curvature and can detect objects on the road such as other road users.

Two long-range radars on the bumper are used to detect fast-moving vehicles approaching from far behind, which is useful on motorways.

Four cameras – two on the wing mirrors, one on the grille and one on the rear bumper – monitor objects in close proximity to the vehicle and lane markings.

Read More:Google Self-Driving Cars Getting Into Accidents, Incidents Being Suppressed