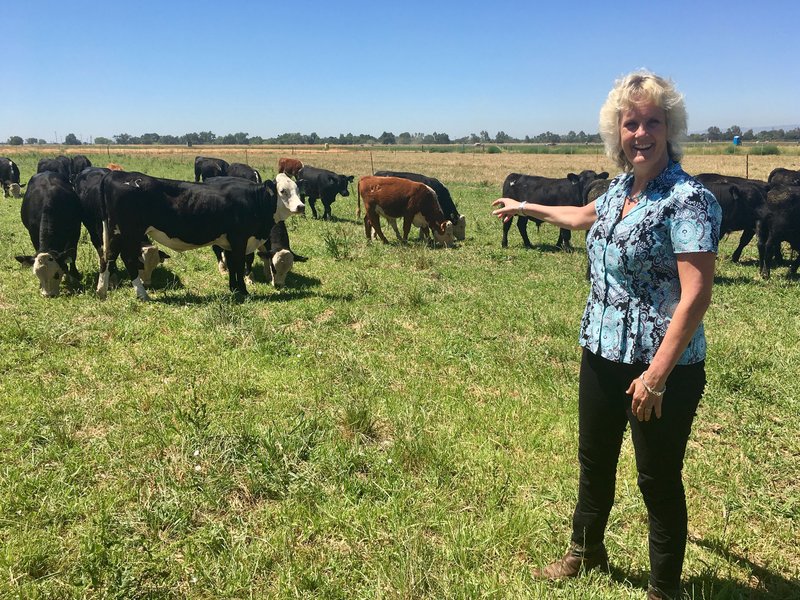 A company wants to alter farm animals by adding and subtracting genetic traits in a lab. It sounds like science fiction, but Recombinetics sees opportunity for its technology in the livestock industry.

But first, it needs to convince regulators that gene-edited animals are no different than conventionally bred ones. To make the technology appealing and to ease any fears that it may be creating Franken-animals, Recombinetics isn’t starting with productivity. Instead, it’s introducing gene-edited traits as a way to ease animal suffering.

For instance, animal welfare advocates have long criticized the way farmers use caustic paste or hot irons to dehorn dairy cows so the animals don’t harm each other. Recombinetics snips out the gene for growing horns so the procedure is unnecessary.

Last year, a bull gene-edited by Recombinetics to have the dominant hornless trait sired several offspring. All were born hornless as expected, and are being raised at the University of California, Davis. Once the female offspring starts lactating, its milk will be tested for any abnormalities.

The altering of food and animals by adding and subtracting genetic traits in a lab sounds like science fiction. Different than GMO’s, gene-edited food could be the wave of the future. (Nov. 15)

When male piglets go through puberty, their meat can take on an unpleasant odor, something known as “boar taint.” To combat it, farmers castrate pigs, a procedure animal welfare advocates say is commonly performed without painkillers. Editing genes so that pigs never go through puberty would make castration unnecessary.

Also in development are dairy cows that could withstand higher temperatures, so the animals don’t suffer in hotter climates.

Recombinetics and others say gene-editing techniques do what traditional breeding has always done, except much faster and with the precision of “molecular scissors.” They are waiting for clarity from government officials , but say meat and milk from gene-edited animals shouldn’t be subject to special regulations.

Most U.S. dairy cows already are bred through artificial insemination from “semen straws,” which are priced for a bull’s pedigree and traits developed through years of traditional breeding. Gene-edited traits would just be higher-priced extras, Recombinetics says. For example, the hornless trait could add $3 to $5 to the price of a semen straw that could cost around $15.

Once gene-editing is accepted by the public, farmers will be more interested in traits that step up productivity, Lee predicted. As an example, she cited pigs edited to have bigger litters.

CHICKENS AS BIG AS ELEPHANT?

Before food from gene-edited animals can land on dinner tables, however, Recombinetics has to overcome any public unease about the technology.

Beyond worries about “playing God,” it may be an uncomfortable reminder of how modern food production already treats animals, said Paul Thompson, a professor of agriculture at Michigan State University.

“There’s an ethical question that’s been debated for at least the last 20 years, of whether you need to change the animal or change the system,” Thompson said.

Support for gene editing will also likely depend on how the technology is used: whether it’s for animal welfare, productivity or disease resistance. In August, a Pew study found 43 percent of Americans supported genetically engineered animals for more nutritious meat.

The array of possibilities is why the Humane Society of the United States supports gene-editing to end pig castrations and cow dehorning but doesn’t give the technology its blanket approval.

“If you edit for your chicken to be the size of an elephant, that’s not good,” said Josh Balk, the group’s vice president of farm animal protection.

The image seems preposterous, but it may not be far off from what the words “gene-edited animals” conjure for many. In the science-fiction movie “Rampage” earlier this year, gene-editing is used to create monsters, including a giant wolf that shoots porcupine spikes from its tail.

Some may also question the need to risk using the technology, if it really just speeds up what could be achieved with conventional breeding.

Advances in traditional breeding have already stepped up the productivity of cows, chickens and pigs. Today, milk producers can shop for characteristics developed through conventional breeding, like body frames and how efficiently animals convert feed into meat. Semex, a Canadian seller of bull semen, offers already offers a ”Robot Ready ” option for cows “built for automation,” with teat lengths and temperaments bred for milking machines.

The company is working with Recombinetics to develop the gene-edited hornless trait.

Notably, hornless dairy cows also already exist. But Recombinetics says there are so few that breeding them would compromise the valuable traits that have been carefully bred into modern dairy cows.

But John Burket, who breeds hornless dairy cows in Pennsylvania, thinks the hornless trait could spread quickly if it was prioritized.

Burket isn’t opposed to gene-editing, but he said he’s waiting to see if the technology delivers.

For now, a more practical challenge for Recombinetics will be coming up with gene-edited traits farmers are willing to pay for. Semex says it will take at least two years of testing before it can start selling the hornless trait for dairy cows.

Conventional breeding comes with a lot more chance, but advances over the years have nevertheless made dairy farms increasingly productive. Paradoxically, that has contributed to a glut of milk, driving down prices and pressuring farmers.

Recombinetics says improving productivity isn’t just about producing more milk or meat but targeting inefficiencies like dehorning and pig castrations. Still, Lorraine Lewandrowski, a dairy farmer in upstate New York, is reminded of the skepticism she felt with bovine growth hormone in the 1990s.

“Do we want another technology that will put even more milk on the market?” she said.

Lewandrowski is also wary of anything that might give the dairy industry a bad image. But she noted the gene-edited hornless trait could save the time spent on dehorning.

Jonathan Lamb, an owner of Oakfield Dairy in western New York, said he wouldn’t pay much extra for the hornless trait; he’s watching costs because of low milk prices. But he thinks gene-editing could offer other improvements.

“I see that as a first step to other possibilities,” he said.

Read More:Nothing Shall Be Witholden From Them: Gene-Editing Tech Will Eventually Be Used To Create Chimeras, Say Scientists

Read More:Biotech Star-Ups Ignite The New Race To The Top Of The ‘Frankenfood’ Market

Read More:No Danger Here: As Gene-Editing Start-Ups Grow, So Does The Threat Of Permanent Gene Mutation

Read More:Nothing Shall Be Witholden From Them: Dinosaur Legs Grown On Genetically Modified Chicken In World’s First

Read More:Scientists Plan On Genetically Modifying Animals For Military Use