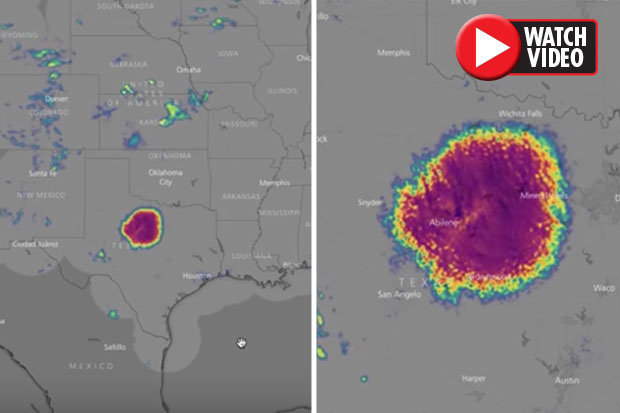 The strange phenomenon over the US state was spotted on a number of forecasting apps by an eagle-eyed user.

It shows an unusual burst of activity and the man who filmed it speculated it had detected “a strange kind of energy”.

He revealed how the data was later removed from the site, but he luckily screen-recorded the findings.

The article is believed to have covered an area of around 175 miles.

BIZARRE: Could it be military testing or simply a glitch?

“hat is a HAARP ring from the radar station”

The clip was uploaded to YouTube channel MrMBB333 today, where it has racked up more than 50,000 hits.

And a number of viewers believe it is proof of a secret project run by the US government.

Another added: “The way it appears it looks artificial, like someone testing something huge.”

And a third claimed: “That is a HAARP ring from the radar station in pulse mode – weather modification.”

The High-Frequency Active Auroral Research Programme was initiated as a research project between the US Air Force, Navy, University of Alaska Fairbanks and the Defence Advance Research Agency.

Many conspiracists believe the US government is already using the HAARP programme to control weather occurrences.

Over the years, HAARP has been blamed for generating natural catastrophes such as thunderstorms and power loss as well as strange cloud formations.

But it was actually designed and built by BAE Advance Technologies to help analyse the ionosphere and investigate the potential for developing enhanced technologies.

Earlier this month, similar concerns were raised as an unexplainable object was spotted on a weather report.

Watch More:What Is This Strange Magnetic Anomaly In The Skies?