The cream of liberal society, including President Joe Biden himself, have been mocked over old tweets backing Jussie Smollett in the wake of his conviction.

President Biden, Vice President Kamala Harris and a host of other liberal celebrities face questions over their tweets, backing Smollett on the same day as the alleged January 2019 attack, which he was convicted of faking on Thursday.

Hours after the staged beating Biden, then a presidential hopeful, tweeted: ‘What happened today to @jussiesmollett must never be tolerated in this country.

‘We must stand up and demand that we no longer give this hate safe harbor; that homophobia and racism have no place on our streets or in our hearts. We are with you, Jussie.’

He captioned his post: ‘#JusticeForJussie we got him guys we got the guy that did this heinous act. #juicy’

Over on Twitter, Don Jr replied to another old tweet from civil rights campaigner the Reverend Al Sharpton saying ‘the guilty must face the maximum.’

The former president’s son added: ‘I’m with you Al, I think all of America is with you on this one. The guilty must face the maximum.’

Smollett could face 20 years in jail. While he’s widely expected to get a custodial sentence, his

Trump Jr later added his own thoughts to the matter, tweeting: ‘I’m just happy to live in a country where people will go to jail for attacking a gay black man… There’s absolutely no place for that s**t in America, or anywhere else, and I am happy the perpetrator was brought to justice.’

AOC tweeted: ‘There is no such thing as “racially charged.” This attack was not “possibly” homophobic. It was a racist and homophobic attack.

‘If you don’t like what is happening to our country, then work to change it. It is no one’s job to water down or sugar-coat the rise of hate crimes.’

And Tlaib said: ‘When one of the most famous black and gay men in America is not safe, the message is clearer than it has ever been.” The dangerous lies spewing from the right wing is killing & hurting our people. Thinking of you @jussiesmollett, and my LGBTQ neighbors.’

Other top Democrats who railed against the now debunked beating include House Speaker Nancy Pelosi, and Vermont Senator Bernie Sanders.

Pelosi soapboxed: ‘The racist, homophobic attack on @JussieSmollett is an affront to our humanity. No one should be attacked for who they are or whom they love.

‘I pray that Jussie has a speedy recovery & that justice is served. May we all commit to ending this hate once & for all.’

And Bernie railed: ‘The racist and homophobic attack on Jussie Smollett is a horrific instance of the surging hostility toward minorities around the country. We must come together to eradicate all forms of bigotry and violence.’

Smollett, 39, told Chicago police he had been accosted on a darkened street by two masked strangers. According to his account of the attack, the assailants threw a noose around his neck and poured chemicals on him while yelling racist and homophobic slurs and expressing support for then-President Donald Trump.

A host of other political bigwigs and A-list stars’ messages backing Jussie have come back under the spotlight after his conviction for lying.

Sen. Cory Booker, rushing to his defense, echoed Harris’ claims that the attack was equivalent to a lynching and cited it as reason for Congress to pass an anti-lynching bill.

‘The vicious attack on actor Jussie Smollett was an attempted modern-day lynching. I’m glad he’s safe,’ Booker tweeted in January 2019. ‘To those in Congress who don’t feel the urgency to pass our Anti-Lynching bill designating lynching as a federal hate crime– I urge you to pay attention.’

Mayor of Chicago Lori Lighfoot chose to criticize the investigation led by officials over the incident, tweeting that she ‘will make sure that, regardless of the victim’s stature, hate crime incidents and complaints are fully investigated.’

Despite what prosecutors said was ‘overwhelming evidence’ that the actor staged the attack and then lied to police about it, Smollett maintained his innocence, denying that he faked the attack.

Smollett made numerous television appearances after the alleged attack, claiming he may ‘never heal’ if he didn’t get justice. Meanwhile, it became painstakingly clear that he staged his own assault, not only damaging the validity of future victim statements, but also wasting police resources and time.

The former ‘Empire’ actor, who is black and openly gay, was found guilty of five felony counts of disorderly conduct on Thursday over accusations that he made false reports to the police.

Dozens of celebrities, including Reese Witherspoon, Zendaya and Ariana Grande among other celebrities and politicians, some now part of the Biden Administration, backed Jussie Smollet and asked for change in the way hate crimes are currently investigated

In the weeks to follow his alleged attack – as Smollett’s tale began to unravel – the left faced scrutiny, yet several celebrities continued to stand by him.

‘He is adamant that he’s telling the truth. Also, everyone that I know who knows him says that he is not the kind of person who would make up such a horrible and awful thing,’ comedian Tyler Perry wrote in Facebook post at the time, though he admitted the ‘evidence seems to state otherwise.’

‘The Jussie I know could never even conceive of something so unconscious and ugly. His innocence or judgment is not for any of us to decide,’ actor Terrence Howard, who worked with Smollett on Empire said at the time.

‘Stay in your lane and my lane is empathy and love and compassion for someone I’ve called my son for five years. It’s God’s job to judge and it’s ours to love and hope, especially for those that we claim to have loved.’

His former co-star Taraji P. Henson added: ‘I know him and I know his track record. I’m not going to jump on clickbait just because someone says something derogatory about a person I know and love. I’m not easily swayed like that.

‘Those little clickbait [reports] weren’t enough to deter me from his immaculate track record. I know the type of activism this young man does in his community, I know that he’s a giver – he’s not an attention-seeker,’ the actress continued.

However, others slammed the actor for his lies.

Harris retracted her statement original statement saying: ‘Like most of you, I’ve seen the reports about Jussie Smollett, and I’m sad, frustrated, and disappointed.’

The then-senator, who has a long history of believing accusations that support her political agenda – as demonstrated by her instant belief that Christine Blasey Ford’s allegations of sexual assault against Brett Kavanaugh were true, a claim she later called a ‘sham’ – said his false accusations were damaging to America’s progress.

‘When anyone makes false claims to the police, it not only diverts resources away from serious investigations but makes it more difficult for other victims of crime to come forward.’

Despite expressing her frustrations, Harris pushed on, claiming that hate crimes were rising in America, citing an FBI figure of a 17 percent increase.

‘Part of the tragedy of this situation is that it distracts from that truth and has been seized by some who would like to dismiss and downplay the very real problems we must address,’ she wrote.

‘We should not allow that. I will always condemn racism and homophobia. We must always confront hate directly and we must always seek justice. That is what I will keep fighting for.’

‘I stand by what I say always. I felt for him when the attack happened and the current reports have made me feel like I was being played. Straight up,’ echoed Straight Outta Compton actor O’Shea Jackson Jr.

Smollett, 39, (seen in this court sketch from his Dec. 2021 trial) told Chicago police he had been accosted on a darkened street by two masked strangers. According to his account of the attack, the assailants threw a noose around his neck and poured chemicals on him while yelling racist and homophobic slurs and expressing support for then-President Donald Trump

Similarly to Harris, as information about the attacked unfolded and it became obvious Smollett had lied, Booker refrained from passing judgement on the actor.

‘The information is still coming out, and I’m going to withhold until all the information comes out from on-the-record sources,’ he told reporters in February 2019.

CNN host Don Lemon, who had also came to the star’s defense, allegedly alerted his longtime friend shortly after the hoax attack that Chicago police didn’t believe his tale, Smollett testified in court on Monday.

In the days after the alleged attack, Lemon told his viewers he was in constant communication with Smollett because the story was ‘personal’ to him since the pair were friends.

He claimed the actor was ‘innocent until proven guilty’ and will have ‘squandered the good will of a whole lot of people’ if he was lying.

Lemon has since remained silent about the allegation that he tipped off Smollett.

Meanwhile, unlike most, comedian Dave Chappelle expressed his outrage with the left’s silence on Smollett’s lies, noting that not discrediting the actor’s claims only made the situation worse. 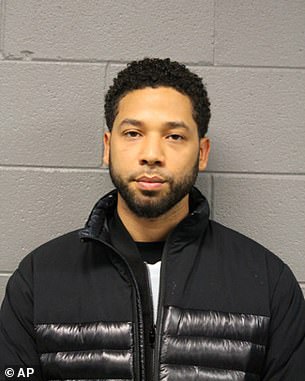 ‘What they didn’t understand is that we were supporting him with our silence,’ he stated in his 2019 Netflix special Sticks & Stones.

‘Because we understood that [he] was clearly lying. None of these details added up at all…If you a racist and homophobic you don’t even know who [he] is! You don’t watch Empire!’

Similarly, civil rights advocates have called the lies a hinderance to their efforts.

‘This casts a shadow of whether [victims are] telling the truth, and he did this all in the name of self-promotion,’ the-then Chicago Mayor Rahm Emanuel Emanuel told reporters at a news conference in 2019.

‘He used the laws of the hate crime legislation that all of us collectively over years have put on the books to stand up to be the values that embody what we believe in. This is a whitewash of justice.’