The current supply chain crisis is one unseen since World War II when ‘there were submarines sinking commercial traders,’ an expert says, and it’s bringing disaster for shoppers as items are being resold for more than double their cost and shipping delays mean more barren shelves.

Holiday shopping is expected to be especially fraught this year, as buyers contend with aggressive resellers and inflated prices – some jacking up toy prices by 400%.

Basic Fun chief executive Jay Foreman – who has been working in the toy industry for more than 30 years – said the current situation is unlike anything he’s ever seen.

‘I would predict that there’s never been anything like this disruption in the global trade supply chain since World War Two,’ he told DailyMail.com. ‘And you know World War Two, with a global supply chain was upset because there were submarines sinking commercial traders. We had a war going on.’

The Biden administration has come under fire for its ‘too little, too late’ response to the backlog after it announced West Coast shipping ports would be running around the clock to ease bottlenecks in the system.

Toy flippers are already charging hefty premiums for sold-out products and computer chip shortages could leave some sought-after items back-ordered for several months, meaning kids who’ve requested them for Christmas could be left sorely disappointed on December 25 – just over two months away.

American Girl’s sold-out blonde winter princess doll, which retailed for $250, is now going for up to $999 on platforms such as Mercari and eBay.

The cat-themed Gabby’s Dollhouse, which is all the rage for this year’s preschoolers, has nearly quadrupled on some sites from its original $55 price tag.

Factory closures in China, labor shortages in the U.S., a freight container shortage, and a port backup are among the reasons for retail chaos.

The troubles are compounded by a lack of truck drivers, warehouses unequipped to receive mass amounts of product, the rising cost of fuel and more, Foreman said.

American Girl’s sold-out blonde winter princess doll (pictured left), which retailed for $250, is now going for up to $999 on platforms such as Mercari and eBay. The cat-themed Gabby’s Dollhouse (picture, right), which is all the rage for this year’s preschoolers, has nearly quadrupled on some sites from its original $55 price tag

An up-and-coming toy called Tiny TV Classics is even getting snapped up faster than it can be produced, he said.

The problem is that the miniature televisions, which play snippets of real shows, require an integrated circuit chip that has a 200-day lead time.

It means that once those novelty items sell out, they’ll be off the shelves for several months, Foreman said.

Production of other computerized toys is also being hampered by the chip shortage, he added.

‘Even the Lite-Brite uses an integrated circuit chip, and that controls the movement of the light.

‘In the Speak and Spell, it stores all the dialogue; that’s all in these integrated circuit chips.’

Amid the frenzy, young shoppers are likely to be most significantly affected by the supply shortage, a recent Morning Consult survey indicated.

About 70 percent of Generation Z and millennial holiday shoppers said an item they wanted was already out of stock in stores and 72 percent said an item was out of stock online; 65% found an item to be backordered or delivery delayed. Responses were gathered from October 1-3.

Another Morning Consult survey published last week indicated that half of Americans have not yet begun their Christmas shopping as of October 11 – which means the supply chain crisis could be exacerbated as more and more shoppers look to make purchases.

About half of shoppers who have started buying gifts experienced supply chain issues, the survey found. 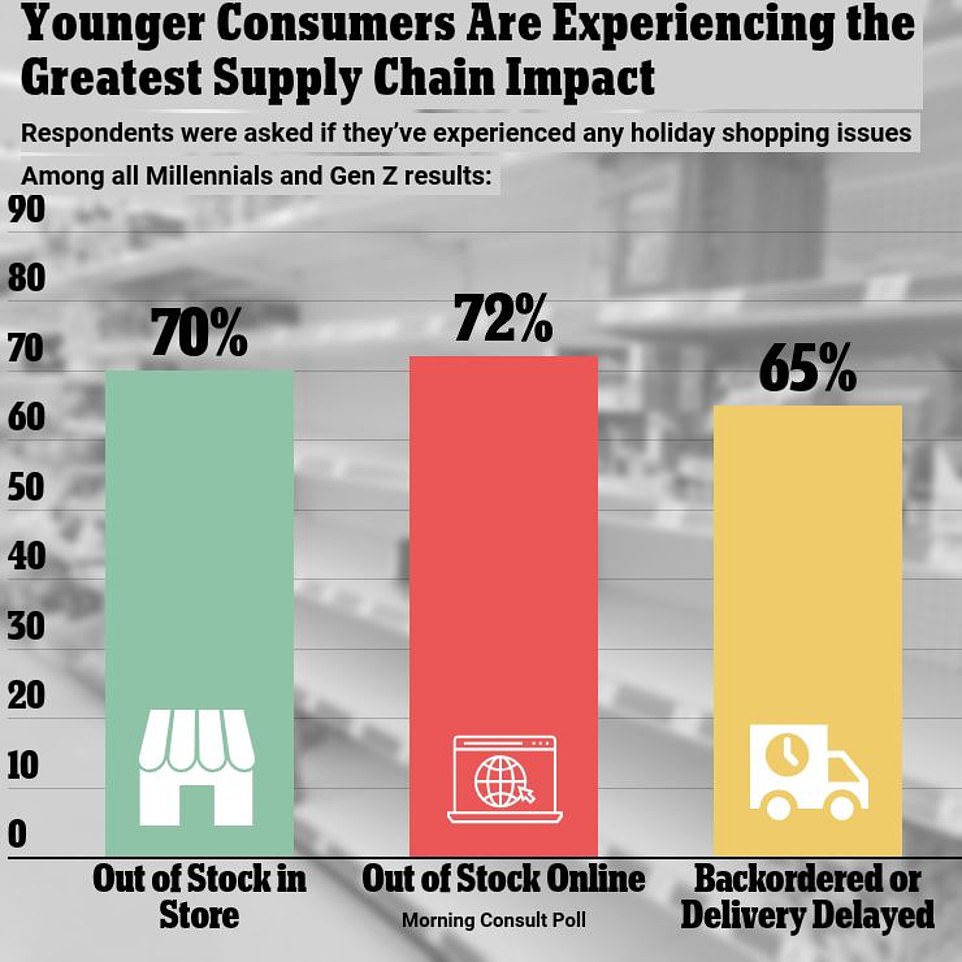 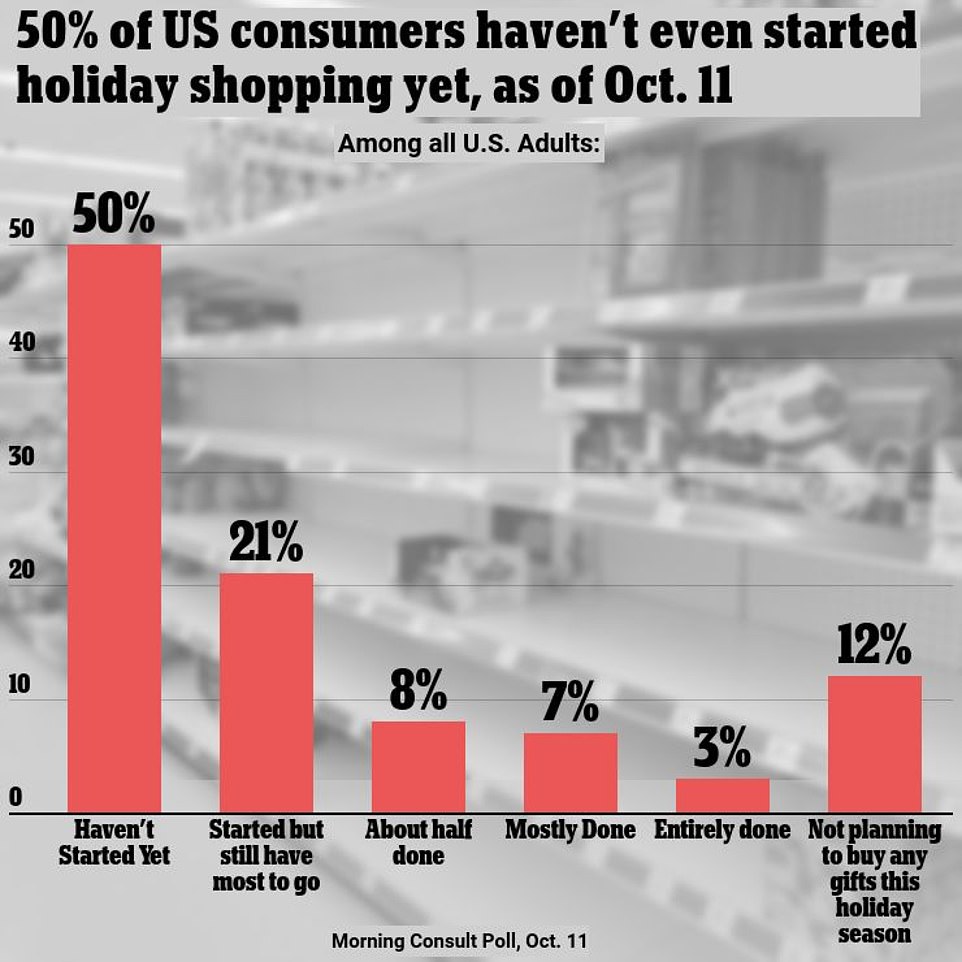 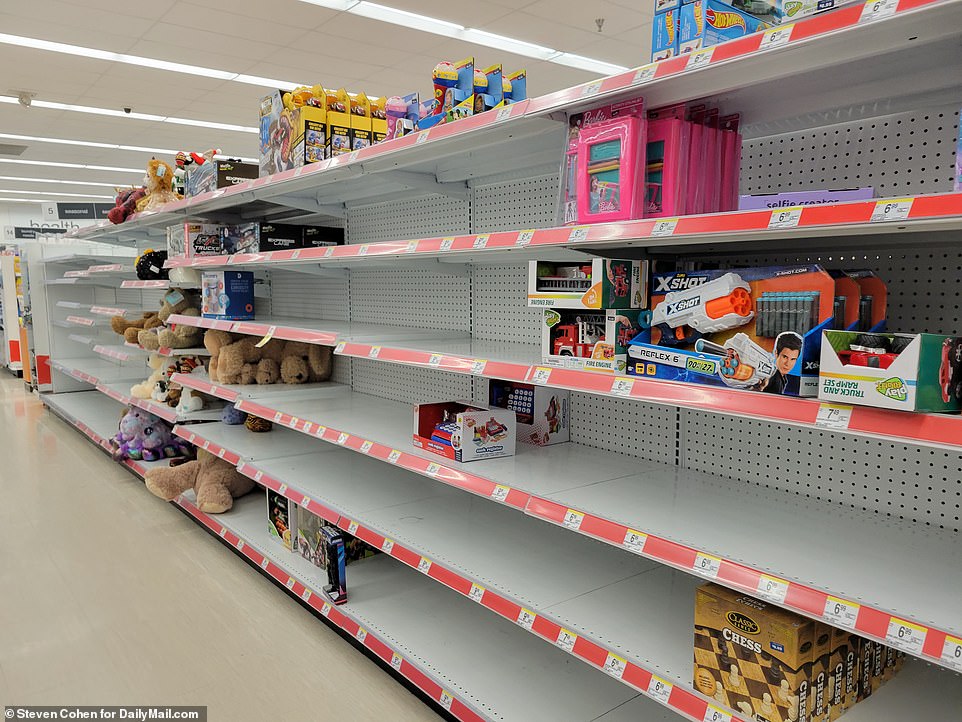 Bare shelves are seen at a Walgreen’s in Minneapolis on Oct 9, 2021 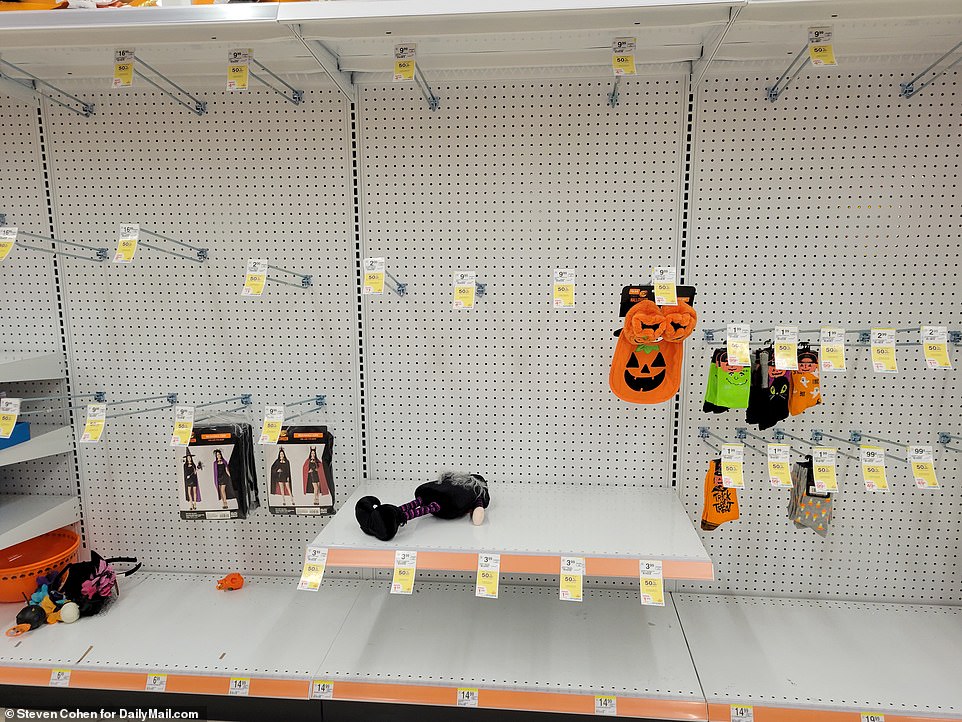 Supply chain bottlenecks are resulting in empty retail displays across the country. Pictured: more bare shelves in Minneapolis on Oct. 9, 2021 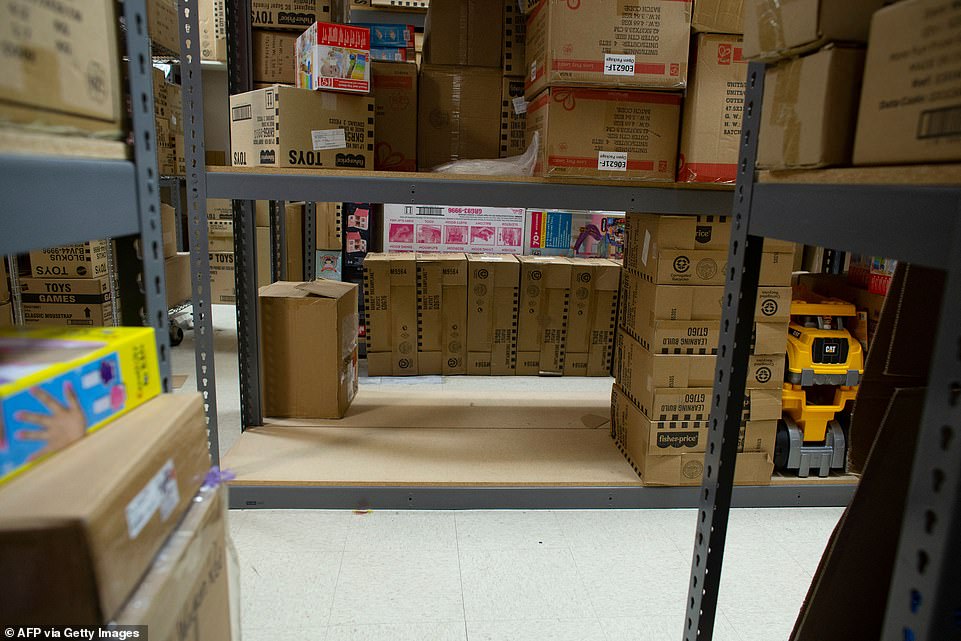 ‘Demand has been off the charts’ across a number of sectors, a consumer analyst said. Empty shelves above are seen at Mary Arnold Toys, New York City’s oldest toy store, on August 21, 2021

It’s not just toys and goods that are becoming harder to find ahead of the holidays.

Stocking the fridge for holiday festivities could also be a challenge, with turkey giant Butterball warning that smaller birds might be harder to find this year.

Overall food prices are skyrocketing in the U.S., where beef prices have jumped 12.2 percent during the past year and the cost of bacon increased 17 percent, according to the U.S. Department of Labor.

Meat, poultry, fish and eggs sold at an eight percent premium this year, with prices up 15.7 percent since August 2019. When you compound that with a profound labor shortage, you’re really setting up the perfect storm for a very difficult holiday season

Katie Denis, vice president of research and industry narrative at the Consumer Brands Association, said the grocery sector is facing supply chain challenges of its own.

‘We’re entering what is going to be one of the busiest times of the year when it comes to shipping,’ she told DailyMail.com.

‘It’s just going to be a volume game, and that’s a lot of what’s been troubling the supply chain for months now.

‘Demand has been off the charts.’

‘When you compound that with a profound labor shortage, you’re really setting up the perfect storm for a very difficult holiday season.’

‘I think overbuying is  what drove a lot of the shelf clearing we saw earlier in the pandemic. That can really go a long way to making sure everyone has what they need and you’re not struggling to find the stuff on your list.’

Right now, thousands of freight containers filled with Christmas decorations, toys and other goods are stranded at the ports of Los Angeles and Long Beach, where cargo ships queue for weeks just to unload.

It takes twice as long as it normally would for a freight order from China to reach its final U.S. destination, Ocean Audit Inc. chief executive Steve Ferreira told Dailymail.com.

About a year ago, retailers paid about $1,100 for a 40-foot crate traveling from Asia to LA.

The price has since skyrocketed to $5,000 per box, with some big box stores paying upward of $9,000 per container to ensure delivery, Ferreira said.

The costs will be absorbed by customers, who’ll be hard pressed to find a good deal on toys this season said Foreman, whose toymaking company produces Tonka, Care Bear and My Little Pony products.

‘You won’t probably find as many deals,’ Foreman said.

‘There certainly will be some deals, but the retailers have to cover the cost of the inflation and the high cost of ocean freight and transportation, which wasn’t calculated into the retail price of the merchandise when the season started.

‘So if they don’t want to raise prices – which many of them don’t want to do – they’re probably less likely to discount as much.’

Exacerbating the issue is that importers previously stuffed their warehouses before former president Donald Trump’s trade tariffs kicked in and have nowhere to store incoming product.

‘It is such a complex issue,’ Ferreira, an ocean freight expert, said. ‘The warehouses are full, but they’re filled with the wrong kind of product.’

Big box retailers – who often have their own storage facilities – are working around port backlogs and warehouse issues by chartering their own intercontinental freight ships, he said.

Both figures are markedly higher than during pre-pandemic times, when just 17 ships were anchored.

The White House has already warned American shoppers that they won’t be able to get key items such as popular kids toys for Christmas because of supply chain backlogs.

Biden reached a deal October 13 with unions and business leaders from Walmart, FedEx, UPS and others to expand operations at the ports in a bid to ease supply chain bottlenecks that are driving up consumer prices and emptying store shelves.

Under the new agreement, the Port of Los Angeles will join the Port of Long Beach in working around the clock to alleviate some of the supply chain bottlenecks plaguing consumers ahead of the holiday season.

But Ferreira said it’ll take more than relieving the ports’ congestion to save Christmas.

‘I talked to a few experts in my camaraderie of friends and we all agree that getting more attention on it is good, but to look at it on a scale of one to 10 – with 10 being the maximum collaborative effort that all parts of the supply chain would contribute to – I think what (Biden’s) done is more like a 2.2 or a 2.5,’ he said.

‘It gets focus on it, which is good, but the timing on it is very suspect because the administration knows that at this stage, everything that needed to have come in for Christmas is already going to be too late.

‘In other words, there’s not much more that can be done to speed up and accelerate getting the stocks reshelved.’