NASA said on Monday that its mission to deflect an asteroid in deep space using a spacecraft is targeting a late November launch.

Known as the Double Asteroid Redirection Test (DART) mission, the U.S. space agency will send the DART spacecraft to a pair of asteroids – the Didymos binary – at 1:20 a.m. EST on November 24 aboard a SpaceX Falcon 9 rocket from Vandenberg Space Force Base in California.

In doing so, it will change the speed of Didymoon a fraction of a percent, but it will be enough so NASA can measure its altered orbit. 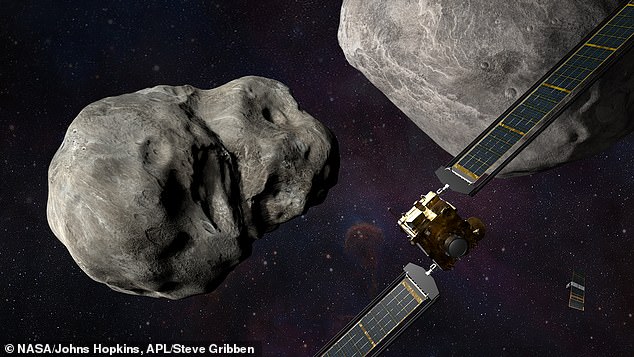 This will provide valuable input into future missions to deflect asteroids.

At roughly 160 meters (524ft) wide, Didymoon orbits a much larger space rock known as Didymos that is approximately 780 meters (2,559ft) across. 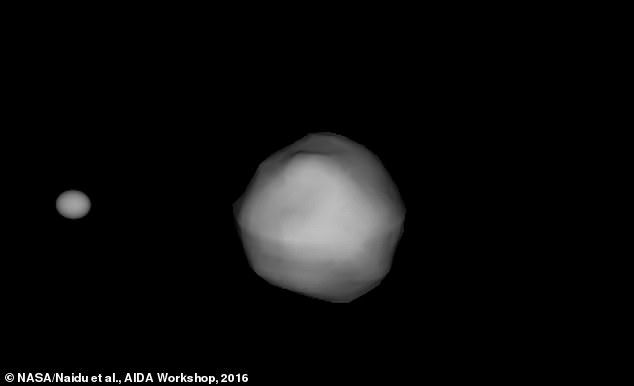 The DART spacecraft will head towards the Didymos binary (pictured) on November 24 aboard a SpaceX Falcon 9 rocket. At roughly 160 meters (524ft) wide, Didymoon orbits the much Didymos, which is approximately 780 meters (2,559ft) across 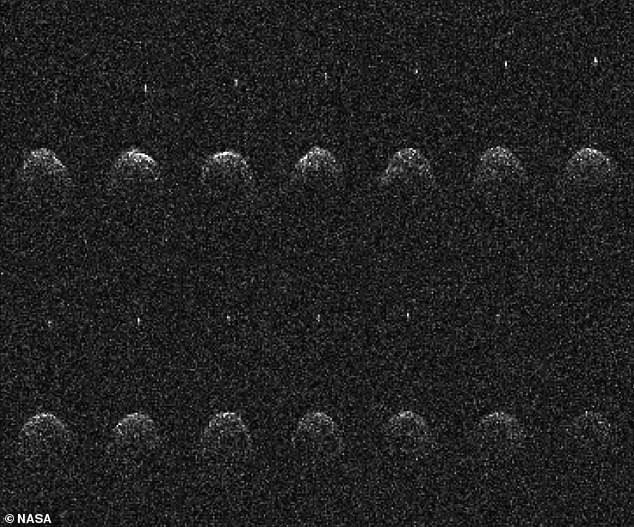 Of the two asteroids, Didymoon is more likely to hit Earth, given there are more space rocks its size that NASA and the Center for Near-Earth Object Studies (CNEOS) have yet to observe.

‘DART will be the first demonstration of the kinetic impactor technique, which involves sending one or more large, high-speed spacecraft into the path of an asteroid in space to change its motion,’ NASA said in a statement. 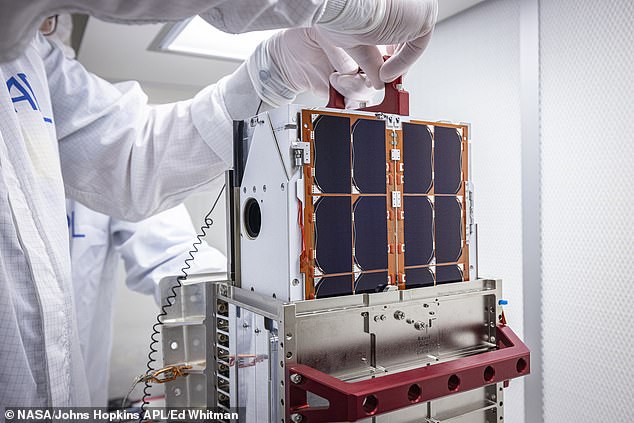 On October 1, NASA said that the cube satellite that will accompany DART was ready for installation

NASA considers any near-Earth object as ‘potentially hazardous’ if it comes within 0.05 astronomical units (4.6 million miles) and measures more than 460 feet in diameter.

According to the U.S. space agency, there are just over 25,000 NEOs, but many more are waiting to be discovered.

On October 1, NASA said that the cube satellite (CubeSat) that will accompany DART was ready for installation.

The CubeSat weighs 31 pounds and measures ‘roughly the length of an adult’s hand and forearm,’ the agency said.

DART is the first part of NASA’s asteroid defense strategy, designed in collaboration with the European Space Agency to protect Earth from a possible impact from a ‘hazardous asteroid.’ 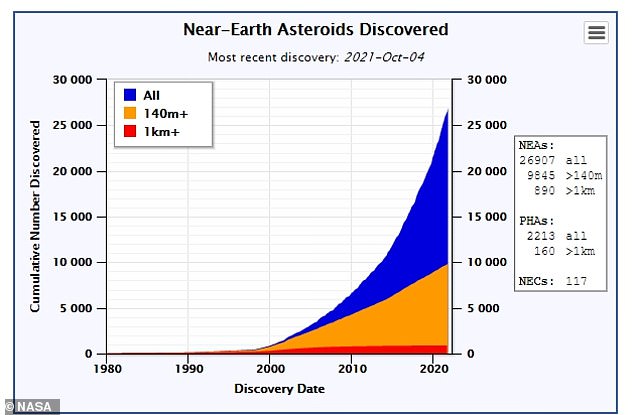 According to NASA, there are just over 25,000 near-Earth objects, but many more are waiting to be discovered

DART (pictured) is the first part of NASA’s asteroid defense strategy, designed in collaboration with the European Space Agency to protect Earth from a possible impact from a ‘hazardous asteroid’

‘Planetary defense is really about the present solar system and what are we going to do in the present,’ Dr Nancy Chabot, project scientist for DART, previously told DailyMail.com.

‘DART is not the final answer but rather just the first important step if we needed to defend the Earth from an asteroid impact.

‘Finding the asteroids that pose potential impact risks to Earth, tracking them, and characterizing them are critically important to all planetary defense efforts.’

The mission is being managed by NASA’s Planetary Defense Coordination Office and the Science Mission Directorate’s Planetary Science Division at NASA headquarters.

In August, a study from researchers in California said that several bumps would be needed to change the course of an asteroid, such as Bennu.

NASA has previously said that Bennu has a one in 1,750 chance of hitting Earth in the next 300 years.

Explained: The difference between an asteroid, meteorite and other space rocks

An asteroid is a large chunk of rock left over from collisions or the early solar system. Most are located between Mars and Jupiter in the Main Belt.

A comet is a rock covered in ice, methane and other compounds. Their orbits take them much further out of the solar system.

A meteor is what astronomers call a flash of light in the atmosphere when debris burns up.

This debris itself is known as a meteoroid. Most are so small they are vapourised in the atmosphere.

If any of this meteoroid makes it to Earth, it is called a meteorite.

Meteors, meteoroids and meteorites normally originate from asteroids and comets.

For example, if Earth passes through the tail of a comet, much of the debris burns up in the atmosphere, forming a meteor shower.