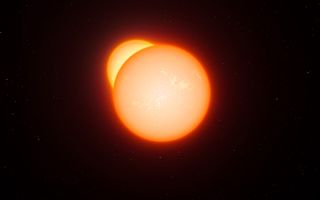 The most distant region of our solar system, a sphere of dark, icy debris out beyond Neptune, is too crowded. All that stuff out there, beyond the reach of the ancient disk of gas and dust that formed the planets, doesn’t match with scientific models of how the solar system formed. Now, a pair of researchers has offered a new take on this far-out mystery: Our sun has a long-lost twin. And the two stars spent their childhoods collecting the passing debris from interstellar space, crowding the outer reaches of the solar system.

We can’t see this twin. Wherever it is — if it ever existed — it broke away from its orbit with our sun eons ago. The two stars would have circled the Milky Way well over a dozen times since then, and may have ended up in totally different regions of space. But a record of that lost twin’s influence on our solar system may remain in our Oort cloud — a mysterious neighborhood of comets and space rocks at the outer bounds of our sun’s influence.

The Oort cloud is a strange place. Unlike the planets and asteroids of the inner solar system, which lie on a single flat disk around the sun, it forms a hollow sphere of debris encircling the solar system in every direction. Compared to the inner planets, these distant drifters experience very little of the sun’s gravity, and could easily be nudged out of their orbits and into interstellar space. The most distant objects in that sphere are barely linked to our sun at all, drifting along 100,000 times farther away from the sun than Earth.

“That’s actually halfway to the nearest star, Alpha Centauri,” said study co-author Avi Loeb, a Harvard astrophysicist. “If Alpha Centauri also has an Oort cloud, if all the stars have Oort clouds, then they’re all touching each other like billiard balls and space is filled with them.”

Our Oort cloud is less crowded with large objects than is the inner solar system. Fly through it in a spaceship and you’re unlikely to encounter anything at all. But it still hosts far more stuff than it should, Loeb said. Probably about 100 billion individual objects, mostly chunks of rock and ice, reside in the cloud. We can’t see them directly, but there’s plenty of evidence for them: the comets that plunge into the inner solar system from the Oort cloud at regular intervals.

There’s some evidence for even bigger things in the Oort cloud. For a few years now, scientists looking at the known objects beyond Neptune cluster have suggested that there may be an unknown planet out there tugging them into formation. This Planet 9 would be up to 10 times heavier than Earth, though it has yet to be seen. All that mass far beyond Neptune causes problems for astronomers, Loeb said. So does the fact that the Oort cloud forms a sphere, when all the planets and asteroids in the inner solar system seem to have formed from one flat disk of dust and gas.

“The question is: How did it come to exist?” Loeb told Live Science. “The popular view is that maybe they were scattered from the disk that made the planets.”

And if you assume there’s a big planet orbiting out there, the crowded Oort cloud gets even more difficult to explain.

In this case, together with his frequent collaborator, Harvard undergraduate Amir Siraj, Loeb suggested that the sun may have worked together with a lost twin to capture passing objects from deep space.

The theory goes like this: Astronomers already agree that the sun, like most stars, likely formed in a tight cluster with many other stars in a galactic pocket of dust and gas. That stellar nursery was probably full of rogue objects — interstellar comets and maybe heavier things like planets. But on its own, the sun’s gravity probably wasn’t strong enough to pull so many of those objects into Oort orbits.

But what if the sun and another star orbited around each other? Throw this binary companion into the mix, and the calculation changes. Assuming the two stars were about the same size, and orbited each other at 1,000 times the distance between Earth and the sun (about 1.5% of a light-year), their collective gravity could have snagged bits of rock and ice from the interstellar medium. By the time the sun and its twin drifted apart — their orbits likely broken by a close encounter with a third star — each would have been shrouded in an Oort cloud far thicker than what the sun and its twin would have captured on its own.

There are a few nice things about this theory, Loeb said. It neatly explains not only the number of objects in the Oort cloud but its shape. Objects snagged at random from deep space would have formed a sphere around the sun like we see, not a disk.

“The beautiful thing is we can test it,” he said.

If Loeb and Siraj are correct, then astronomers have likely underestimated the number of truly huge objects in the Oort cloud. With a binary companion, the sun should have captured not just the still-hypothetical Planet 9 from its birth cluster, but plenty of dwarf planets — objects like Ceres and Pluto from the inner solar system — that would still orbit in that far-distant part of space.

Right now, there’s no evidence for those dwarf planets. But the dim and distant Oort cloud is still so poorly understood that their absence in the data isn’t surprising, Loeb said.

And the Large Synoptic Survey Telescope (LSST), due for completion in Chile in 2021, will scan the sky in unprecedented detail for just these sort of dim, far-away objects, Loeb said. If the LSST’s first long scan of space reveals Planet 9 and a large population of additional dwarf planets in the Oort cloud that will strongly suggest our solar system once had a twin, he said.

Wherever that stellar twin ended up, if it existed, we’ll never find it again, Loeb said. Everything in the Milky Way has been stirred around too many times since the dissolution of our sun’s original birth cluster, 4.5 billion years ago. But we can imagine what it would have looked like: not a second sun, because even when the stars were twinned they were still distant from one another. Instead it might have seemed like a too-bright planet, moving very slowly across the sky.