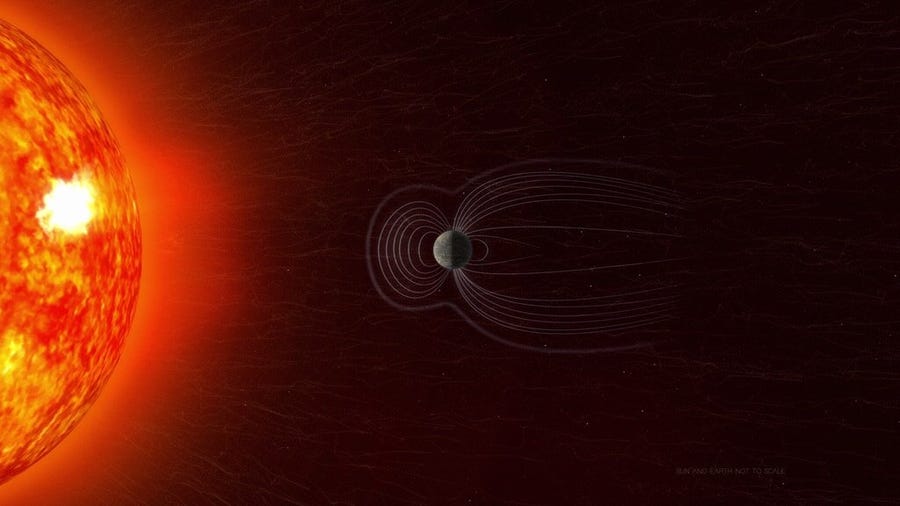 Earth’s suit of geomagnetic armor has a chink, and it’s growing.

This weak spot in our planet’s magnetic field is located above the southern Atlantic Ocean, between South America and southern Africa. Since 2014, the dent has grown in size and started to split, while also getting weaker.

For people on the ground, this isn’t cause for concern: The protective field still shields the planet from deadly solar radiation. But the South Atlantic Anomaly, as it’s appropriately named, does affect spacecraft, the International Space Station, and low-orbit satellites passing through the region. That’s because the higher quantities of charged solar particles seeping through can cause malfunctions in computers and circuitry.

That’s why NASA scientists are tracking this weak spot, the agency announced on Monday.

“Those particles can wreak havoc on satellite instrumentation, so it’s good to track the South Atlantic Anomaly, and especially its changing shape, so that we can take preventative actions,” Terence Sabaka, a NASA geophysicist told NBC News.

The weak spot is growing and splitting

Some studies suggest the SAA’s total area has quadrupled in the last 200 years, and that the SAA continues to expand year over year.

In the last five years or so, the anomaly may have split in half, according to scientists at NASA and the European Space Agency (ESA): One area of magnetic weakness has developed over the ocean southwest of Africa, while another sits east of South America.

The SAA has also weakened by 8% since 1970. That mirrors what’s happening to Earth’s magnetic field as a whole: The field has lost around 9% of its strength on average over the last 200 years, according to the ESA.

The weak spot spells trouble for satellites and the space station

A weaker field enables more charged particles from solar wind to make their way through Earth’s protective shield. Typically, the magnetic field repels these particles or traps them in areas called Van Allen belts, which suspend the particles 400 miles above the planet’s surface.

But in a dent like the SAA, those charged particles can get closer to Earth — so much closer that low-orbit satellites and the space station, which hovers about 220 miles up, are forced to pass through a region replete with them.

That can cause problems with electronic systems, interrupt data collection, and lead expensive computer components on spacecraft like the Hubble Space Telescope to age prematurely. Hubble passes through the anomaly in 10 of its 15 orbits around Earth each day, spending nearly 15% of its time in this “hostile region,” according to NASA.

The ISS has extra shielding to protect astronauts onboard from solar radiation, but the instruments in and around the space station aren’t as well protected. So if solar particles hit a key component of one of those instruments, it could fry them completely.

Nothing has gone haywire yet, but the SAA does cause ISS instruments like the Global Ecosystem Dynamics Investigation mission, which observes the planet’s diminishing tree cover from space, to lose a couple hours of data every month.

The ESA also noted that satellites flying through the region are “more likely to experience technical malfunctions,” like brief glitches that can disrupt communications.

That’s why it’s common for satellite operators to shut down non-essential components as the objects pass through the SAA to avoid losing instruments or the entire satellite, according to NASA’s Goddard Space Flight Center.

To predict how this dent will change in the future, NASA scientists are looking deep within the Earth.

The magnetic field exists thanks to swirling liquid iron in the planet’s outer core, some 1,800 miles beneath the surface. Anchored by the north and south magnetic poles (which tend to shift around and even reverse every million years or so), the field waxes and wanes in strength, undulating based on what’s going on in the core.

Periodic and sometimes random changes in the distribution of that turbulent liquid metal can cause idiosyncrasies in the magnetic field like the SAA. If you imagine the field as a series of rubber bands that thread through the magnetic poles, then changes in the core essentially tug on different bands in various places.

Those geomagnetic tugs influence how strong or weak certain parts of the field are, and can also cause the magnetic north pole to shift its location.

So NASA is continuously working to predict those tugs and the effect they’ll have on the SAA, via a model that forecasts the future of Earth’s magnetic field.

“This is similar to how weather forecasts are produced, but we are working with much longer time scales,” NASA mathematician Andrew Tangborn said in the release.

Read More:Science Explains ‘Jerking’ In Earth’s Magnetosphere Being Caused By Core: Well, That Isn’t Wrong- But What Is Causing Core Turbulence?

Read More:Molten Lava Blob Not Only Present In The Pacific, But Now Also Reported Under African Continent: The Implications Are Clear And Life-Ending

Read More:The Affect, Not The Cause: Scientists Suggest That Lava Lamp-Like Molten Blob Are What Is Causing Earth’s Magnetic Pole Reversal

Read More:Earth’s Core Affected: Strange Seismic Waves Rippled Around The World, And No Scientists Seem To Know Why

Read More:Strange Seismic Event That Rung The Whole Planet Like A Bell STILL Unexplained By Main Stream Media, But Electromagnetism May Be To Blame

Read More:Sudden Geomagnetic Change In South America Has Happened Before: What Was The Cause Of This Anomalous Behavior Last Time?