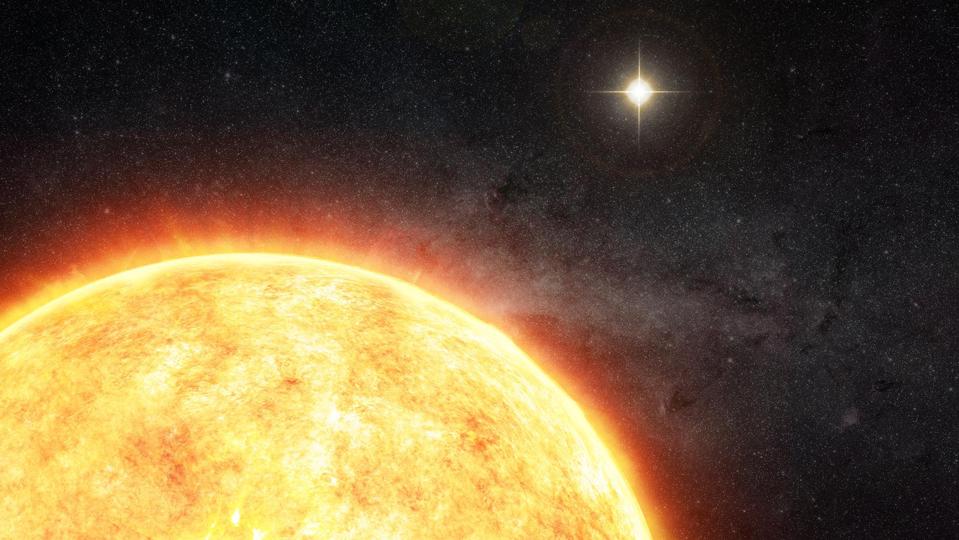 Our Sun had a companion and there could be many undiscovered dwarf planets in the outer Solar System. That’s according to a new paper from scientists from Harvard University.

Published today in The Astrophysical Journal Letters, the paper by Dr. Avi Loeb, Professor of Science at Harvard and Harvard undergraduate student Amir Siraj goes against the dominate “lone star” thinking about the Sun’s origin.

Their radical-sounding theory that the Solar System may have once been a binary star system—so consisting of two stars orbiting a common point in space—perhaps shouldn’t come as a surprise. “Most Sun-like stars are born with binary companions,” said Siraj.

Stars form from clouds of dust and gas in space. They don’t form alone, but in clusters, before dispersing. That’s the case with the Sun’s looser “sister” stars, but also for its theorized companion, a star of similar mass.

Where is this ‘second Sun’ now?

It could now be anywhere in the Milky Way. “Passing stars in the birth cluster would have removed the companion from the Sun through their gravitational influence,” said Loeb.

Where’s the evidence for a ‘second Sun?’

In the Oort Cloud, that spherical shell of icy objects in the outer Solar System. It’s thought that it’s made up from debris left over from the formation of the Solar System, but there appear to be too many objects. Only when a “second Sun” is inserted into this new paper’s model does the Oort cloud become as dense as we observe it today.

“Binary systems are far more efficient at capturing objects than are single stars,” said Loeb. “If the Oort cloud formed as observed, it would imply that the Sun did in fact have a companion of similar mass that was lost before the Sun left its birth cluster.”

That’s key because objects in the Oort Cloud—such as comets—may have brought water to our planet. “Objects in the outer Oort Cloud may have played important roles in Earth’s history, such as possibly delivering water to Earth and causing the extinction of the dinosaurs,” said Siraj.

However, what’s really exciting about the “second Sun” theory is the implications for “Planet Nine.”

What is ‘Planet Nine?’

“Planet Nine” is speculated to be a super-Earth—a planet about five to 15 times larger than Earth—that was first theorized in 2016.

“Planet Nine” is considered unlikely to exist because it would be difficult for the Solar System to collect enough material at such a distance from the Sun to form a super-Earth-sized planet. Which has led astronomers to think-up some even crazier-sounding theories about what, exactly, the observed “Planet Nine effect” could actually be.

One of Loeb and Siraj’s other theories is that it is that there is a primordial black hole in our solar system. The other is this new “second Sun” theory.

Excitingly, the latter predicts that there could be more than just one extra planet lurking in the outer Solar System.

As well as improving the chances of capturing a large planet, a “second Sun” should—in theory—have helped bring more objects into the outer Solar System. “Our new model predicts that there should be more objects with a similar orbital orientation to Planet Nine,” said Loeb.

How can the ‘second Sun’ theory be tested?

The researchers propose that the Vera C Rubin Observatory (VRO) in the thin mountain air at the peak of Cerro Pachón in Chile’s Elqui Valley—whose 10-year survey of the sky is due for “first light” in 2021—will be able to either rule out or confirm Planet Nine as a black hole within a year.

“If the VRO verifies the existence of Planet Nine, and a captured origin, and also finds a population of similarly captured dwarf planets, then the binary model will be favored over the lone stellar history that has been long-assumed,” said Siraj.

The VRO’s 10-year “Legacy Survey of Space and Time” (LSST) survey of the sky will image the entire southern hemisphere night sky every three nights, with each image covering an area 40 times the size of the full Moon.

The wide-angle observatory will alert astronomers to real-time events and construct a huge data archive. It’s expected to dramatically advance astronomers’ knowledge of the cosmos.

If there are a bunch of dwarf planets lurking in the outer Solar System—and even Planet Nine itself—the VRO could find them.

That would make the “second Sun” theory more likely to be correct, argue the researchers.