A magnitude-3 earthquake has rocked Sussex after hitting the English Channel.

The tremor was detected in the sea this morning at 9am, around 30 miles from Eastbourne.

Earthquake-tracking organisation EMSC-CSEM reported the quake struck at a depth of 4.3 miles beneath the surface.

It registered as 3.0 on the Richter scale, meaning it is considered a minor tremor, though vibrations can still be felt nearby. 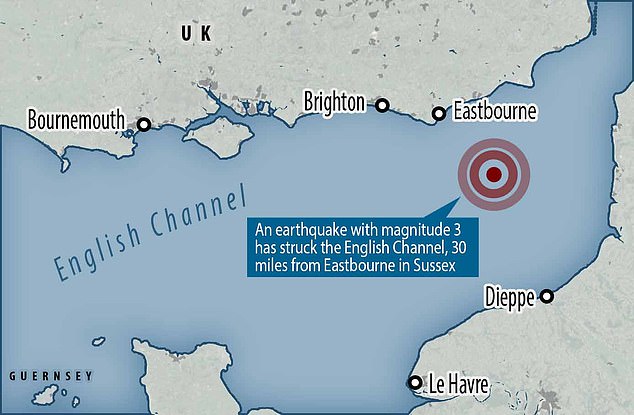 The earthquake was registered all the way in London, which is 75 miles away.

It is not the first time Sussex has been struck by an earthquake this year after a tremor was recorded at Gatwick on May 4.

The British Geological Survey said they had received dozens of reports about the quake, while many residents on social media said they felt a tremor.

A local tweeted: ‘As if I’m saying I’ve just been woken up by an earthquake again. What is happening?’

Barman William Ward, 21, told the Sun: ‘It was really weird, I was serving coffee at the time when I noticed the fridge containing the wine bottles was shaking.

‘The glass was rattling, it was bit like Jurassic Park. I couldn’t actually feel it myself but it lasted for about ten to 15 seconds and I assumed it must have been an earthquake.

‘Luckily it wasn’t more severe as I’m perched on the seafront in the cafe.’

This is not the first time that an earthquake has been felt in Sussex this year, after the British Geological Survey recorded a tremor at Gatwick in the early hours of May 4.