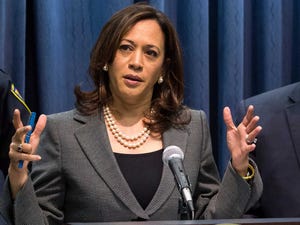 One of California Attorney General Kamala Harris’ (D) staffers was arrested last week and “accused of operating a rogue police force that claimed to exist for more than 3,000 years,” The Los Angeles Times reported Wednesday.

Brandon Kiel, deputy director of community affairs at the California Department of Justice, and two others — David Henry and Tonette Hayes — reportedly face charges for their roles in the Masonic Fraternal Police Department.

“Suspicions about the Masonic Fraternal Police Department — whose members trace their origins to the Knights Templar — were aroused when various police chiefs in Southern California received a letter in late January that announced new leadership for the group,” the Times’ Matt Hamilton wrote.

The Los Angeles County Sheriff’s department said in a statement that the Masonic Fraternal Police Department was not a legitimate police force and that Kiel, Henry, and Hayes were arrested for allegedly impersonating police officers.

“Detectives conducted a thorough investigation in collaboration with several law enforcement agencies and determined MFPD was not a legitimate police agency,” the sheriff’s department said in a statement, according to NBC News.

The Times called attention to a website purporting to represent the Masonic department. The site claims the police department is widely respected and operates in 33 states.

Harris is the Democratic front-runner to replace Sen. Barbara Boxer (D-California) in 2016. Her office declined to comment to the Times but said Kiel had been placed on administrative leave.