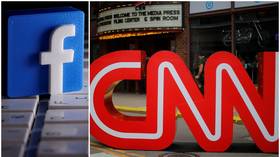 Facebook fact-checker Lead Stories is a biased outfit bristling with ex-CNN staffers that presents itself as neutral, despite most of its employees having donated to the Democratic Party, a conservative outlet has revealed.

The National Pulse (TNP), whose story about supposed financial links between Black Lives Matter, Democratic presidential candidate Joe Biden, and fundraiser ActBlue was flagged as “partly false” by Lead Stories on Facebook, did some digging on Wednesday to find out who was behind the smear, after their efforts to contest the label were apparently stonewalled.

What they discovered was an organization staffed almost entirely by Democratic donors, half of whom had worked for CNN in the past. A quarter of the employees were recurring Democratic donors, TNP revealed, suggesting an egregious conflict of interest, given the story they’d flagged at the conservative outlet was about contributions to a Democratic presidential campaign.

Lead Stories founder Perry Sanders has donated over $10,000 to Democratic political campaigns, including Hillary Clinton’s and Barack Obama’s presidential runs, TNP showed, providing copious links to back up the laundry list of partisan affiliations it had stumbled across. Several other writers had Democratic contributions on their records too. One, Gita Smith, was listed in 99 separate small-dollar donations to various Democratic candidates, as well as some contributions directly to ActBlue and the activism group Indivisible.

Editor-in-chief Alan Duke, who had initially rebuffed TNP’s editor’s request to have its fact-check reconsidered, spent nearly three decades with CNN as a reporter and editor, while senior editor Monte Plott spent over a decade with the Trump-loathing network. Five other names on the group’s masthead had also worked at CNN at some point.

Nor were CNN and the Democratic Party the only partisan affiliations to be found among the Lead Stories staff. Before spending 10 years with CNN, writer Jessica Ravitz – who bills herself as a “freelance journalist and storyteller” on her LinkedIn page – spent nearly four years with the Anti-Defamation League, a self-styled anti-“hate” watchdog that spends most of its considerable resources demonizing political voices that deviate from the neoliberal centrist mainstream-media line.

Lead Stories had unwittingly triggered the investigative frenzy by flagging TNP’s story titled “Black Lives Matter Website, ‘Defund the Police’ Donations Go to ‘Act Blue’, the ‘Biden for President’ Campaign’s Top Source of Donations” on Wednesday. It also overlaid it with a grayed-out “party-false information” warning screen on Facebook and included the story in the “Hoax Alert” section of its website. Ironically, the fact-checker was actually correct in this case: BLM’s donations go through, not to ActBlue, which is a payment processor for Democratic campaigns and not the ultimate source of the Biden campaign’s cash.

However, when TNP editor-in-chief Raheem Kassam corrected the headline to change “to” to “through,” he claimed Lead Stories refused to lift the “partly false” distinction, even though the new headline was factually correct and the meat of the story – that Biden’s campaign and Black Lives Matter were using the same payment processor and, thus, gave the impression of being ideological peers – hadn’t been called into question.

What has been called into question is the idea of Lead Stories as an independent fact-checker. While Facebook defended it by pointing out that Lead Stories is certified by the Poynter Institute’s International Fact-Checking Network (IFCN), such a designation is unlikely to put any doubts to rest, given that Poynter and the IFCN are supported by such bogeymen of bias as eBay billionaire Pierre Omidyar and currency speculator George Soros’s Open Society Foundations.