An Arkansas man who says he received a packet of unknown seeds from China has planted them — and KSFM-TV calls the burgeoning plant “wild.”

Packages of unsolicited seeds from China began showing up in mailboxes across the country in July, stumping agriculture and commerce officials in the process.

In early statements, the USDA said it believes that the products are part of what could be a “brushing scam,” in which people receive unsolicited items to, in turn, create fake customer reviews for the purpose of boosting sales.

What are the details?

“We … planted the seeds just to see what would happen,” he told the station, revealing that the large plant — which initially grew from orange-colored flowers — is producing large, white fruits.

“Every two weeks I’d come by and put Miracle-Gro on it, and they just started growing like crazy,” he admitted.

The Booneville resident said that he only opted to plant the seeds before the USDA issued a warning against doing so to U.S. residents. 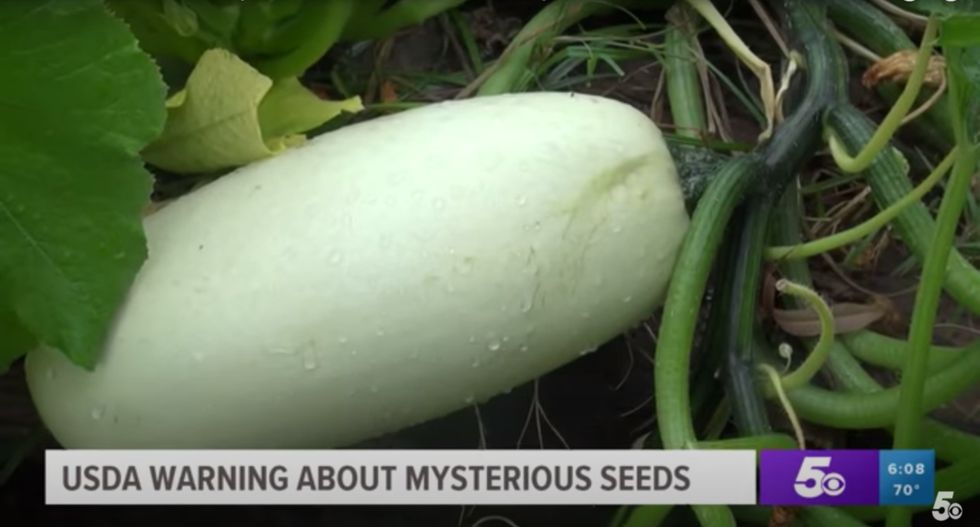 Image source: KSFM-TV video screenshotIn a statement, a spokesperson for the Arkansas Department of Agriculture warned, “Our concern is from an invasive pest aspect: These seeds could introduce an invasive weed or an invasive insect pest or a plant disease.”

The station reports that the department of agriculture plans to remove the plant from Crenshaw’s property out of an abundance of caution.

The spokesperson adds that the department isn’t sure what the plants are at the time of this reporting, but it has plans to study the growth.

A Wednesday report from Newsweek reveals that U.S. consumers are receiving more unsolicited packages — this time containing items like sunglasses and used socks.

One woman tells the outlet that she received masks from China — but she never placed such an order.

Another woman said that she received a pair of knock-off Ray-Ban-style sunglasses. She thinks there’s something more nefarious afoot than just bolstering online reviews.

“I don’t think people are sending this in goodwill in my opinion,” she says. “I’m just afraid that there may be something harmful to them.”

Another woman says she received used socks, but she didn’t think too much about it other than it being “odd.”

A brushing scam can be a problem for a person, as it could indicate that their personal information has been leaked.

Ray Walsh, a data privacy expert, told Newsweek, “Anybody who received an unexpected package needs to be aware that their data is being misused by the seller. If you receive a brushing parcel it is vital that you hand it in to the police so that they can forward it to the U.S. postal inspector’s office for the purpose of tracking where it came from. Items received could be dangerous, which means that they must be disposed of correctly.”

Read More:What Is Up With The Mysterious Seed Packets Sent Unsolicited To US Residents? BioWarfare? Blame Game? Innocent Mistake?