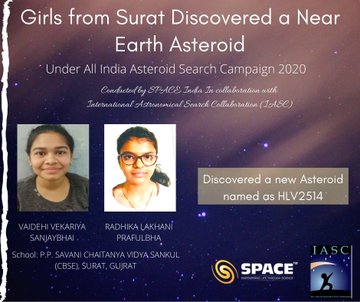 The two girls, Vaidehi Vekariya and Radhika Lakhani, both 14 and in 10th grade, were participants in a project sponsored by Space India and NASA. The project allows students to look at images from a telescope in Hawaii.

Vaidehi and Radhika used specialized software to analyze the images snapped by the Pan-STARRS telescope in Hawaii, and made the discovery in June, Space India told Reuters.

The asteroid, which is named HLV2514, is slowly shifting in its orbit near the red planet and is moving toward Earth, CNN said. It won’t be near Earth for 1 million years, however, and even then will still be 10 times as far away as the moon.

The two girls live in the city of Surat in the state of Gujarat in western India.

The pair gave it a random name for now but are looking forward to the opportunity to possible name it something else once confirmed, according to VICE.

“I look forward to …when we will get a chance to name the asteroid,” Vaidehi told Reuters, adding that she wants to become an astronaut when she is older.

Radhika said she is working hard on her education. “I don’t even have a TV at home, so that I can concentrate on my studies,” according to Reuters.

The asteroid will be officially christened only after NASA confirms its orbit.

Read this:NASA will launch a balloon the size of a football stadium into the stratosphere