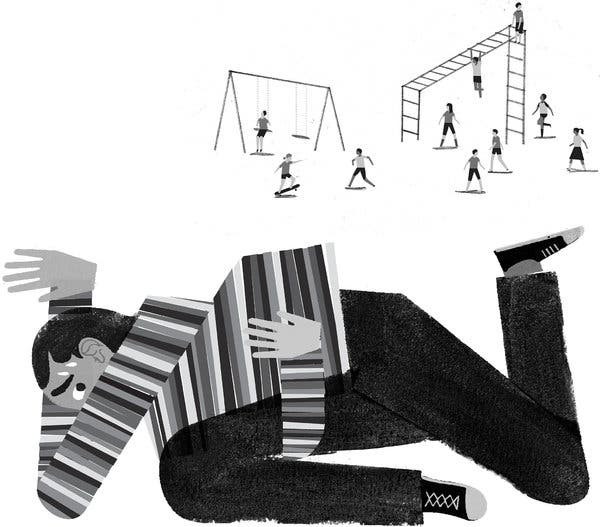 CAMDEN, N.J. — THINK back to your first childhood crush. Maybe it was a classmate or a friend next door. Most likely, through school and into adulthood, your affections continued to focus on others in your approximate age group. But imagine if they did not.

By some estimates, 1 percent of the male population continues, long after puberty, to find themselves attracted to prepubescent children. These people are living with pedophilia, a sexual attraction to prepubescents that often constitutes a mental illness. Unfortunately, our laws are failing them and, consequently, ignoring opportunities to prevent child abuse.

The Diagnostic and Statistical Manual of Mental Disorders defines pedophilia as an intense and recurrent sexual interest in prepubescent children, and a disorder if it causes a person “marked distress or interpersonal difficulty” or if the person acts on his interests. Yet our laws ignore pedophilia until after the commission of a sexual offense, emphasizing punishment, not prevention.

Part of this failure stems from the misconception that pedophilia is the same as child molestation. One can live with pedophilia and not act on it. Sites like Virtuous Pedophiles provide support for pedophiles who do not molest children and believe that sex with children is wrong. It is not that these individuals are “inactive” or “nonpracticing” pedophiles, but rather that pedophilia is a status and not an act. In fact, research shows, about half of all child molesters are not sexually attracted to their victims.

A second misconception is that pedophilia is a choice. Recent research, while often limited to sex offenders — because of the stigma of pedophilia — suggests that the disorder may have neurological origins. Pedophilia could result from a failure in the brain to identify which environmental stimuli should provoke a sexual response. M.R.I.s of sex offenders with pedophilia show fewer of the neural pathways known as white matter in their brains. Men with pedophilia are three times more likely to be left-handed or ambidextrous, a finding that strongly suggests a neurological cause. Some findings also suggest that disturbances in neurodevelopment in utero or early childhood increase the risk of pedophilia. Studies have also shown that men with pedophilia have, on average, lower scores on tests of visual-spatial ability and verbal memory.

The Virtuous Pedophiles website is full of testimonials of people who vow never to touch a child and yet live in terror. They must hide their disorder from everyone they know — or risk losing educational and job opportunities, and face the prospect of harassment and even violence. Many feel isolated; some contemplate suicide. The psychologist Jesse Bering, author of “Perv: The Sexual Deviant in All of Us,” writes that people with pedophilia “aren’t living their lives in the closet; they’re eternally hunkered down in a panic room.”

While treatment cannot eliminate a pedophile’s sexual interests, a combination of cognitive-behavioral therapy and medication can help him to manage urges and avoid committing crimes.

But the reason we don’t know enough about effective treatment is because research has usually been limited to those who have committed crimes.

Our current law is inconsistent and irrational. For example, federal law and 20 states allow courts to issue a civil order committing a sex offender, particularly one with a diagnosis of pedophilia, to a mental health facility immediately after the completion of his sentence — under standards that are much more lax than for ordinary “civil commitment” for people with mental illness. And yet, when it comes to public policies that might help people with pedophilia to come forward and seek treatment before they offend, the law omits pedophilia from protection.

The Americans With Disabilities Act of 1990 and Section 504 of the Rehabilitation Act of 1973 prohibit discrimination against otherwise qualified individuals with mental disabilities, in areas such as employment, education and medical care. Congress, however, explicitly excluded pedophilia from protection under these two crucial laws.

It’s time to revisit these categorical exclusions. Without legal protection, a pedophile cannot risk seeking treatment or disclosing his status to anyone for support. He could lose his job, and future job prospects, if he is seen at a group-therapy session, asks for a reasonable accommodation to take medication or see a psychiatrist, or requests a limit in his interaction with children. Isolating individuals from appropriate employment and treatment only increases their risk of committing a crime.

There’s no question that the extension of civil rights protections to people with pedophilia must be weighed against the health and safety needs of others, especially kids. It stands to reason that a pedophile should not be hired as a grade-school teacher. But both the A.D.A. and the Rehabilitation Act contain exemptions for people who are “not otherwise qualified” for a job or who pose “a direct threat to the health and safety of others” that can’t be eliminated by a reasonable accommodation. (This is why employers don’t have to hire blind bus drivers or mentally unstable security guards.)

The direct-threat analysis rejects the idea that employers can rely on generalizations; they must assess the specific case and rely on evidence, not presuppositions. Those who worry that employers would be compelled to hire dangerous pedophiles should look to H.I.V. case law, where for years courts were highly conservative, erring on the side of finding a direct threat, even into the late 1990s, when medical authorities were in agreement that people with H.I.V. could work safely in, for example, food services.

Removing the pedophilia exclusion would not undermine criminal justice or its role in responding to child abuse. It would not make it easier, for example, for someone accused of child molestation to plead not guilty by reason of insanity.

A pedophile should be held responsible for his conduct — but not for the underlying attraction. Arguing for the rights of scorned and misunderstood groups is never popular, particularly when they are associated with real harm. But the fact that pedophilia is so despised is precisely why our responses to it, in criminal justice and mental health, have been so inconsistent and counterproductive. Acknowledging that pedophiles have a mental disorder, and removing the obstacles to their coming forward and seeking help, is not only the right thing to do, but it would also advance efforts to protect children from harm.

Read More:The UN Is Normalizing Pedophilia To Prey On Children

Read More:Pedophilia As A Disorder That Can Be Treated: Scandinavian Experts Encourage The Use Of Child-Like Sex Robots To Combat Abuse