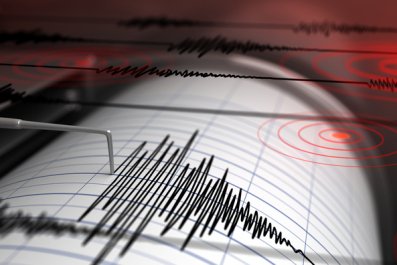 An ongoing earthquake swarm in Iceland has now reached over 10,000 quakes since it began on June 19. This is the biggest swarm to hit the Tjörnes Fracture zone in the north of the country in almost half a century, and experts are unsure what is causing it.

The earthquake swarm to the northeast of the town of Siglufjörður is ongoing. Experts with the Iceland Meteorological Office (IMO) said that of the 10,000 earthquakes, three had measured magnitude 5 or above. The largest, magnitude 5.8, hit around 18 miles from Siglufjörður. “Seismic activity if still ongoing and there are chances of more earthquakes of this magnitude occurring in the area,” the IMO said in a statement.

Kristín Jónsdóttir, Earthquakes Hazards Officer for the IMO, previously told Newsweek the swarm was the largest recorded in the Tjörnes Fracture Zone in the past 40 years. “It is very difficult to say [when the swarm will end],” she said. “The behavior is episodic, we record hundreds of earthquakes in a few hours and then it becomes quiet and all of a sudden it starts again. The last swarm in 2012 was ongoing for a few weeks. Let’s hope we only have a few weeks to go.”

The IMO said that between June 22 and 28, over 3,300 earthquakes were recorded in the region. Of these, 2,800 were west of the Húsavík-Flatey Islands fault.

Jónsdóttir said stress builds at the Tjörnes Fracture zone as tectonic plates move past one another in opposite directions. This fracture zone separates the country’s northern volcanic zone and the Kolbeinsey Ridge.

She had previously told Icelandic National Broadcasting Service RÚV that the cause of the current earthquake swarm was not known, but that they were “trying to figure out what’s going on.” She said it could relate to geothermal production in the area.

Read More:Intense Earthquake Swarm Off Northern Iceland Could Be A Sign Of Things To Come