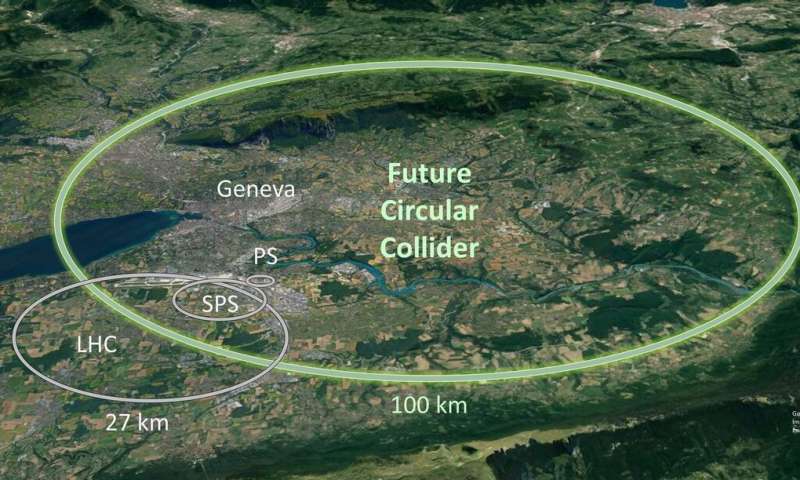 The CERN Council has unanimously endorsed the idea of building a newer, larger circular supercollider, dubbed the Future Circular Collider (FCC). The group made the announcement on June 19. The move is the first step toward building a 100 TeV 100-kilometer circumference collider around Geneva. As part of the vote, the group approved the launch of a technical and financial feasibility study for the new collider.

Even as the team at CERN was reporting evidence of the Higgs boson, back in 2012, plans for a new, larger super collider were being proposed. Several ideas have been put forth, but they are now all moot except for the 100-kilometer plan—it calls for building the collider around the city of Geneva, intersecting the LHC at two points. The plan calls for first building a collider by 2040 that would smash electrons into their antimatter partners, called positrons, allowing for closer study of the Higgs and possibly dark matter. Initial estimates suggest it would cost approximately €21 billion.

The approval by the CERN council was not an official go-ahead for the project—it was a go-ahead to look into its feasibility. The next step will involve figuring out where to dig the new tunnel and whether it will be possible to do so in the area near the LHC. If the feasibility study and financial estimates work out as hoped, the next step would be actual approval for the project to move forward. Once that happens, the funds for the project would have to be made available by participating countries in Europe and the U.K.—and this time, perhaps, from other countries such as the U.S., China or Japan. Also, research efforts would have to be developed and launched to design and build the hardware needed for the project.

The project also calls for a second stage that would entail dismantling the collider at some distant time and building a proton-proton collider in its place. Such a collider would not be built for achieving specific goals, however, as has been the case with other colliders in the past—instead, it would be used to conduct experiments meant to test various theories that seek to explain the nature of the universe.

Read More:Supersymmetry; Proof Of Other Dimensions- This Is What The Aim Of CERN Is

Watch More:Scientists Aren’t Going To Tell You This

Read More:Scientists At CERN Hope To Make Contact With Parallel Dimensions In The Next Few Days

Watch More:Key To The Bottomless Pit: Using Gravity To Poke Holes In Dimensions