A top acting agency has just added virtual celebrity Miquela to their books. In an age of pandemic, might such digital stars become the norm? 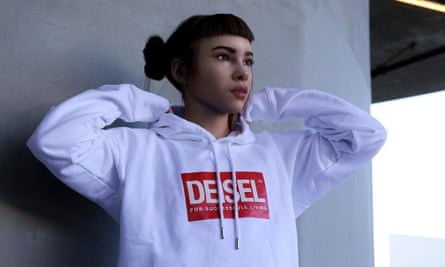 Even better than the real thing … Miquela.

With A-listers such as Scarlett Johansson, Will Smith and Steven Spielberg on its books, Creative Artists Agency (CAA) is a fixture of the Hollywood establishment, but its latest client is a little different. On 6 May, Variety revealed that CAA had signed up Miquela, a 19-year-old, Brazilian-American model, pop singer, influencer and self-described “change-seeking robot with the drip”. That’s right: Miquela isn’t an actual human. She is a virtual celeb, created in 2016 by a California tech startup named Brud. But her career is looking pretty real right now.

According to Variety, CAA will work with Miquela in areas “including TV, film, and brand strategy and commercial endorsements, raising the prospect of a movie or show featuring the character”. So there’s a tip for all you struggling actors wondering where you have been going wrong: try not existing!

From an industry perspective, virtual actors are an enticing prospect. They are literally totally malleable. They will never complain, they are always in prime condition and camera-ready (creepily, Miquela is for ever 19 years old). They will even work through an industry-stalling pandemic without complaint. And their salary demands are competitive. Miquela also brings along a fanbase. She has 2.2 million Instagram followers, she’s duetted with real-life singers, and she has sagas with virtual boyfriends and frenemies (no doubt negotiating their own deals right now). She pushes the right buttons: young, fashionable, fluent in social-media discourse. She is not ambitious, she’s just programmed that way.

Is Miquela the vanguard of an army of virtual actors, poised to put human stars out of work? If that is the future, then blame the movies for paving the way with stories such as Her, Ex Machina and, especially, Al Pacino’s forgotten romcom Simone (where his virtual thesp wins the best actress Oscar). We are not there yet, though. For one thing, Miquela is not a genuine AI; she is scripted and voiced by humans, so is effectively an animated character. Nor is she much of an actor. Her face has limited range when it comes to nuance or emotion. Mind you, they said that about Arnold Schwarzenegger once.

CAA clearly senses which way the wind is blowing. It knows that being a successful actor is never just about acting. The reason, say, Vin Diesel or Dwayne Johnson command huge salaries is not because they are so good at inhabiting a role (sorry guys, hate to break it to you). Celebrity is an inextricable factor in the equation, and it’s no longer exclusive to humans. You could argue that virtual actors will never advance the arts or capture essential truths about humanity, but they don’t have to. They just have to fake it. And isn’t that what acting’s all about, anyway?