At a time when simply sharing space with a fellow human being can be a dangerous activity, many governments, airports, and hospitals are discovering the non-contagious delights of robots, which can be deployed to clean surfaces and deliver goods without fear.

Their latest deployment comes from Singapore, where municipal authorities are using Boston Dynamics’ four-legged Spot robot to remind park visitors to keep a safe distance from one another. Starting today, a Spot unit will patrol the city’s Bishan-Ang Mo Kio Park as part of a two-week trial, broadcasting prerecorded messages “to remind park visitors to observe safe distancing measures.”

The robot is fitted with cameras that will be used to estimate the number of visitors to the park, but Singapore’s National Parks Board (NParks) says it won’t collect personal data or use the video to identify individuals. Spot is remotely controlled, but it has built-in sensors to stop collisions and will be accompanied by a guide. If the trial is successful, NParks says the robot could be deployed full-time during peak hours in the park.

Using the robot will reduce the need for staff to patrol the grounds, says NParks, and it “lowers the risk of exposure to the virus.” According to local newspaper The Straits Times, the board is also considering deploying the robot elsewhere in the city. Signs posted in the park ask visitors not to “disrupt” the robot on its patrols. 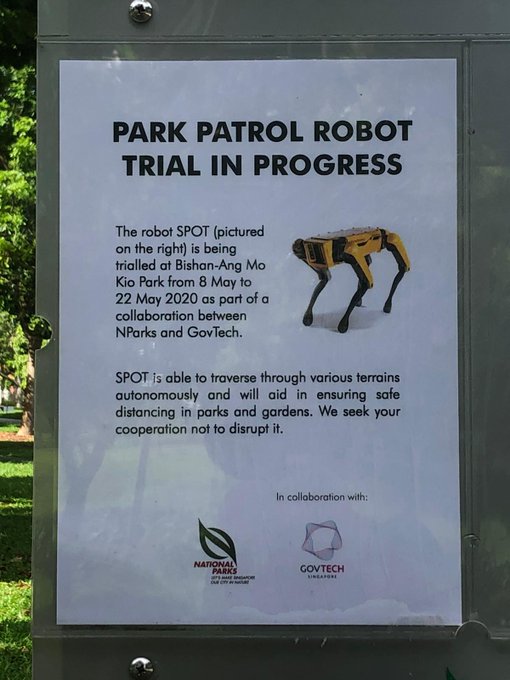 This isn’t the first time robots have been used to remind the public of social distancing measures. Drones in China and the US have been deployed to warn / cajole / coerce people, and the security guard robots from US firm Knightscope (best known for the Dalek-like machine that drove itself into a fountain) have been given a software update that lets them broadcast public safety messages — from “Please maintain a safe distance between you and other people” to “Washing our hands is fun! Oh, wait… I don’t have any hands.”

The contagious nature of the pandemic has certainly given robotmakers new opportunities to deploy their creations, and the coronavirus may end up accelerating the adoption of these machines. Spot the robot is currently undergoing trials in hospitals to help with coronavirus treatments, for example, and delivery robot companies say demand for their technology has rocketed in recent weeks. Acting as a loudspeaker-on-legs may only be the beginning for these robot deployments.

Read More:Goodbye Forever: Robots And Drones Will Put An End To Retail Stores