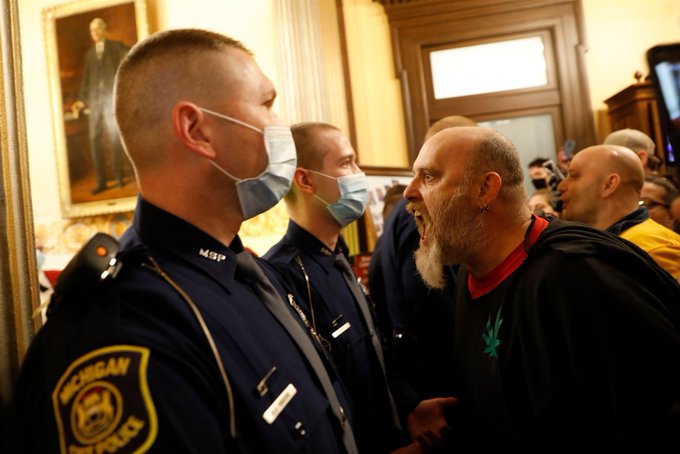 Hundreds of people protested outside the Michigan Capitol building in Lansing on Thursday, with some pushing inside while the Legislature was debating an extension of Gov. Gretchen Whitmer’s state of emergency in response to the coronavirus pandemic.

Protesters held signs, waved American flags and even carried firearms, while some chanted “Let us in!” and “This is the people’s house, you cannot lock us out.” Others tried to get onto the House floor but were blocked by state police and sergeants-at-arms, according to NBC affiliate WDIV of Detroit.

A state police spokesman told NBC News that it is legal in Michigan to carry firearms as long as it’s done with lawful intent and the weapon is visible.

Michigan United for Liberty organized the protest, dubbed the American Patriot Rally, to call for the reopening of businesses.

State lawmakers, who are Republican-led in both chambers, on Thursday night declined to extend the state’s emergency declaration before it expired at midnight. Instead, they voted to bring a lawsuit to challenge Whitmer’s authority and actions to fight the coronavirus pandemic.

“Republican lawmakers are putting their heads in the sand and putting more lives and livelihoods at risk, Whitmer said in a statement after the Legislature’s vote. “I’m not going to let that happen.”

Whitmer, who has faced fierce backlash for her strict stay-at-home mandate, extended the order earlier this month until May 15, but she eased some restrictions on public activities as the state’s coronavirus cases stabilize. Michigan, however, still has more than 40,000 cases and is one of the hardest-hit states.

The emergency declaration gives Whitmer authority to issue executive orders during a crisis; its extension is separate from that of the stay-at-home order.

As the protests moved indoors from the rainy steps of the Capitol, police took the temperatures of those entering the building using forehead thermometers, according to NBC affiliate WOOD of Grand Rapids.

Like the “Operation Gridlock” demonstration April 15 over Whitmer’s stay-at-home order, many demonstrators appeared to be supporters of President Donald Trump, donning “Make American Great Again” campaign hats and, in one instance, putting on a dance routine by two girls wearing masks that appeared to be of Trump and former President Barack Obama.

Read More:Expert Says US On The Brink Of Mass Civil Unrest