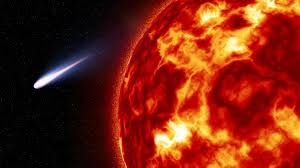 As of April 14, ATLAS’s overall magnitude has faded to 9.4. While it continues to fragment and become more diffuse, it’s not yet dead. The comet’s fragmenting pseudo-nucleus is shown in these images taken between April 6 to 14.

The brightest fragment located off-axis from the others may be the original nucleus. In the last frame, the fragment is captured with a small tail of its own.

Observers are still able to spot the comet using 100 mm (4 inches) binoculars and 150 mm (6 inches) telescopes under dark skies. The comet’s overall magnitude has dimmed to 9.4 on April 14, but obvious changes have taken place within the inner coma. 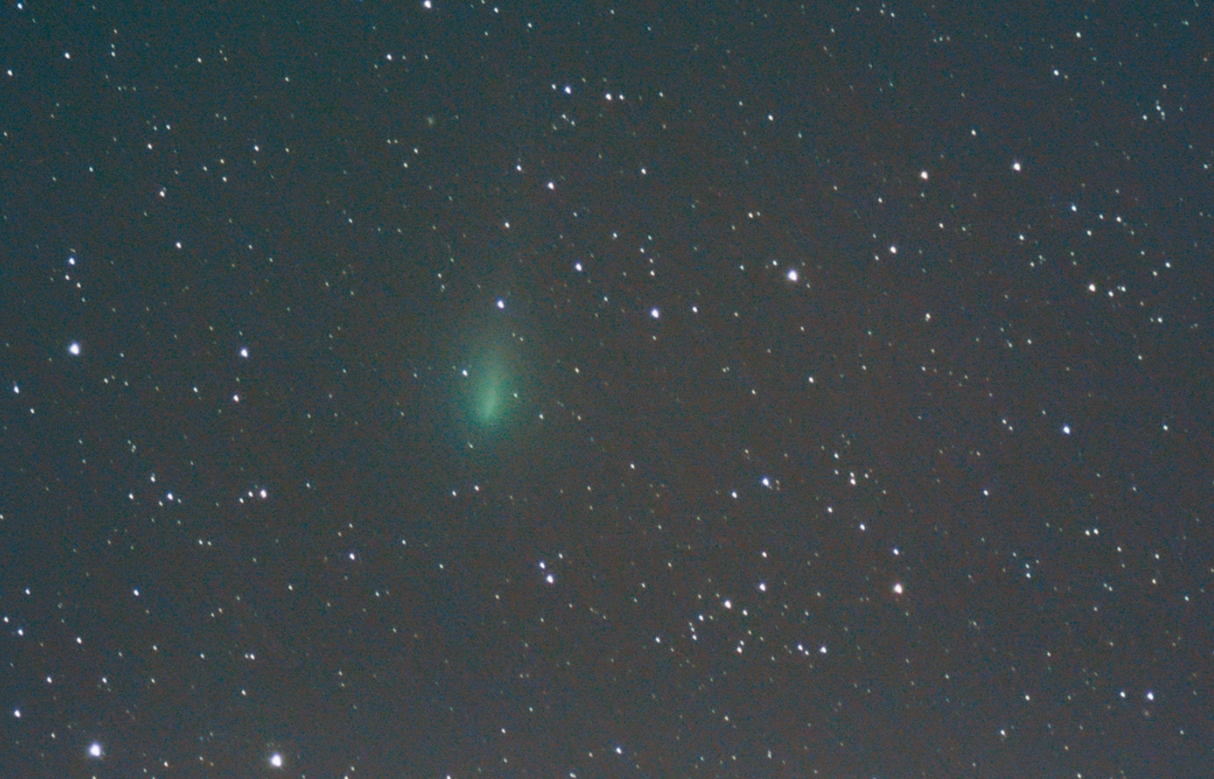 “On two recent evenings, I was able to momentarily catch sight of the brightest fragment (pictured above) along with one or two additional fuzzy stellarings, faint starlike objects that appear on a nebulous object, in my 381 mm (15 inches) Dob at 400x,” King stated.

“I encourage observers with larger telescopes to seek these amazing nuggets out. How often do we get the opportunity to see a comet come apart?”

ATLAS measured 3′ across on April 14, “but when I added a Swan filter, which enhances emissions from gassy comets, Comet ATLAS brightened relative to the background sky and the coma expanded to 5′,” King explained.

Meanwhile, a new comet — C/2020 F8 (SWAN) — has been found by Michael Mattiazzo of Australia in imagery captured by the Solar Wind ANisotropies (SWAN) camera.

At present, SWAN is at 8th magnitude. It remains compact and is constantly brightening as it moves across Piscis Austrinus at dawn, for observers in the Southern Hemisphere. It is expected to be seen by the naked eye by mid-May. An image on April 13 showed the comet with a bright, dense coma and a tail.

As the comet continues to plow rapidly northward, it will reach a peak magnitude of 3.5 around May 15 to 23, racing from Triangulum across Perseus. Although SWAN is a bright comet, it will remain low in the northeastern sky at the beginning of dawn throughout the best part of its appearance.

“Comet SWAN arrived just in time to pinch-hit for ATLAS in the event that comet disintegrates completely. It even reaches peak brightness in the same area of the sky,” said King. 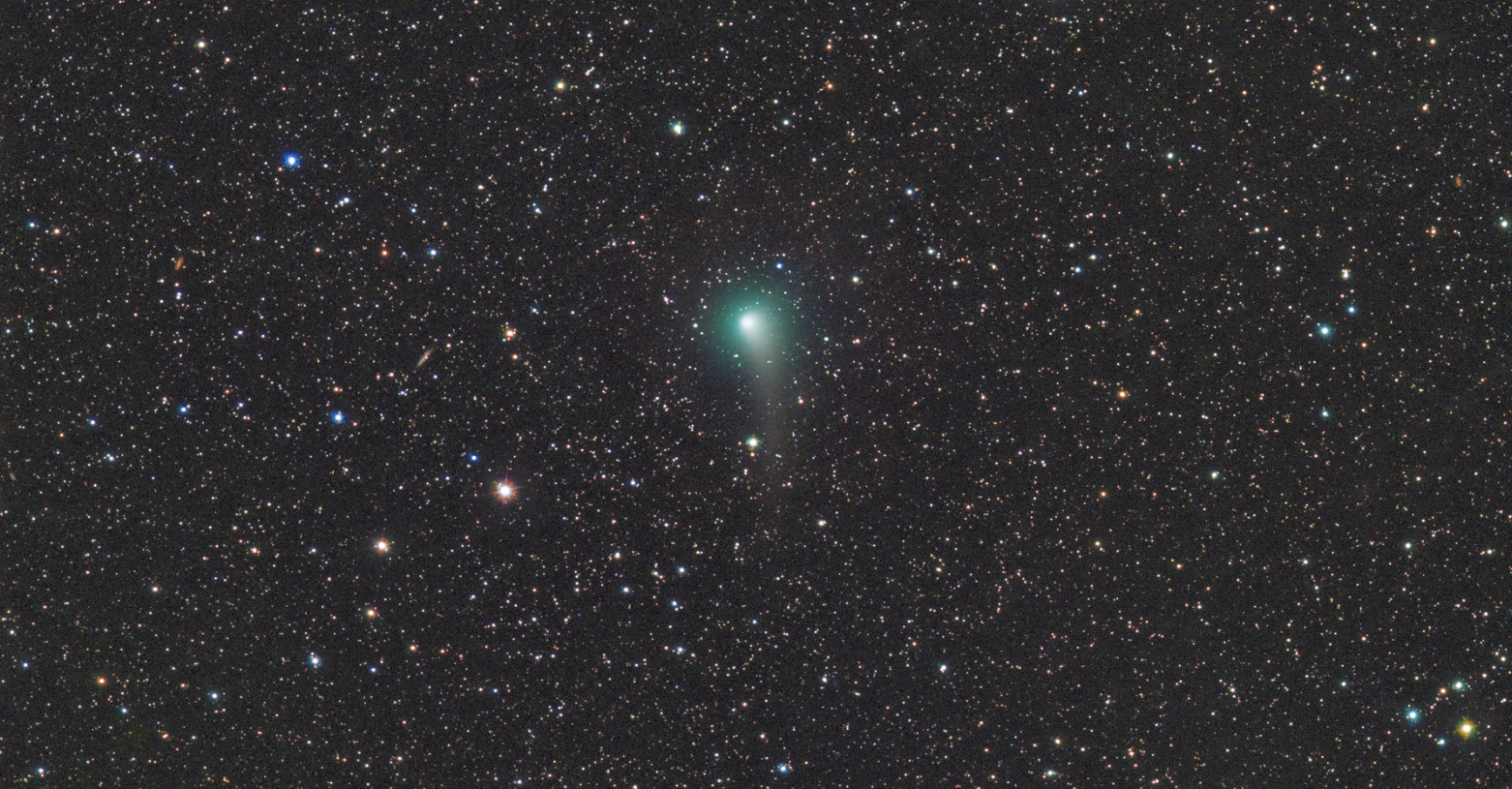 The third comet seen over the skies, the C/2017 T2 (PanSTARRS), remains steady as it travels across Camelopardalis toward the Big Dipper. At magnitude 8.5, it is easy to be observed under dark skies using 10×50 binoculars. 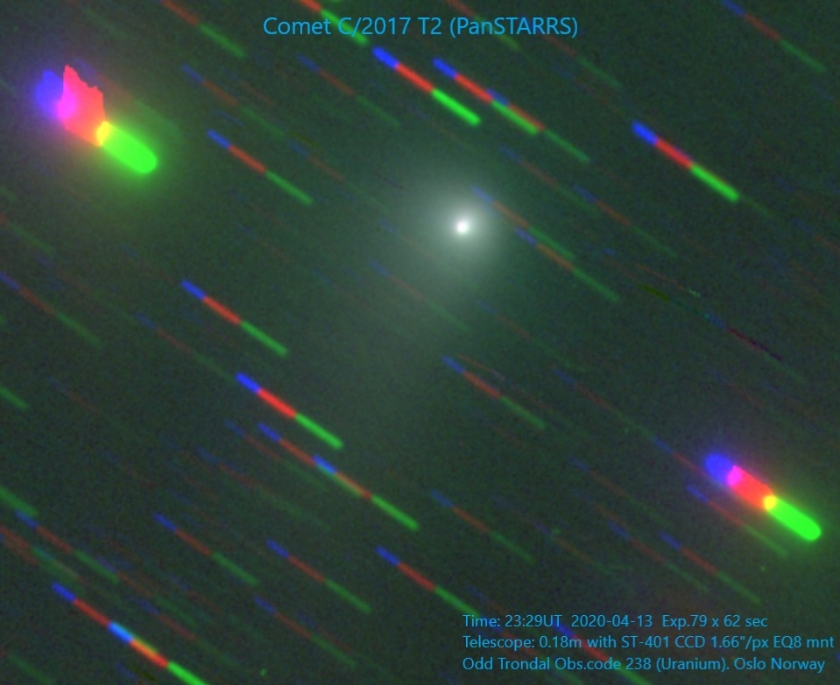 King remarked that a second ATLAS comet has displayed notable staying power. C/2019 Y1 began as a 19th magnitude blip and was discovered on December 16, 2019.

Around early March, it eventually brightened to magnitude 9.5 while passing by the Great Square of Pegasus low in the western sky at dusk. Perihelion took place on March 15. ATLAS Y1 is predicted to travel from Cassiopeia across Camelopardalis between April 15 to May 6.

“Although expected to fade this month, ATLAS Y1 has remained stubbornly bright. I was frankly surprised when I turned my 381 mm (15 inches) scope toward the comet on April 16, 12 UT,” King stated.

At 64x, the comet showed a strongly condensed, 3′ pale green coma and a faint tail pointing north. “I had no trouble spotting it in 10×50 binoculars,” King added.

Y1 is a circumpolar object and visible all night from mid-northern latitudes, like PanSTARRS and ATLAS Y4. The comet is expected to fade slowly as it travels from Cassiopeia through Ursa Minor, passing 6.5 degrees above Polaris on May 1 and onward to the Big Dipper. The nearest approach to Earth will be around that month.