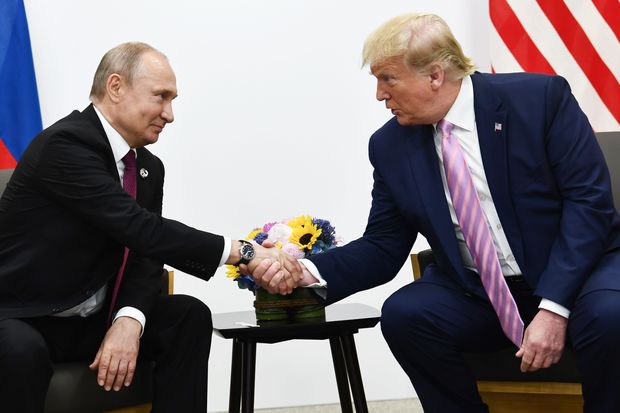 President Trump issued a symbolic joint statement Saturday with Russian President Vladimir Putin, in a move that has stirred debate within the Trump administration and spawned concern among some lawmakers on Capitol Hill, according to people familiar with the document.

The unusual declaration is intended to commemorate the 75th anniversary of a meeting between American and Soviet troops at the Elbe River on April 25, 1945.

The broader intent is to underscore how the two nations can put aside their differences for a larger purpose, according to people familiar with its drafting.

“The ‘Spirit of the Elbe’ is an example of how our countries can put aside differences, build trust, and cooperate in pursuit of a greater cause,” it states.

But the move comes as the Pentagon and State department have complained about Russia’s behavior and many officials remain deeply wary of Moscow’s intentions. A National Security Council spokesman declined to comment.

“I am sure this was a Russian initiative,” said Angela Stent, a former U.S. intelligence analyst and author of “Putin’s World,” a book on the Russian leader. “Putin wants validation from the United States that today’s Russia like the Soviet Union is a great power.”

Some lawmakers and congressional staff who had been alerted to the statement in advance privately expressed concern. Some officials within the administration have also been concerned about the decision to issue the statement, fearing that it may undercut the stern U.S. messages toward Moscow, according to a person familiar with the internal deliberations.

Joint statements commemorating Elbe day by Russian and U.S. leaders have been rare. President Obama and then Russian President Dmitry Medvedev issued such a declaration in 2010. That took place as the Obama administration was trying to “reset” relations with a new Russian leader and came shortly after the two sides had signed the New START agreement cutting long-range nuclear arms.

The U.S. has had a complicated relationship with Russia. The Pentagon has cast Russia and China as its primary adversaries and last year the U.S. withdrew from the Intermediate-range Nuclear Forces Treaty after accusing Moscow of deploying an illegal cruise missile. The Russians denied the allegation.

But at times the administration has also sought to cooperate with Moscow. Mr. Trump has spoken with Mr. Putin several times in recent weeks as the U.S. sought to end the dispute between Russia and Saudi Arabia over oil production that has aggravated the oversupply in the oil market. They also discussed the coronavirus crisis.

Russian analysts say Mr. Putin recently has tried to boost his capital with Western leaders, and particularly Mr. Trump, by showing through the oil deal that Moscow can work with the global community in times of crisis.

Earlier this month, Russia’s ambassador to the U.S. said planned ceremonies between Russian and U.S. officials to commemorate the meeting at the Elbe had been canceled due to the Coronavirus pandemic.

Mr. Putin also had invited Mr. Trump to come to Moscow for the May 9 celebration of the World War II victory, which would have been Mr. Trump’s first official visit to Russia as president. Mr. Trump eventually decided not to go and to send Robert O’Brien, his national security adviser. Russia later postponed the date of the celebration due to the coronavirus pandemic.