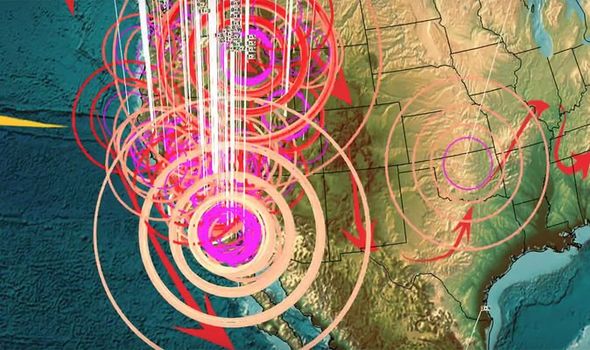 CALIFORNIA is on edge today after hundreds of mini-quakes struck the US state, just miles from the San Andreas fault line, as a leading scientist in the state made a terrifying prediction.

California suffered a huge 4.9-magnitude earthquake last night, sending strong volts across the US amid fears of an even bigger imminent mega-quake. The earthquake hit 11 miles out of its nearest town Anza, and about 22 miles south of Palm Springs. More than a hundred quakes were recorded by the US Geological Survey (USGS).

The earthquake, which was 6.6 miles deep, was felt up to 100 miles from its epicentre.

It was so strong that it was felt throughout Los Angeles and San Diego.

The earthquake struck just miles from the San Andreas fault line, one of the most dangerous fault lines in the worlds.

The Pacific Tsunami Warning Center said there was no immediate tsunami threat.

Tom Rockwell, a San Diego State University scientist who has studied the San Jacinto system, warned that “the big one” could happen tomorrow.

He said: “Could we have a big one tomorrow? Yes.

“Could it wait another 100 years? Yes. The return time is quite variable.

Weather Youtuber MrMBB333 remarked people in California “should be ready for anything, with quakes happening that close to the San Andreas fault line”.

He told viewers: “They are not big enough to do damage themselves, but they are perhaps an indicator for something bigger.

“It can precede a larger earthquake. You have to be on alert. There were aroud 104 aftershocks in this current earthquake swarm.”

Debra Hovel, a Palm Springs resident, said she “wondered if a bomb had fallen” when last night’s quake struck.

Dr Lucy Jones, from California Institute of Technology, downplayed the risk of the Big One taking place soon, tweeting: “Do not worry about the San Andreas. A M4.9 can only affect an area a few miles across.”

However, she did warn of a stronger 7-magnitude earthquake taking place, tweeting: “The San Jacinto fault itself is capable of major M≥7 quakes and the chance of a quake on the San Jacinto is now increased.”

Read More;You Don’t Say: According To USGS, The Next ‘Big One’ Could Be A Volcanic Eruption