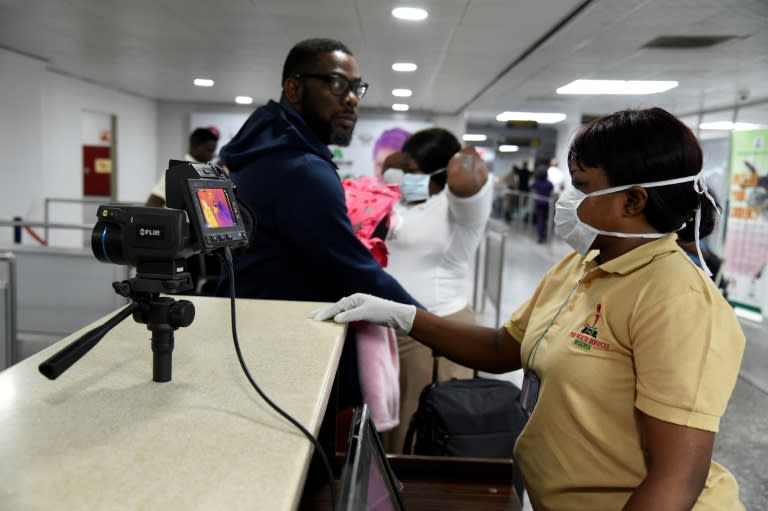 Health Minister Osagie Ehanire said in a statement overnight that the infected person was an Italian citizen who flew in from Milan, at the heart of Europe’s largest outbreak, earlier this week.

“The patient is clinically stable, with no serious symptoms,” Ehanire said, adding that he was being treated at a hospital for infectious diseases in Lagos.

The low number of cases so far across Africa, which has close economic ties with China, the epicentre of the deadly outbreak, has puzzled health specialists.

Prior to the case in Nigeria, there had been just two cases on the continent — in Egypt and Algeria.

Nigeria, Africa’s most populous country with some 190 million people, is viewed as one of the world’s most vulnerable to the spread of the virus given its weak health system and high population density.

Worried inhabitants of Lagos, a city that was hit by the West African Ebola epidemic in 2014, were already flocking to pharmacies Friday morning in search of hand sanitiser and masks.

“We are sold out for now, people came massively this morning,” a worker at a pharmacy on Lagos Island told AFP.

“Masks are scarce in town, we tried to order some and we couldn’t get them so people should use a handkerchief instead.”

One customer refused to shake hands as he said he was struggling to buy hygiene products.

“This epidemic is so scary, we should be very careful.”

The delay in the first confirmed case in sub-Saharan Africa appears to have given the region a chance to get better prepared — with more than half of the countries establishing laboratories to diagnose the virus.

But the World Health Organization (WHO) has still called for the continent “to come together to be more aggressive in attacking” the issue and said the “biggest concern” is outbreaks in countries with fragile health systems.

The West Africa region already has the bitter experience of dealing with the devastating Ebola outbreak that killed some 11,000 people from 2013 to 2016.

The disease’s arrival in Lagos in 2014 set off alarm bells across the globe and unleashed a wave of panic among residents.

In the end Lagos escaped relatively lightly and only seven people died from a total of 19 infected, with the WHO praising the fast response to curb Ebola.

Nigerian officials moved quickly Friday to reassure the population that the country was prepared to contain the spread of the new coronavirus.

“We have continued to beef our own security. The level of preparedness continues to improve of Nigeria every day,” the health minister, Ehanire, told a press conference in the capital Abuja.

Lagos state health commissioner Akin Abayomi said the infected person flew to Lagos via Istanbul on Turkish Airlines on Monday and spent a night in a hotel before heading to company offices outside the city.

“We have a very aggressive public health awareness campaign going on. We have engaged in extensive training,” he said.

The authorities have set up quarantine centres in Lagos and Abuja and there are three laboratories in the country with the capacity to diagnose the virus.

The director general of the West African Health Organisation Stanley Okolo insisted this month that the region had “learnt from the lessons of Ebola”.

He said members of the Economic Community of West African States (ECOWAS) bloc agreed recently to come up with a “regional cost plan” and estimated that up to $50 million was required.

“The devastation of an epidemic affects everybody,” he said.

Situated in a tropical regional not far from the equator, Nigeria has had to face the threat of multiple contagious diseases.

An outbreak of Lassa fever, which is spread mainly through rat faeces and urine, has killed over 100 people across the country since the start of the year.

Experts say the oil-rich economic powerhouse is better prepared to deal with any disease epidemics than some of its poorer neighbours in the region.

But the government is criticised for not spending enough on health and crumbling infrastructure, corruption and the departure of doctors to better paying jobs abroad have eaten away at the sector.