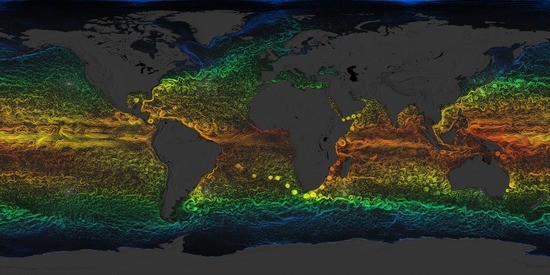 New research, published today (Feb. 6) in the journal Science Advances, finds that this acceleration is occurring around the globe, with the most noticeable effects in the tropical latitudes. The enhanced speed isn’t just at the ocean’s surface, but is occurring as deep as 6,560 feet (2,000 meters).

“The magnitude and extent of the acceleration in ocean currents we detected throughout the global ocean and to 2000-meter (6,560 foot) depth was quite surprising,” study co-author Janet Sprintall, an oceanographer at the Scripps Institution of Oceanography at the University of California, San Diego, said in a statement. “While we expected some response to the increased winds over the past two decades, that the acceleration was above and beyond that was an unexpected response that is likely due to global climate change.”

Winds over the ocean have been picking up at a rate of 1.9% per decade, the researchers found. This increase in wind speed transfers energy to the ocean’s surface, and subsequently, deeper waters. About 76% of the upper 6,560 feet (2,000 m) of the oceans have seen an increase in kinetic energy since the 1990s. Overall, ocean current speeds have crept up about 5% per decade since the early 1990s, the study found.

The study was led by Shijian Hu, an oceanographer at the Institute of Oceanology in Qingdao, China. Hu, Sprintall and their colleagues were interested in understanding global changes to ocean currents because prior research had turned up a confusing picture. For example, currents in the subtropics that transfer energy from the equator to the poles have intensified over the last century. But some major regional currents, such as the Kuroshio in the western North Pacific Ocean, show little evidence of acceleration, the researchers wrote.

So the team reanalyzed old current data and pulled new information from the Argo mission, a scientific project that uses thousands of autonomous, missile-shaped floats to gather information about ocean temperature, salinity and currents.

The speedup isn’t immediately obvious because ocean currents move slowly, study co-author Michael McPhaden, a researcher at the National Oceanic and Atmospheric Administration, told The Washington Post. For example, the South Equatorial Current in the Pacific Ocean moves only a mile an hour, so it would only speed up 0.05 mph in a decade, he said. Given the enormous amounts of water on the move, though, it takes a significant amount of energy input to create that acceleration. The changes are larger than what would be expected from natural variability, which suggests that global warming is the culprit.

There are many questions left to answer about changes in ocean circulation, Hu and his colleagues wrote in their new paper. For example, there are few observations of circulation at lower depths, so little is known about changes in the very deep oceans. Understanding changes in ocean circulation is important for understanding climate change and its effects, the researchers wrote. Ocean currents move heat around the globe, which can in turn affect ocean habitats, local weather and local temperatures.

Read More:Earth Heating From The INSIDE: Oceans Are The Warmest They’ve Ever Been