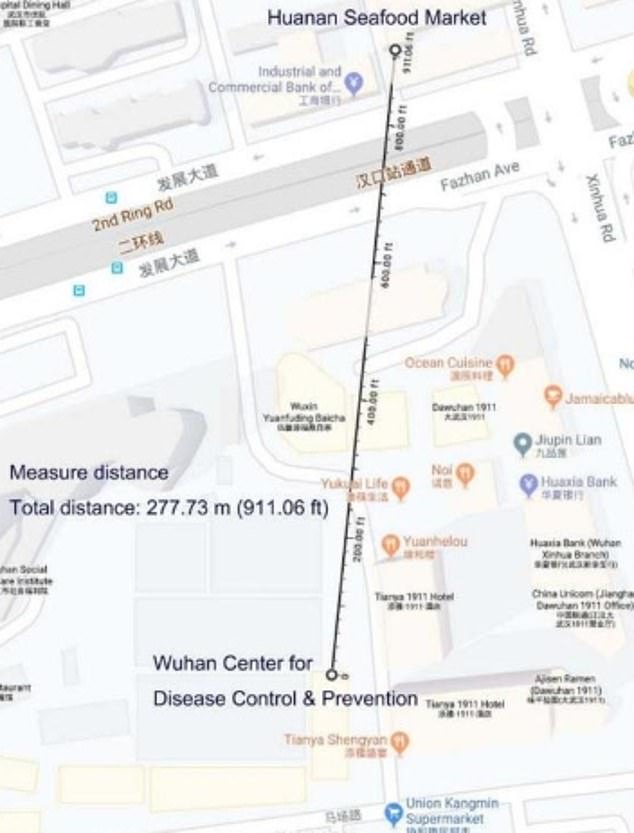 Chinese scientists believe the deadly coronavirus may have started life in a research facility just 300 yards from the Wuhan fish market.

A new bombshell paper from the Beijing-sponsored South China University of Technology says that the Wuhan Center for Disease Control (WHCDC) could have spawned the contagion in Hubei province.

It also mentions that bats – which are linked to coronavirus – once attacked a researcher and ‘blood of bat was on his skin.’

It describes how the only native bats are found around 600 miles away from the Wuhan seafood market and that the probability of bats flying from Yunnan and Zhejiang provinces was minimal.

In addition there is little to suggest the local populace eat the bats as evidenced by testimonies of 31 residents and 28 visitors.

Instead the authors point to research being carried out withing a few hundred yards at the WHCDC.

One of the researchers at the WHCDC described quarantining himself for two weeks after a bat’s blood got on his skin, according to the report. That same man also quarantined himself after a bat urinated on him

And he also mentions discovering a live tick from a bat – parasites known for their ability to pass infections through a host animal’s blood.

‘The WHCDC was also adjacent to the Union Hospital (Figure 1, bottom) where the first group of doctors were infected during this epidemic.’ The report says.

‘It is plausible that the virus leaked around and some of them contaminated the initial patients in this epidemic, though solid proofs are needed in future study.’

And as well as the WHCDC, the report suggests that the Wuhan Institute of Virology could also have leaked the virus, as has previously been reported by MailOnline.

‘This laboratory reported that the Chinese horseshoe bats were natural reservoirs for the severe acute respiratory syndrome coronavirus (SARS-CoV) which caused the 2002-3 pandemic,’ the report says.

‘The principle investigator participated in a project which generated a chimeric virus using the SARS-CoV reverse genetics system, and reported the potential for human emergence 10. A direct speculation was that SARS-CoV or its derivative might leak from the laboratory.’

The report concludes that ‘the killer coronavirus probably originated from a laboratory in Wuhan.’

It comes as the outbreak has infected more than 69,000 people globally, with 1,665 deaths in China – most of these in the central province of Hubei.

Read More:Bioweapons; At The Breaking Point Of What We Call History