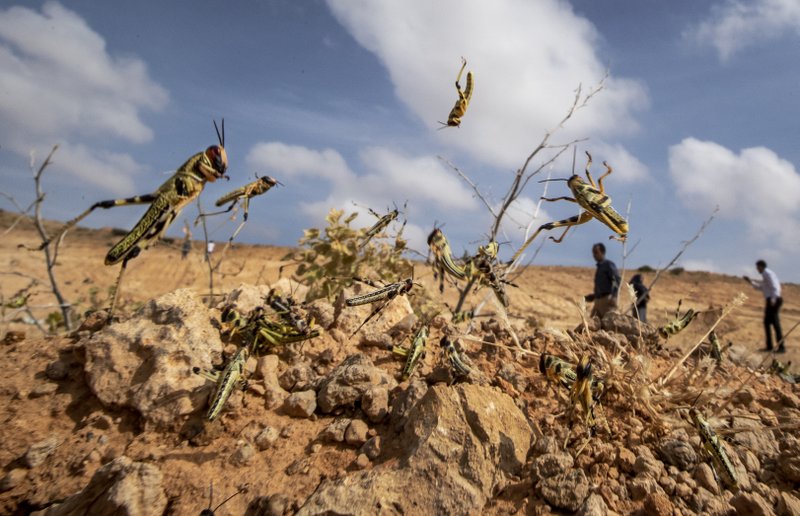 Uganda scrambled to respond to the arrival of the biggest locust outbreak that parts of East Africa have seen in decades, while the United Nations warned Monday that “we simply cannot afford another major shock” to an already vulnerable region.

An emergency government meeting hours after the locusts were spotted inside Uganda on Sunday decided to deploy military forces to help with ground-based pesticide spraying, while two planes for aerial spraying will arrive as soon as possible, a statement said. Aerial spraying is considered the only effective control.

The swarms of billions of locusts have been destroying crops in Kenya, which hasn’t seen such an outbreak in 70 years, as well as Somalia and Ethiopia, which haven’t seen this in a quarter-century. The insects have exploited favorable wet conditions after unusually heavy rains, and experts say climate change is expected to bring more of the same.

Keith Cressman, the U.N. Food and Agriculture Organizations senior locust forecasting officer, said Kenya has received “waves and waves of swarms” since the beginning of the year from the Horn of Africa, and “over the weekend they moved on the side of Mount Kilimanjaro across the border into Tanzania.”

“Also over the weekend they moved into northeastern Uganda,” he told a news conference at U.N. headquarters in New York. “We’re expecting any day they will move across the border into the southeast corner of South Sudan,” where another several million people face hunger as the country struggles to emerge from civil war.

U.N. officials warn that immediate action is needed before more rainfall in the weeks ahead brings fresh vegetation to feed new generations of locusts. If left unchecked, their numbers could grow up to 500 times before drier weather arrives, they say.

“There is the risk of a catastrophe,” U.N. humanitarian chief Mark Lowcock told a briefing in New York on Monday, warning that 13 million people already face severe food insecurity — 10 million in places affected by locusts — and the region can’t afford another jolt.

Dominique Burgeon, the FAO’s emergency and resilience director, warned at the U.N. briefing that another 20 million people in the region are in danger of becoming food insecure.

Without enough aerial spraying to stop the swarms, the locust outbreak could turn into a plague, “and when you have a plague, it takes years to control,” Burgeon told The Associated Press last week.

The U.N. has asked for $76 million in immediate aid. So far just under $20 million is in hand, including $10 million released by Lowcock from the U.N. emergency relief fund and $3.8 million from FAO, officials said. The United States said Monday it has released $800,000 and the European Union has released 1 million euros.

“The response today is not gonna work, unless there’s a big scale-up,” Lowcock said.

The locusts are eating the vegetation that supports vibrant herder communities in the region, and Kenyan Ambassador Lazarus Amayo warned of the “inherent risk of communal conflict over pastures.”

The outbreak is so severe it might even disrupt the planting of crops in the coming weeks, he said, adding that the locusts “do wanton damage.”

Read More:This Is Happening Around The Globe: Sinkhole Spewing Fire Discovered In China

Read More:Waters Made Bitter: Pacific Ocean Is Becoming So Acidic That Crab Shells Are Dissolving