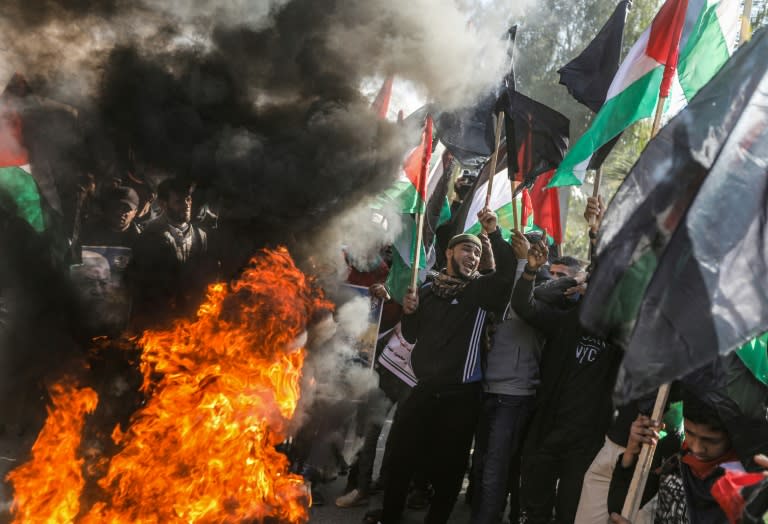 Ramallah (Palestinian Territories) (AFP) – Palestinians staged protests Tuesday against US President Donald Trump’s Middle East peace plan, hours before it was to be unveiled in Washington.

Thousands demonstrated in Gaza, burning pictures of Trump and the American flag, while further rallies were planned for the coming days.

Details of the initiative remained under wraps, but the Palestinians fear it will heavily favour Israel, whose Prime Minister Benjamin Netanyahu was to attend the White House unveiling.

Rightwing Israeli settlers, for their part, also raised concern, fearing the initiative would support the formation of a Palestinian state.

In a rare event, rival Palestinian factions Hamas and Fatah agreed to meet in the West Bank city of Ramallah to discuss a response to Trump.

The Islamist rulers of Gaza have been at odds with president Mahmud Abbas’s mainstream Fatah movement for years, with Hamas rarely taking part in meetings of the West Bank-based Palestinian leadership.

Trump was due to release his plan, in preparation since 2017, at the White House together with his close ally Netanyahu, who is battling corruption charges which he denies and campaigning for March 2 elections.

The Palestinians, who accuse Trump of pro-Israel bias after his administration has unwaveringly backed Israeli objectives, were not talking part in the Washington event.

And Trump’s vision of peace is almost certainly a non-starter for most Palestinians, including those in the Jordan Valley, a strategically vital area that constitutes around 30 percent of the West Bank.

Trump’s plan may seek to give Israel the green light from Washington to annex the Jordan Valley, which is home to around 65,000 Palestinians, according to the Israeli anti-occupation NGO B’Tselem.

Yasser Heliyel, who was picking aubergines near the Jordan Valley settlement of Yafit on Tuesday, said an Israeli annexation move would threaten his livelihood.

Heliyel, like others in the area, works without permits on Israeli-owned farms, where pay is higher.

If the Israeli government officially declared the territory part of its state, it might require everyone to apply for permits.

“If permits were needed it would become a problem. A big problem,” Heliyel told AFP.

He added that Palestinian labourers would resent applying for permission to work on land they consider theirs.

A major Palestinian protest has been called in the Jordan Valley town on Wednesday.

The Israeli army announced it was beefing up forces in the area ahead of Trump’s announcement, with Defence Minister Naftali Bennett pledging the military was “ready for any scenario.”

In the Jordan Valley town of Zbeidat, 80-year-old mayor Ismail Zbeidat said he was not overly concerned about Trump’s announcement.

The US leader was likely unveiling a staunchly pro-Israeli plan to help his ally Netanyahu’s election prospects, Zbeidat told AFP.

“God willing nothing will happen. This is all talk for the Israeli elections,” he said, sitting on a plastic chair in the rundown town of around 2,000 people.

“People will not leave,” he added. “Neither the deal nor Netanyahu can make them.”

Rightwing Jewish settlers had initially been upbeat about Trump’s proposals.

But after being briefed on the plan by US officials, leaders of the Yesha Council umbrella group that represents settlers living in the West Bank said they were now “very concerned”.

“We can’t agree to a plan that includes forming a Palestinian state, which will constitute a threat to Israel and a great danger to the future,” said council head David Elhayani.

Israeli Transport Minister Bezalel Smotrich of the far-right Yemina union stressed in an interview with army radio that his party “won’t under any conditions agree to recognition, whether explicit or implicit, of a Palestinian state”.

Read More:Who’s Occupying Who? Let’s Look At The Original Land Grant Of Israel To Abraham

Read More:What Does The Bible Say About The Peace Plan Proposed By Trump White House?