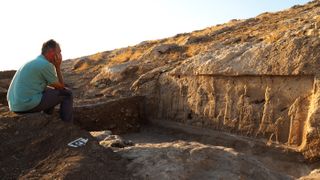 Stunning ancient rock carvings that portray an Assyrian king paying homage to his gods amid a procession of mythical animals have been unearthed in the Kurdistan region in the north of Iraq, after being hidden for several years to prevent damage by the Islamic State militant group (ISIS).

The Assyrian carvings, which are almost 3,000 years old, were uncovered late last year by Italian and Iraqi archaeologists in the Faida district, south of the city of Duhok, about 300 miles (480 kilometers) north of Baghdad, according to the University of Udine in Italy.

It’s the first time in almost 200 years that any comparable Assyrian rock carvings have been found, and the discovery is thought to highlight an ancient period of expansion in the Assyrian Empire.

With the exception of the carvings at the archaeological site of Khinnis, discovered near the city of Mosul in 1845, “there is no other Assyrian rock art complex that can be compared with Faida,” said archaeologist Daniele Morandi Bonacossi of the University of Udine.

Morandi Bonacossi leads the excavations at Faida for the university’s Land of Nineveh Archaeological Project, in collaboration with archaeologists from the Duhok Directorate of Antiquities led by Hassan Ahmed Qasim.

The carvings were first seen in the 1970s, and surveys of the site began in 2012, he said. But the archaeological work had to be abandoned and hidden when ISIS became active in the region and captured nearby Mosul in 2014.

As a result, archaeologists were only able to return and start a full scientific excavation of the site in 2019, after ISIS was driven out of the region, he said.

So far, the archaeologists have unearthed 10 panels of intricate carvings in bedrock above what was once an ancient canal. Like the famous Assyrian carvings at Khinnis, these are sculpted as reliefs, with the prominent figures raised from a solid background.

Built during the eighth century B.C., the 4-mile-long (6.5 km) canal carried water to farmland in the Faida district, but it was filled in long ago.

Each panel shows a procession of the seven main ancient Assyrian gods and goddesses, who are standing or sitting atop striding dragons, lions, bulls and horses.

“The deities can be identified as Ashur, the main Assyrian god, on a dragon and a horned lion; his wife Mullissu sitting on a decorated throne supported by a lion; [and] the moon god Sin on a horned lion,” he said.

The procession also shows the Assyrian god of wisdom mounted on a dragon, the sun god Shamash on a horse, the weather god Adad on a horned lion and a bull, and Ishtar, the goddess of love and war, on a lion.

All the gods and goddesses are facing in the direction of the water that would have been flowing in the canal beneath them, he said.

The Assyrian king Sargon — a namesake of the much earlier Mesopotamian king Sargon the Great — appears twice in each of the carved panels, once at each end, he said.

Morandi Bonacossi said that the Faida canal appears to have been built by Assyrian king Sargon for local irrigation, but it became part of a much larger canal network established by Sennacherib.

Sargon, who ruled from 722 B.C. until 705 B.C., is mentioned in the Hebrew Bible, where he is said to have defeated the Kingdom of Israel in an invasion. He was the father of his successor Sennacherib, who ruled until 681 B.C. and rebuilt the ancient city of Nineveh alongside the Tigris River, on the outskirts of modern Mosul.

“These irrigation networks with their associated monuments were part of highly structured, centrally planned and elite-sponsored programs that engineered the landscape of the Assyrian core,” he said.

Vandalism, looting and urban expansion — including the construction of a modern aqueduct nearby — now threaten the Faida archaeological site; it is now the subject of a salvage project to document the carvings, protect them and create an archaeological park nearby.

Read More:Annunaki, Fallen Angels- History As It REALLY Is