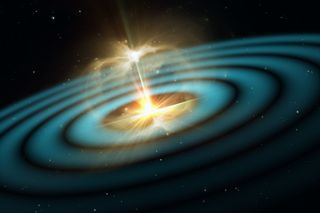 A mysterious cosmic event might have ever-so-slightly stretched and squeezed our planet last week. On Jan. 14, astronomers detected a split-second burst of gravitational waves, distortions in space-time … but researchers don’t know where this burst came from.

The gravitational wave signal, picked up by the Laser Interferometer Gravitational-Wave Observatory (LIGO) and the Virgo interferometer, lasted only 14 milliseconds, and astronomers haven’t yet been able to pinpoint the burst’s cause or determine whether it was just a blip in the detectors.

Gravitational waves can be caused by the collision of massive objects, such as two black holes or two neutron stars. Astronomers detected such gravitational waves from a neutron star collision in 2017 and from one in April of 2019, according to new findings that were presented at the meeting of the American Astronomical Society on Jan. 6.

But gravitational waves from collisions of such massive objects typically last longer and manifest in the data as a series of waves that change in frequency over time as the two orbiting objects move closer to each other, said Andy Howell, a staff scientist at Los Cumbres Observatory Global Telescope Network and an adjunct faculty member in physics at the University of California, Santa Barbara. He was not part of the LIGO research.

This new signal was not a series of waves but a burst, Howell said. One more likely possibility is that this short-lived burst of gravitational waves comes from a more transient event, such as a supernova explosion, the catastrophic ending to a star’s life.

Indeed, some astronomers have hypothesized that this could have been a signal from the Betelgeuse star, which mysteriously dimmed recently and is expected to undergo a supernova explosion. But the Betelgeuse star is still there so it’s not that scenario, Howell said. It’s also unlikely to be another supernova because they happen in our galaxy only about once every 100 years, he added.

What’s more, the burst still “seems a little too short for what we expect from the collapse of a massive star,” he said. “On the other hand, we’ve never seen a star blowing up in gravitational waves before, so we don’t really know what it would look like.” In addition, the astronomers didn’t detect any neutrinos, tiny subatomic particles that carry no charge, which supernovas are known to release.

Another possibility is that the merging of two intermediate-mass black holes caused the signal, Howell said. Merging neutron stars produce waves that last longer (around 30 seconds) than this new signal, while merging black holes might more closely resemble bursts (that last around a couple of seconds). However, intermediate black hole mergers might also release a series of waves that change in frequency.

LIGO came across this signal while specifically looking for such bursts. But “that doesn’t mean that what it found is an intermediate-mass black hole merger,” Howell told Live Science. “We don’t know what they found,” especially since LIGO hasn’t yet released the exact structure of the signal, he added.

It’s also possible that this signal was just noise in the data from the detector, Howell said. But this burst of gravitational waves was found by all three LIGO detectors: one in Washington state, one in Louisiana and one in Italy. So the probability of the LIGO detectors finding this signal by chance (meaning it’s a false alarm) is once every 25.84 years, which “gives us some indication that this is a pretty good signal,” Howell said.

There could be other explanations for this mysterious burst, too. For example, a supernova could have directly collapsed into a black hole without producing neutrinos, though such an occurrence is very speculative, Howell said. Astronomers are now pointing their telescopes to that region to try to pinpoint the source of the waves.

“The universe always surprises us,” he added. “There could be totally new astronomical events out there that produce gravitational waves that we haven’t really thought about.”

Read More:Two New Gravitational Waves Discovered In One Day: What Is So Massive It Is Rippling Space-Time?

Read More:Gravitational Waves Suggest The Fabric Of Reality Is Laced Together With Cosmic Strings

Read More:Ripples In Space-Time Could Reveal The Shape Of Wormholes