A 3.8 magnitude earthquake was felt in East Tennessee on Monday afternoon, January 20, 2020.

The quake hit at 2:12 p.m. (EST) or 1:12 p.m. (CST) in Campbell County and rattled people, homes and windows for a few seconds all across East Tennessee. Loud booms have also been reported across the area.

Just an hour or two after I wrote an article about an imminent earthquake in either New Madrid, Wabash Valley Fault or along the Eastern Tennessee Seismic Zone, a M3.8 quake rattled people in East Tennessee. There was a smaller earthquake, a 2.8 magnitude, reported in that same location on Sunday. 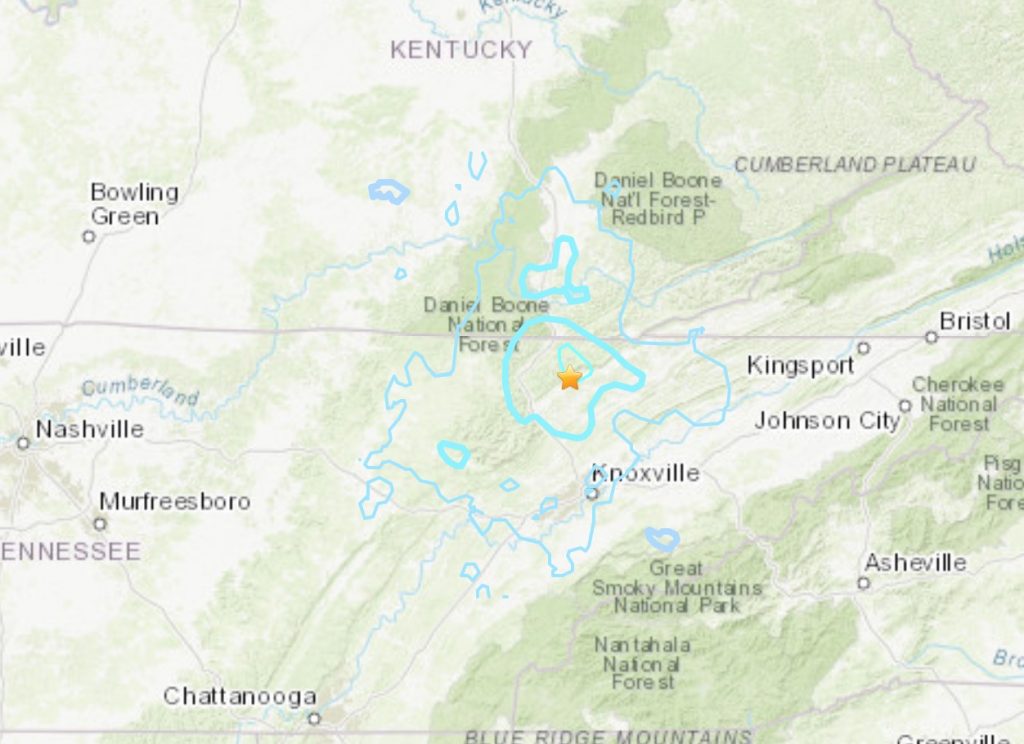 This can be qualified as a ‘strong’ quake for the region. The latest indeed tied for the seventh strongest earthquakes in East Tennessee in more than a century:

Meanwhile, a bit more than 10 hours after the big shaking, more than 10,000 people have reported feeling the tremor on the USGS homepage. Pretty impressive number, isn’t it?

The small quake rumbled for a few seconds and was felt several tens of miles away of the epicenter, located 1km E of Fincastle, Tennessee.

And loud earthquake booms and rumblings have been reported:

“I was inside. It Sounded like a train getting closer. I felt like a train that was directly outside of my house. Suddenly I heard a big boom like it hit something. & it was over. Lasted maybe 15-20 seconds.“

“Heard a loud deep rumble and then my doors and cabinets started rattling. Definitely took me by surprise and was a little frightening.“

“The dogs started barking. It sounded like loud rumbling, the house was vibrating much more than if it had been a train or plane close by, and items hanging on the walls were shaking and making noise as they bounced off the walls. I noticed that noise before I realized the rumble was too strong for traffic/trains/etc.“

“My wife said she thought something hit the house, and that the floor moved underneath her.“

“We were upstairs at the time. My daughter was in her room. She felt significant shaking, heard cracking and popping, her light fixture was swinging, and her TV shook. My sister was in the bathroom. She heard a rumble sound, and felt a slight shaking and saw the mirror shake. I was in the central hallway, which is also our sitting room. I felt significant shaking, heard a low rumble, and the windows rattled somewhat noisily.“

The East Tennessee Seismic Zone (ETSZ) stretches from northeastern Alabama to southwestern Virginia and is one of the most active earthquake zones in the eastern United States.

However, most earthquakes in the Southern Appalachian Seismic Zone are small and are detected only with instruments. Earthquakes large enough to be felt, similar to yesterday’s quake, occur approximately once a year in the ETSZ.

The USGS estimates that earthquakes as large as magnitude 7.5 are possible in the ETSZ and that events of M5–M6 occur once every 200 to 300 years.

Monday’s earthquake felt around East Tennessee and southern Kentucky didn’t produce significant damage or injury. It was the second earthquake to hit the area in 24 hours after a M2.8 tremor hit on Sunday.

Always be ready for the Big one in this area. If it’s not from the East Tennessee Seismic Zone, it will be from the New Madrid. Find similar headlines on Strange Sounds and Steve Quayle. [USGS, WBIR]