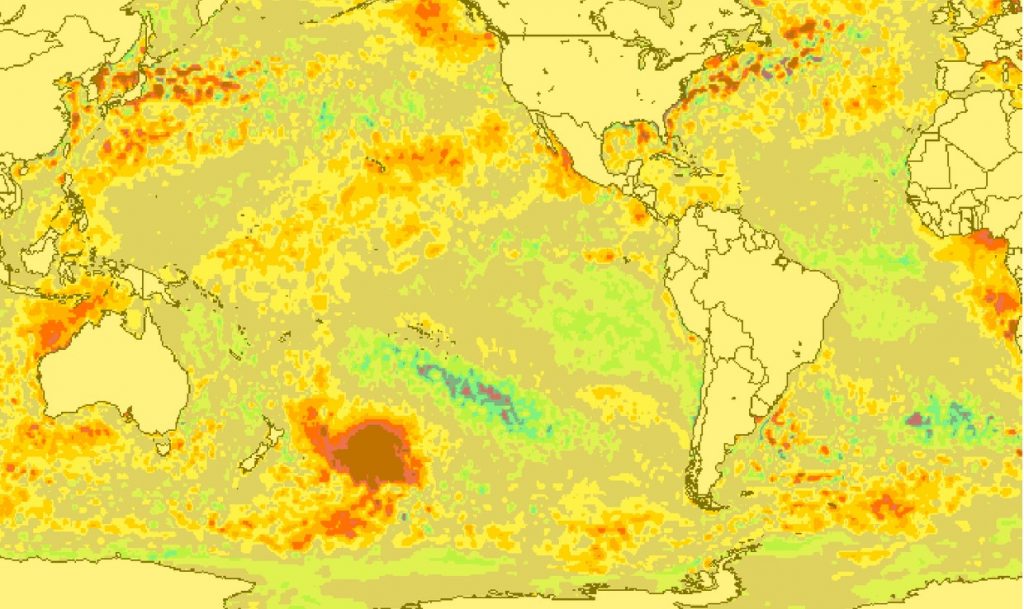 That strange area of water in the Pacific Ocean off New Zealand is 6°C hotter than normal, possibly due to a lack of wind in the region.

Similar to the blob in 2014 that devastated marine life and coral along the Pacific Northwest, there is a similar unknown phenomenon off New Zealand producing a spike in water temperature of up to 6°C above average across a massive patch of ocean east of New Zealand.

The deep red blob appears as a patch spanning at least a million square kilometers – nearly 1.5x the size of Texas, or 4x the size of New Zealand – in the Pacific Ocean.

According to leading scientists, the scale of the temperature spike near the sparsely populated Chatham Islands archipelago was remarkable, and had been building for weeks.

It’s the biggest patch of above average warming on the planet right now with normal temperatures reaching about 15°C. But at the moment they are about 20°C.

How did is the hot blob off New Zealand form?

Scientists say the strange phenomenon is due to strong high pressure system and a lack of wind. But it is not linked to climate change.

It is indeed not uncommon to see patches of warmer water off New Zealand. However, this magnitude of four, five, up to six degrees is pretty unusual.

Maybe it is a very thin layer of ocean that has warmed up and there hasn’t been any wind to cool it for several weeks?

Anti-cyclones form when a mass of air cools, contracts and becomes more dense, increasing the weight of the atmosphere and the surface air pressure.

What are the consequences of a hot blob?

A surge in ocean heat over a short period could be difficult for local marine life if it penetrated far beyond the surface. Ocean temperatures are less prone to sharp changes than those on land due to the amount of energy required to warm an area of water.

Scientists will start investigating the strange spike in temperature and the phenomenon behind in the next few weeks. These first results will also give more insight into its cause and its local impact.

Two summers ago, a marine heat wave (about 3°C above average) in New Zealand’s waters led to tropical fish from Australia being found along the country’s coast. And more scary, another heat anomaly is spreading along the Pacific Northwest again, and this new heat phenomenon – with some help from Fukushima – may have badly hit the Alaskan cod. For more headlines follow Strange Sounds and Steve Quayle.

Read More:We Are So Close: Giant ‘Lava Blobs’ Under The Pacific Have Scientists Puzzled

Read More:Warm Ocean ‘Blobs’ Like The One In The Pacific Could Become The New Normal- But Why? Earth Is Heating From The Inside