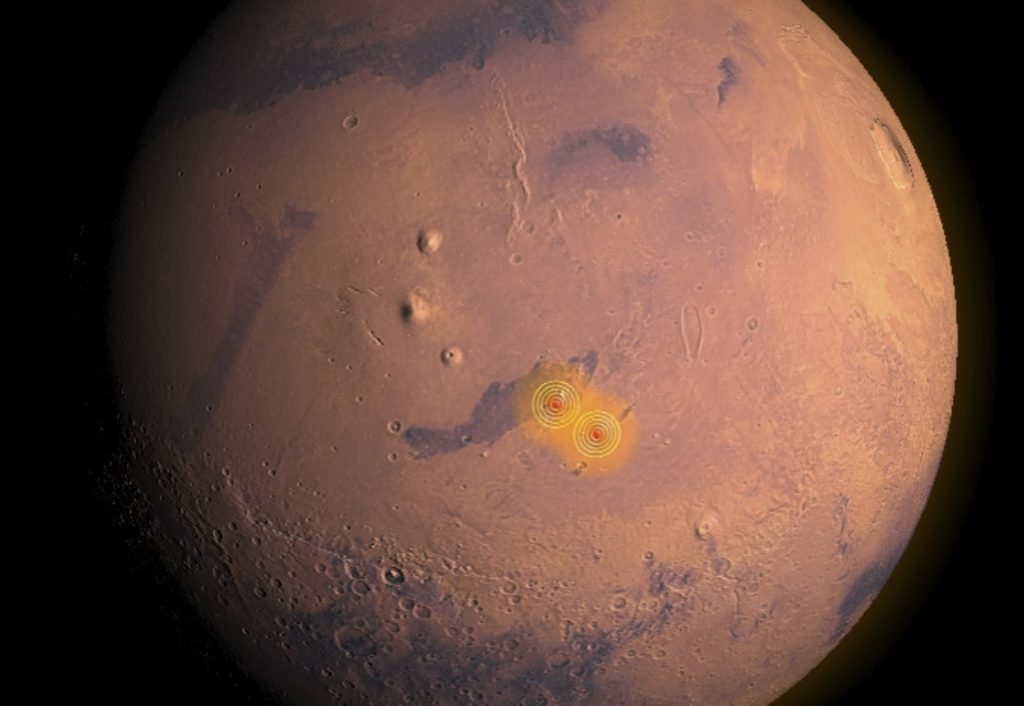 Rumbling quakes on the red planet have been traced back to Cerberus Fossae.

This suggests this geologically young region is still alive and cracking.

Back in April 2019, the first first earthquake on Mars was heard by NASA’s InSight, showing that the Red Planet is shaking and rumbling. Now, based on the the analysis of the seismic signals, scientitsts were able to detect the very first activ fault zone on Mars: Cerberus Fossae.

Known as marsquakes, the events clocked in between magnitude 3 and 4, according to data from NASA’s InSight lander presented at during a recent AGU conference.

While the two quakes are small by Earth standards, they’re among the largest yet detected on Mars.

InSight detected its first seismic rumble from the planet’s interior, rather than its noisy surface, on April 6, 2019. Since that time, temblors have been happening with increasing frequency — with more than 300 yet detected. But more monitoring is necessary to figure out why.

Scientists were able to trace both quakes to an area known as Cerberus Fossae, a series of deep gashes that lingers some 994 miles to the east of InSight’s landing zone.

The activity could point to a potentially useful source of geothermal energy on Mars. The seismic shaking might pose an issue for sensitive scientific instrumentation.

The results from this work are pending publication in a peer-reviewed journal, and scientists within the project declined to comment until after the study’s release.

What Is Causing the MarsQuakes?

Scientists are also unsure what mechanism is causing the various internal rumbles on Mars.

On Earth, quakes frequently come from the never-ending movement of tectonic plates as they jockey for position. This geologic dance builds up stress in our planet’s crust that occasionally hits a breaking point. When this happens, the land can suddenly shift, sending out a jolt in the form of an earthquake.

Mars, however, doesn’t have plate tectonics. After its formation, the planet was a searing mass of molten rock that eventually cooled to form a static crust around a rocky mantle, yet it’s unclear how hot the planet’s insides are today.

While volcanoes once gushed lava at its surface, they have long since fallen silent. But scientists suspect that pockets of magma might still linger below, since its stationary crust may act like a lid on a steaming cup of coffee, retaining heat from the planet’s formation.

In that case, some marsquakes might be due to the rocky planet’s ongoing cooling and contraction. This compression could crack the surface in so-called thrust faults, in which one block of land is shoved atop another. Still others might come from magma or water squishing through the Martian subsurface.

What exactly is causing the latest activity at Cerberus Fossae is uncertain, but the region’s history provides some clues.

The detected seismic events might suggest that the crack formation is still ongoing. Anyhow, the quakes show that Cerberus Fossae isn’t dead and with that Mars has just become a bit more alive to us. Get more headlines on Strange Sounds and Steve Quayle.