Within the last 12 hours, 4 earthquakes hit off Oregon’s Coast – 2 along the Blanco fracture zone and 2 on the Gorda Plate.

Cascadia is heating up! 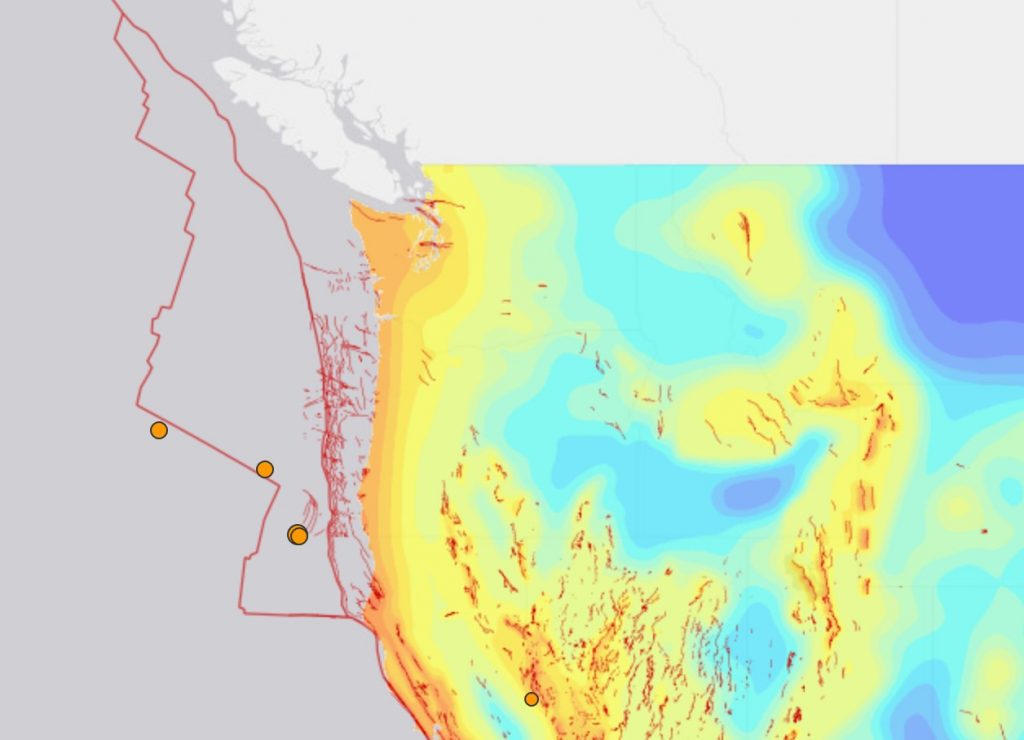 The Cascadia subduction Zone is currently releasing lots of pressure on its upper end. And now, quakes start quicking off near the lower end of the same Cascadia along the Blanco Fracture Zone and on the Gorda Plate.

The Gorda Plate and the Juan de Fuca Plate are two oceanic plates, subducting underneath the North American Plate in what is known as the Cascadia Subduction Zone.

The Blanco Fracture Zone is a nice transform fault zone that’s a bit like the San Andreas, only underwater. It forms the boundary between the Juan de Fuca and Pacific plates, and is around 200 kilometers west of the Cascadia subduction zone… Not so far…

As shown on the map above, within the last 12 hours, the Blanco Fracture Zone and the Gorda Plate were hit by 2 very shallow earthquakes, respectively:

Animation of Cascadia Earthquakes from 1979 to 2019

The widely-felt M6.3 earthquake of August 29, 2019 on the Blanco Fracture Zone was only the most recent of many moderate-size earthquakes to strike this region off of the Oregon coast.

As this animation shows, such earthquakes are common along the boundaries of the Juan de Fuca plate with the Pacific Plate, which also includes the Juan de Fuca Ridge, the Gorda Ridge, and the Mendocino Fracture Zone.

Fortunately these events rarely pose a tsunami hazard since the largest of these earthquakes tend to have strike-slip mechanisms that move the seafloor mostly sideways with little disruption to the ocean above.

The Juan de Fuca Plate meets the North American Plate, however, with a very different sort of plate boundary: a subduction zone.

This plate boundary can produce megathrust earthquakes with large vertical motions that cause devastating tsunamis.

It has been more than 300 years since the last time the Cascadia Subduction Zone generated such destruction, on January 26, 1700.

This subduction zone also created the volcanoes of the High Cascades, stretching from northern California into southern British Columbia.

To put the recent earthquake in context this animation begins 40 years earlier, in 1979. In that time frame 10 earthquake of M6.0 or larger occurred on the Blanco FZ and more than a dozen along the Mendocino FZ, some with M7.0 or larger.

The fracture zones off of Vancouver Island have also produced numerous earthquakes larger the M6.0, with one as large at M6.8.

The largest earthquake on the Cascadia Subduction Zone in the last 40 years was the M6.8 Nisqually Earthquake in southern Puget Sound on February 28, 2001.

As the area covered by the animation extends over North America, it also includes activity unrelated to Cascadia, such as the October 28, 1983, M6.9 southern Idaho earthquake and numerous small events associated with the Yellowstone Caldera.