Not every lightning is the same.

Scientists have observed mega-strikes of lightning that carry 1,000 times more energy than ordinary bolts. They’re so intense that, about four decades ago, a scientist had to coin a new word to describe them: Superbolts! 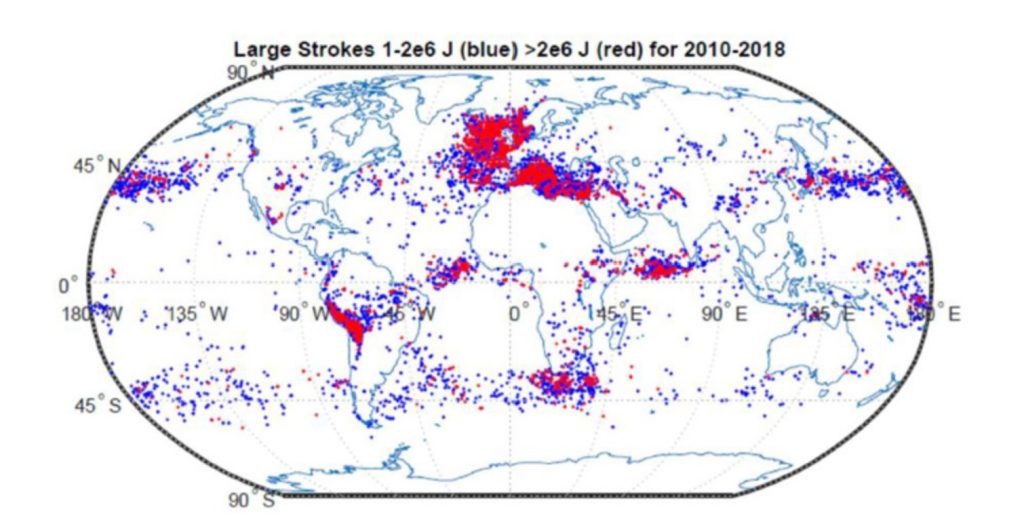 There are different types of lightnings and different places where they concentrate. One of the most impressive show is a natural phenomenon called the Catatumbo Lightning in Venezuela. According to a new research paper, some extremely powerful bolts exist. Nobody knows how these mega-bolts amass so much energy and why they don’t strike equally everywhere.

Where do Superbolts Strike?

Superbolts can strike almost anywhere. But they seem to strike mostly at sea.

As shown on the map below, the mega-strikes develop most often over the North Atlantic Ocean and the Mediterranean Sea.

The Andes Mountains, in South America, had more superbolt strikes than other nearby areas.

Another broad band of superbolt activity stretches across the Northern Pacific Ocean, east of Japan.

The results also show that mega-lightnings don’t occur at the same rate throughout the year.

The largest number hit the northern hemisphere during winter and very few strike from April to October.

What Are The Biggest Surprises?

We know that in tropical and subtropical regions, lightning activity is frequent. But for superbolts, it looks totally different. They mostly develop in the high-latitude regions, such as the North Atlantic.

Moreover, eight in every 10 superbolts each year strike over the open ocean. In other words, lightning strikes over the oceans have more energy than those over land. But scientists don’t know why.

The superbolt lightning data were recorded by the World Wide Lightning Location Network (WWLLN). Data of more than 2 billion superbolts of lightning, that struck between 2010 and 2018, were analysed for this new study.
Original Article:https://strangesounds.org/2019/12/superbolt-lightning-strikes-map.html
Read More:Electric Universe: Venezuelan Lightning Storm Last 160 Days, 10 Hours Each Night In The Same Place
Read More:Sharp Spike In Lightning Deaths Prompts Investigation In Odisha; What Is Causing The Electrical Changes In Our Atmosphere?
Read More:More Correlation Between Changes In The Earth’s Core And Electromagnetic Changes In Our Atmosphere: 109,000 Lightning Strikes In One Day Preceding Volcanic Eruption