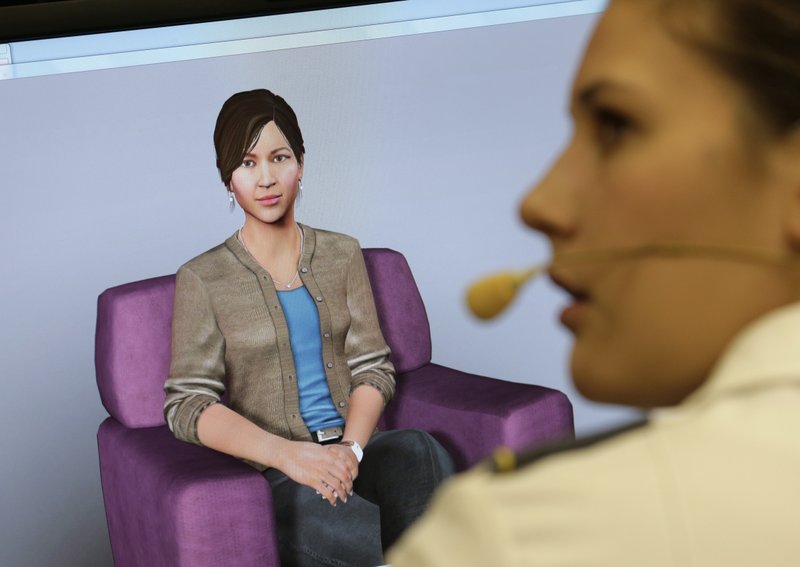 The next time you get sick, your care may involve a form of the technology people use to navigate road trips or pick the right vacuum cleaner online.

Artificial intelligence is spreading into health care, often as software or a computer program capable of learning from large amounts of data and making predictions to guide care or help patients.

It already detects an eye disease tied to diabetes and does other behind-the-scenes work like helping doctors interpret MRI scans and other imaging tests for some forms of cancer.

Now, parts of the health system are starting to use it directly with patients. During some clinic and telemedicine appointments, AI-powered software asks patients initial questions about their symptoms that physicians or nurses normally pose.

And an AI program featuring a talking image of the Greek philosopher Aristotle is starting to help University of Southern California students cope with stress.

Researchers say this push into medicine is at an early stage, but they expect the technology to grow by helping people stay healthy, assisting doctors with tasks and doing more behind-the-scenes work. They also think patients will get used to AI in their care just like they’ve gotten accustomed to using the technology when they travel or shop.

But they say there are limits. Even the most advanced software has yet to master important parts of care like a doctor’s ability to feel compassion or use common sense.

“Our mission isn’t to replace human beings where only human beings can do the job,” said University of Southern California research professor Albert Rizzo.

Rizzo and his team have been working on a program that uses AI and a virtual reality character named “Ellie” that was originally designed to determine whether veterans returning from a deployment might need therapy.

Ellie appears on computer monitors and leads a person through initial questions. Ellie makes eye contact, nods and uses hand gestures like a human therapist. It even pauses if the person gives a short answer, to push them to say more.

“After the first or second question, you kind of forget that it’s a robot,” said Cheyenne Quilter, a West Point cadet helping to test the program.

Ellie does not diagnose or treat. Instead, human therapists used recordings of its sessions to help determine what the patient might need.

“This is not AI trying to be your therapist,” said another researcher, Gale Lucas. “This is AI trying to predict who is most likely to be suffering.”

The team that developed Ellie also has put together a newer AI-based program to help students manage stress and stay healthy.

Ask Ari is making its debut at USC this semester to give students easy access to advice on dealing with loneliness, getting better sleep or handling other complications that crop up in college life.

Ari does not replace a therapist, but its designers say it will connect students through their phones or laptops to reliable help whenever they need it

USC senior Jason Lewis didn’t think the program would have much for him when he helped test it because he wasn’t seeking counseling. But he found that Ari covered many topics he could relate to, including information on how social media affects people.

“Everybody thinks they are alone in their thoughts and problems,” he said. “Ari definitely counters that isolation.”

Aside from addressing mental health needs, artificial intelligence also is at work in more common forms of medicine.

The tech company AdviNOW Medical and 98point6, which provides treatment through secure text messaging, both use artificial intelligence to question patients at the beginning of an appointment.

AdviNOW CEO James Bates said their AI program decides what questions to ask and what information it needs. It passes that information and a suggested diagnosis to a physician who then treats the patient remotely through telemedicine.

The company currently uses the technology in a handful of Safeway and Albertsons grocery store clinics in Arizona and Idaho. But it expects to expand to about 1,000 clinics by the end of next year.

Eventually, the company wants to have AI diagnose and treat some minor illnesses, Bates said

Researchers say much of AI’s potential for medicine lies in what it can do behind the scenes by examining large amounts of data or images to spot problems or predict how a disease will develop, sometimes quicker than a doctor.

Future uses might include programs like one that hospitals currently use to tell doctors which patients are more likely to get sepsis, said Darren Dworkin, chief information officer at California’s Cedars-Sinai medical center. Those warnings can help doctors prevent the deadly illness or treat it quickly.

“It’s basically that little tap on the shoulder that we all want to get of, ‘Hey, perhaps you should look over here,’” Dworkin said.

Dr. Eric Topol predicts in his book “Deep Medicine” that artificial intelligence will change medicine, in part by freeing doctors to spend more time with patients. But he also notes that the technology will not take over care.

Even the most advanced program cannot replicate empathy, Topol said. Patients stick to their treatment and prescriptions more and do better if they know their doctor is pulling for them.

Artificial intelligence also can’t process everything a doctor considers when deciding on treatment, noted Harvard Medical School’s Dr. Isaac Kohane. That might include a patient’s tolerance for pain or the desire to live a few more months to attend a child’s wedding or graduation.

“Good doctors are the ones who understand us and our goals as human beings,” he said.

Read More:Trusting Robots: Soon Robots Will Be In Control In Human Life Or Death Situations- Are We Ready?