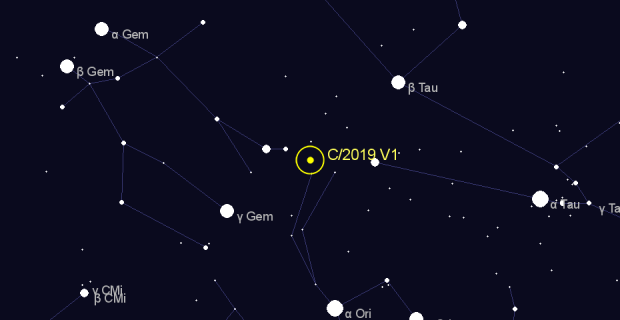 While NASA is not able to track down Near-Earth Objects (NEOs) less than a few days before they whizz past Earth, an amateur astronomer has just discovered a new comet… from his garden!

And this is just the ninth stellar object amateur astronomer Borisov has discovered.

The new comet, a resident of our solar system, travels at roughly 30km per second in the patch of sky between the Lynx and Cancer constellations.

The Crimean astronomer explains: “I discovered a new comet in early November. I have just received a letter from the Minor Planet Center of the International Astronomical Union. This is not an interstellar comet. It’s an ordinary one, which is a solar system object. It got the name C2019V1 (Borisov). This is a confirmed discovery.”

Borisov and the Interstellar Comet 2I/Borisov

Borisov was officially the first person in the world to discover an interstellar comet on August 30, 2019.

His detection allowed scientists to run a battery of tests on the interstellar visitor. In late October, astronomers announced that they had detected water on the body from an alien star system.

The hugely significant finding would indicate that water-rich comets are not unique to the solar system and that the universe is likely to contain other Earth-like worlds with the potential to support life.

And this new discovery also shows that we know almost nothing about the different unknown celestial objects that are flying at tremendeous speeds around planet Earth.