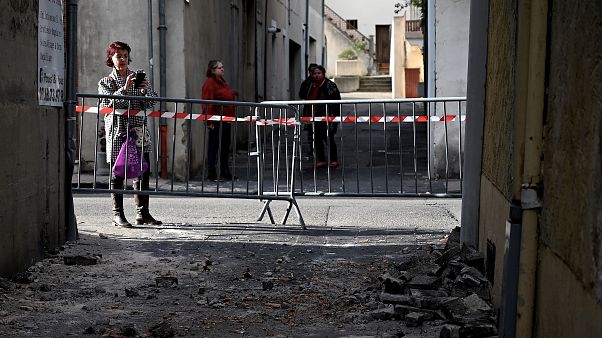 Four people have been injured in an earthquake of rare intensity in France, which was felt from Lyon to Montpellier.

The quake, which didn’t cause any major damage, was magnitude 5.4 and struck just before noon in the Ardèche region, in the southeast of the country, the French Central Seismological Office (BCSF) in Strasbourg said in a statement.

It was felt mainly in the Drôme and Ardèche regions, particularly around Montélimar where a person was seriously injured by falling scaffolding.

Three other people were slightly injured in the Ardèche “following a panic attack”, the Drôme prefecture said on Twitter.

Montelimar’s mayor, Franck Reynier, urged residents not to overload the emergency services with calls, adding: “We will keep you informed as we go along.” He has been tweeting safety measures, and reported a crack in a building, and a fallen chimney.

‘Everything shook around me’

“It lasted five seconds, everything shook around me, the furniture, the walls, as if an airplane had crashed 800 metres away or a big explosion,” Kevin Cuer, who lives on the 4th floor of a building in Montélimar, told AFP.

He said that “everyone went out on the street after the earthquake, people were very scared, we thought, and hopefully it will stop soon”.

“I felt my legs shaking, I felt like I was going to fall, my cotton legs, I sat down and understood that there had been an earthquake,” said Nathalie Lefèvre, a resident of Vallon Pont d’Arc, in the Ardèche region.

Another resident, in Privas, told AFP: “I was leaning against the oven of my mother’s bakery when I felt it shake. A customer’s dresser moved and all her dishes were broken.”

After the earthquake, the Vaucluse fire brigade received “about fifty calls, mainly from municipalities located in the north of the department, including Bollène and Valréas”, a spokesman told AFP.